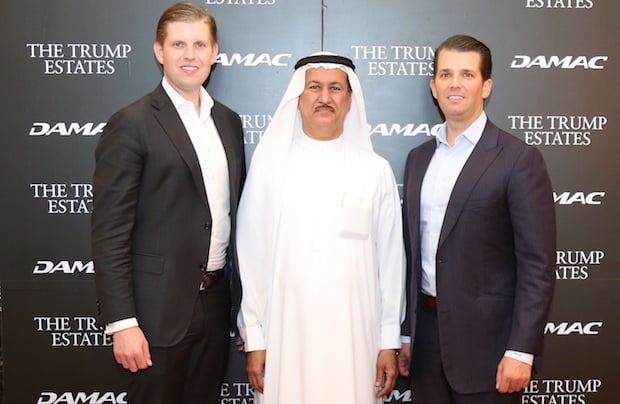 US President Donald Trump’s eldest sons Donald Trump Jr. and Eric Trump were guests of honour at the opening of a Trump-branded golf course in Dubai on Saturday, the first Trump property project launched since their father’s inauguration.

Speaking on a stage in front of the clubhouse at the Trump International Golf Club Dubai, Donald Trump Jr. praised the development of the United Arab Emirates (UAE), a close U.S. ally that is also a global trade, transport and tourism hub.

“To see the incredible vision Sheikh Mohammed has been able to put forward for this country is truly awe-inspiring,” he said, referring to UAE Vice-President, Prime Minister and Dubai ruler Sheikh Mohammed bin Rashid al Maktoum.

“As a developer, which lets us be somewhat artists at times, it is truly incredible to be part of that vision.”

A ceremony featuring fireworks and a classical music ensemble marked the opening of the project announced by the Trump Organisation and Dubai-listed developer Damac Properties in 2013.

The relationship between President Trump and Damac chairman Hussain Sajwani came under scrutiny last month when then-President-elect Trump said without elaborating that he had turned down a $2bn deal offered by Sajwani because he did not want to “take advantage”.

President Trump’s sons praised their close relationship with Sajwani in their remarks. Eric Trump said Sajwani was “a great friend” with a “truly amazing family”.

“We are going to have a lot of fun years together and this is just the beginning of those days,” Eric Trump said.

The Trump International Golf Club Dubai is part of a 42 million square foot wider development known as Damac Hills, according to Damac. Sajwani said it was the first new golf course to open in the city in “many years”.

Trump has been criticised for not distancing himself enough from his family business, the Trump Organization, since he was elected president in November.

Damac pays a licensing fee to the Trump Organization to use the Trump brand.

Last month, before the inauguration, Trump announced that he would maintain ownership of his global business empire but had handed control to Donald Jr. and Eric while he is President.

The Trump organisation would not enter into any new overseas deals while he is President, Trump adviser Sheri Dillon has said.