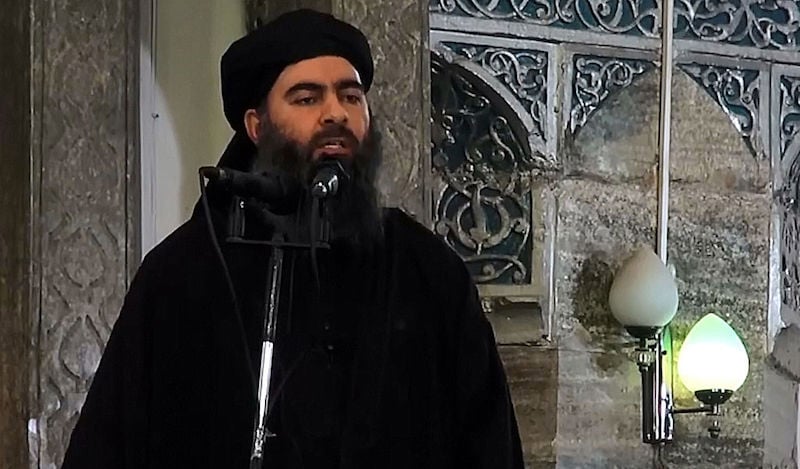 President Donald Trump said Abu Bakr al-Baghdadi is dead after a U.S. military raid in northwest Syria that left the ISIS “in utter fear, in total panic and dread” in his final moments.

The President said other countries should now fight ISIS, and that removing al-Baghdadi was bigger for the US then killing Osama Bin Laden, the al Qaeda mastermind of the 9/11 attacks in 2001.

“Last night the United States brought the world’s number one terrorist to justice,” Trump said Sunday in an announcement in the Diplomatic Reception Room at the White House. Answering questions from reporters, Trump said the U.S. has in its sights the likely successors to al-Baghdadi.

No U.S. personnel were lost in Saturday’s operation, while “many” of al-Baghdadi’s fighters or companions were killed with him, the President said.

Al-Baghdadi’s body was mutilated after he detonated a suicide vest while fleeing into a dead-end tunnel, also killing three of his six children, but DNA test results provided a positive identification, Trump said. The President watched the operation Saturday in the White House Situation Room from about 5 p.m. EDT with Cabinet members and top military and intelligence officials.

The President gave detailed information about the operation during a 10-minute speech and about 40 minutes of answering questions from reporters.

“When we landed with eight helicopters, a large crew of brilliant fighters ran out of those helicopters and blew holes into the side of the building, not wanting to go through the main door because that was booby-trapped,” Trump said. “It was something really amazing to see.”

“He died after running into a dead-end tunnel, whimpering and crying and screaming all the way.”

Trump describes the moment Abu Bakr al-Baghdadi, the founder and leader of ISIS, died during a targeted raid pic.twitter.com/525BLSDexd

Al-Baghdadi was the highest-ranking terrorist leader killed or captured since bin Laden was killed in 2011 during the Obama administration. The operations by U.S. Special Forces focused on the northwestern province of Idlib, according to one of the people, who asked not to be identified discussing the matter.

“Our reach is very long,” Trump said. “Baghdadi has been on the run for many years, long before I took office. But at my direction, as commander in chief of the United States, we obliterated his caliphate 100 per cent in March of this year. Today’s events are another reminder that we will continue to pursue the remaining ISIS terrorists to their brutal end.”

Trump said didn’t tell House Speaker Nancy Pelosi or others in the Congressional “Gang of Eight” ahead of time, as is customary, suggesting he was worried that word of the operation could have leaked out.

Representative Adam Schiff of California said it was a wrong of Trump not to notify key lawmakers.

“That was a mistake, but let’s not lose sight of the fact that it was a success and a ruthless killer has been taken off the battlefield,” Schiff, chairman of the House Intelligence Committee, said on ABC’s This Week.

The Syrian operation was built on CIA planning, a person familiar with the matter said, denying a report from Iraq that intelligence from that country’s government played a role. Trump didn’t hesitate to give the order to proceed, the person said.

“The President was taken options earlier this week,” U.S. Defense Secretary Mark Esper said on CNN’s State of the Union.

“He reviewed them, asked some great questions, choose the options that we thought gave us the highest probability of success and confirmation that the head of ISIS would be there and either captured or killed. And then we executed from there.”

Trump said a tweet sent late Saturday night that “Something very big has just happened!” was sent shortly after the operation was completed and U.S. military helicopters had returned safely to “a friendly country” he didn’t name.

Trump at the White House thanked Russia, Turkey, Syria, Iraq and the Syrian Kurds for their help in the operation. At this point those countries should fight on against ISIS, Trump said. “We’re out.”

The U.S. will continue to “secure the oil,” Trump added. Esper on CNN said the U.S. is prepared in case ISIS lashes out after al-Baghdadi’s death. “We’re going to watch carefully next steps and as a new leader and leaders pop up, we’ll go after them as well,” he said.

Previous reports that al-Baghdadi had been killed proved to be premature. In April, ISIS released a video of a man the militant group identified as al-Baghdadi, in what would have been his first appearance in five years. The video was released a month after the militants were driven out of their last stronghold in Syria.

The U.S. operation in Syria appeared to involve cooperation from various forces in the region. Iraq provided “precise information” to coalition forces that “contributed to reaching the terrorist al-Baghdadi and killing him,” the state-run Iraqi News Agency reported, citing an intelligence official it didn’t identify.

The U.S. also informed Turkey before the raid, with a senior Turkish official saying that al-Baghdadi had arrived at the Idlib location 48 hours before the strike. The official wouldn’t confirm whether Turkey had shared intelligence with the U.S. to facilitate the operation, but pledged continued cooperation with allies in the fight against ISIS.

The death of al-Baghdadi is a boost to Trump, who’s faced bipartisan criticism after his Oct. 6 announcement that he would pull U.S. forces back in the face of a Turkish military offensive in northern Syria. The move prompted even Republican supporters of Trump to say he was abandoning Kurdish allies of the U.S. who had helped defeat ISIS’s “caliphate.”

Secretary of State Michael Pompeo said Saturday’s operation showed how the U.S. remained committed to pursuing terrorists even after the withdrawal of troops. “Baghdadi’s demise is further evidence — available for all to see — that the United States will not stop in the pursuit of bringing evil to justice and delivering on our promise to do everything in our power to keep America safe and to bring this scourge to its knees,” he said in a statement.

The Kurdish-led Syrian Democratic Forces, who led the fight against ISIS on the ground in Syria, said they were involved in the “successful and effective operation,” and will keep working with global partners in the fight against the terror organisation, according to a tweet by SDF spokesman Mustafa Bali. In an interview with CBS Face the Nation on Sunday, Vice President Mike Pence also cited the SDF’s role in Saturday’s operation.

In a separate statement, however, the SDF was also critical of Trump’s broader withdrawal from Syria. The operation, it said, was the result of more than five months of work between U.S. intelligence and the SDF, but was delayed in the final stages because of the Turkish invasion of territory controlled by the SDF following Trump’s decision to pull U.S. forces out earlier this month.

“This operation was delayed for more than a month because of the Turkish invasion of our areas,’’ the SDF said, pointing out that al-Baghdadi had been staying in “areas controlled by the Turks”.

Idlib province, where the raid was conducted, isn’t in the region where U.S. forces were based or withdrew from following Trump’s decision. Instead, it ’s been a refuge for jihadist forces, many with links to al-Qaeda, that had held off efforts by Syrian President Bashar al-Assad’s military to retake the region. It has increasingly become the focus of Syria’s efforts, backed by Russia, to secure control over the country after more than eight years of civil war.