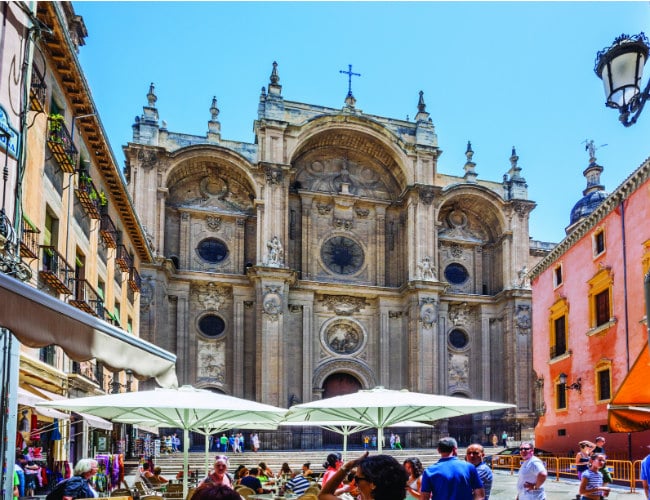 Treading the winding, cobbled streets of Granada’s Albayzin district, with their narrow alleys, beautiful Moorish architecture and the iconic Alhambra in view, is like taking a step into Spain’s rich and mesmerising past.

Of course, the southern city was born long before Spain became Spain in the late 15th century, established in the 11th century when the region was known as Al Andalus – also referred to as Muslim Spain.

With its roots in Islam – when the sprawling empire spread at its peak to the southernmost tip of France – Granada is still the jewel in Andalusia’s crown. Proudly exhibiting its Muslim and Christian heritage throughout the city, its main draws are not only visitor attractions and monuments, but also the preservation of a bygone era – offering a taste of living history as you traverse the labyrinth of the old city.

It is fitting that Granada brings tourists of all – or no – faiths to its gates. Despite the Reconquista and subsequent persecution of Muslims from the end of the 15th century, the city is feted as an example of tolerance and coexistence that flourished for inhabitants and visitors of all backgrounds and beliefs.

Nowhere is this mix better witnessed today than at the 14th century Alhambra palace – one of Granada’s two UNESCO World Heritage Sites, the other being the Albayzin itself.

No trip to the city is complete without a visit to the iconic attraction and its stunning gardens, known as Generalife. Tickets can be bought at various outlets across the city from EUR14 per person, with tours from a number of operators. The visit is one that you should plan ahead for, especially during peak seasons. And you can expect to be surrounded by hoards of other tourists eager to see the palace’s dazzling and intricate architectural design.

Away from the Alhambra, Granada is full of events and attractions worth seeing. The best way to explore the history of the city is with the help of a tour guide. Individual and group tours are in plentiful supply and our own experience was an informative and entertaining journey through time, punctuated by art, beauty, intrigue and tragedy.

If you choose to go it alone, a hop-on, hop-off tourist train makes light work of the Albayzin’s otherwise energy-sapping inclines, leaving you free to enjoy some homemade ice cream from Helados San Nicolas as you take in the best view of the Alhambra from Plaza San Nicolas. My advice is to try the lavender flavour.
A stone’s throw from San Nicolas is Plaza Larga – home to a lively morning fruit and vegetable market that is ideal for those staying nearby. It is also the location of one of the city’s better flamenco restaurants – Jardines de Zoraya – a popular spot for locals and visitors alike, where you will find an excellent menu as well as enjoyable music and dance performances.

If you’re looking for a more authentic flamenco experience, however, look no further than the cave-taverns of the neighbouring Sacromonte. Here, in the old ‘gypsy district’ you will find the art in its most raw and potent form, communicating the passion, pain and power of its origins.

However, temper your thirst for authenticity with a critical eye for tourist traps – advice that can extend to Granada’s dining options of diverse quality.

Be selective and don’t be afraid to ask locals for their recommendations. Tapas bars are a dime a dozen and while the lure of the tourist centres of Plaza de Bib Rambla and co might be hard to resist, you’re more likely to find good food among the city’s many side-streets.

Given its history it’s no surprise that there is a good number of halal options for Muslim travellers, including excellent seafood. ‘Vino y jamon’ is very much the standard for Spanish restaurants, however, making for a typically lively atmosphere when the sun goes down.

Small bites such as pastries and the obligatory churros and chocolate are generally of a high standard, and coffee aficionados shouldn’t miss the tiny but first-rate La Finca, while ice cream fans should follow up their lavender treat with a trip to Los Italianos. 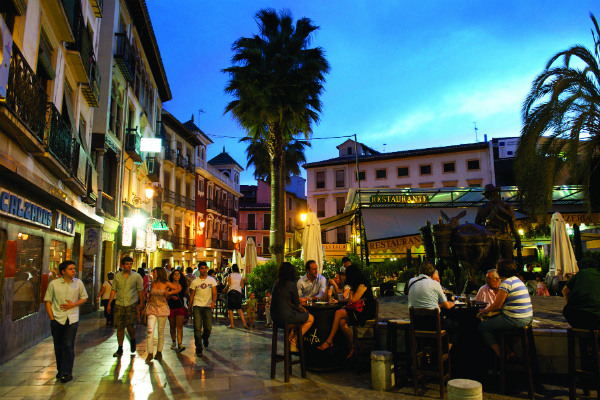 Back on the tourist trail, the impressive Cathedral dominates the downtown area. Completed in 1561, the religious centre of Granada’s Catholic community is a popular draw, especially given the retention of the historical feel of the surroundings. The old corn exchange, Royal Chapel, smaller churches and Arabic souq add extra layers of intrigue to the area. You can even buy a medieval-style sword or two, if you fancy your chances of getting it through customs.

Another historic monument is Corral del Carbon, close to the Cathedral. Built in the 14th century as a coal yard, it was adapted in the 16th century to be used for stage performances – a role it still performs today. If your visit coincides with a show, the open courtyard – covered in vines – could provide the setting for one of the best nights of your trip.

For those craving something a little more modern, the open-air science museum – Parque de las Ciencias – is a fun experience: especially for those with inquisitive children.

With more than 270 interactive activities spread out across the 30,000-square-metre park, there is never a dull moment. The planetarium, tropical butterfly house, observation tower, astronomy garden, biosphere and other sections make this a place to dedicate a good amount of time to – especially given that it is outside the centre, in the south west of the city. Standard tickets cost EUR7, concessions EUR6, with an extra EUR2.50 or EUR2 for the planetarium.
Even further afield, nature lovers will relish the opportunity to ascend the Sierra Nevada mountain range – the imperious and eternal backdrop to Granada, which rests in its foothills.

Parts of the range have been declared a National Park, as well as a biosphere reserve, making it a popular destination for a variety of visitors throughout the year. Hikers, climbers, bikers, fauna enthusiasts, photographers and skiers (yes, the mountain can get a lot of snow) can frequently be found out in the wilderness or making use of the range’s activity centre, bikepark and entertainment events.
For accommodation in Granada, take your pick from converted art hotels in the shadow of the Alhambra, downtown palacios, budget hotels and private lets – concentrated in Albayzin.

If you’re tempted to go down the private let route, be sure to confirm with the owners that there is air conditioning – especially during the summer months. This particular lesson was learned first-hand.

With Europe’s recession hitting Spain more than most, prices are competitive but perhaps slightly higher than other cities across the country owing to its unerring popularity as a tourist destination.

The effects of the economic downturn can be felt the further away you get from the historic centre, but if you have the time to get out of Granada, the city also serves as a base to visit other cities in the south, such as Cordoba, Seville and Malaga – all with their own charm.

Overall, there is a lot to enjoy in Granada and Andalusia in general. With one foot in the past and the other in the present, the city’s vivid history, beautiful architecture and proud spirit combine to offer a sweet taste of old Al Andalus.