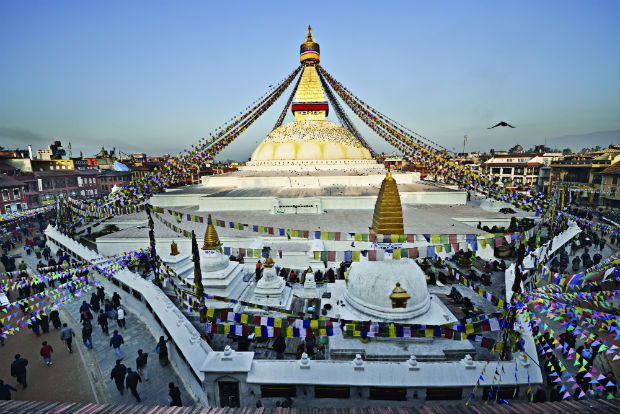 Kathmandu is one of those cities that combine bustle and tranquillity in almost equal measure. Throughout much of this potholed, rickety city, barely a second passes without an orchestra of car and motorcycle horns announcing their owners’ presence in narrow, uneven streets.

Yet there are areas of Kathmandu where almost complete silence prevails. Where only the low ebb of chatter can be heard above the wind and the murmur of the city beyond. Such a place is Boudhanath, one of the holiest Buddhist sites in the city.

Located in the north-eastern extremities of Kathmandu, the dome-shaped stupa (shrine) of Boudhanath is surrounded by multi-story, occasionally higgledy-piggledy, modern buildings, many of which house rooftop cafés and restaurants. The buildings act as soundproofing against the city outside, and in one of the cafés sit my son and I.

It’s the tail end of December and the weather, although chilly, is blessing us with blue skies and a bright sun. three or four stories below, a gentle tide of people stream by, circling the shrine and every now and then climbing its stairs to walk along the stupa’s gentle lower gradient.

We have lunch, we drink beer, we talk of our short, two-day break in the city. Eventually we descend to street level, where our guide explains the significance of Boudhanath and much of the rest of Kathmandu. He is already familiar to us, having travelled with us from Pashupatinath temple near our hotel in Battisputali to Boudhanath earlier in the morning.

When we first arrived at Pashupatinath temple in the early morning, two separate plumes of smoke rose steadily into the air before being swept south by the wind.

Skirting the temple and heading towards the banks of the Bagmati River, we briefly entered a retirement home founded by mother teresa before heading for the source of the smoke. The two-tiered temple of shiva is built in a nepalese pagoda style and is inaccessible to non-hindus, but panoramic views can be obtained from the opposite bank of the Bagmati River, either near the water’s edge or atop manmade terraces that work their way up a hill overlooking the temple complex. It is from these terraces that the source of the smoke becomes apparent.

Two open-air public cremations are coming to an end, and another is about to begin. Hundreds of people line the stepped riverbanks and a single arched bridge that crosses the relatively narrow expanse of water, while onlookers in the upper decks of the temple peer downwards, watching what is essentially a private and personal affair. As family members circle the body, a woman begins to wail, before the pyre is lit and smoke once again begins to fill the air. Throughout much of the proceedings a man sporadically attempts to sell us a Nepalese singing bowl.

We head to Boudhanath in a taxi before crossing town to the tourist district of Thamel. Its streets are uninspiring, sparingly populated and lined with shops selling identical products, so we wander aimlessly – northwards as it turns out – through streets that become progressively busier and louder. We pop into a bar with an old TV blaring out Nepalese commercials and then continue on our way, passing beautiful young women, families on scooters, food stalls, rickshaws, and cars barely able to squeeze past pedestrians. Some of the lanes are little more than broken dirt tracks, whilst others are paved and occasionally break out into miniature squares.

By accident we stumble across Basantapur Durbar Square, home to the Hanuman Dhoka palace complex, and a respite from the manic congestion that had preceded our arrival. Spread over a number of acres, the square is home to palaces, courtyards, and temples, many of which are adorned by young couples and families enjoying the country’s solitary weekly day off. The top floor of the palace complex is accessible via a dimly lit, narrow, steep and precarious set of wooden stairways, but the climb reveals panoramic views of the city below. You can even see the southern end of the square, where our guide informs us a living goddess is resident.

In the Kumari Chowk, a courtyard overlooked by intricately carved wooden balconies and windows, we await the goddess’ appearance. Many give up, but we persevere – primarily out of curiosity – and when the Kumari finally appears at a central upper window, it is for barely 10 seconds. She is heavily made up and looks bemused – bored even – rather than divine. She is simply a manifestation of the Nepalese tradition of worshiping pre- pubescent girls seen as human incarnations of the Hindu mother goddess, Durga.

Later that evening we leave the beautiful Dwarika’s Hotel in Battisputali and head for Bhojan Griha in Dilli Bazaar. Situated in an old mansion with no apparent signage indicating that it is, in fact, a restaurant, Bhojan Griha is nevertheless an enjoyable affair. A procession of Nepalese dishes is served as dancers and musicians entertain us, whilst shots of raksi are washed down with giant bottles of Everest beer. When we exit a few hours later, the world is a merrier place and our taxi driver is, thankfully, still waiting for us.