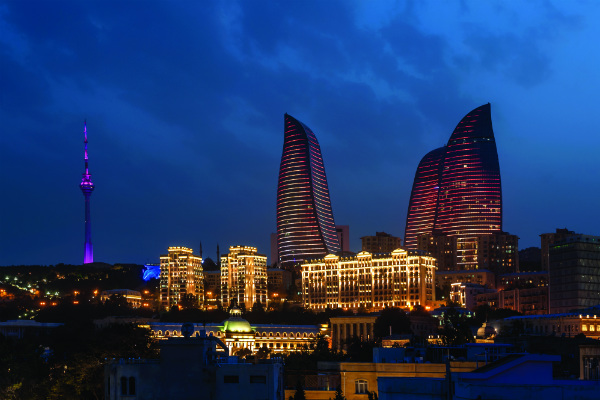 Erstwhile host of the Eurovision Song Contest. Home to the newest Formula 1 Grand Prix. City of beautiful European architecture. Waterfront views to die for. None of these are descriptions you would expect of Baku, the capital of Azerbaijan, and yet all are accurate.

Due to its chequered history – previously falling under the Ottoman Empire and the Soviet Union before gaining independence in 1991 – and allegations of corruption, gangsterism and political dynasties benefitting from ill-gotten gains, this oil state is not the first choice destination for most tourists. But that is a crying shame. For it really is a fascinating spot, where east meets west. A destination where one paradox after another presents itself.

Navigating through the old town, for example, is a joy with its old cobbled streets, stunning period architecture and landmark spots including the Maiden Tower, Shirvanshah’s Palace, the Museum of Miniature Books, the Icherisheher Centre for Traditional Arts and much more besides.

In deep contrast, new iconic buildings have been springing up across the city – as it attempts to diversify its economy away from fossil fuels and towards tourism. Although many projects have halted with most cranes now motionless across the city, some stunning developments were completed before the low oil price forced a rethink.

The Flame Towers, which somewhat inappropriately (given the number of skyscrapers that become towering infernos across the world) light up as if on fire with electronic lights at night, are quite something. Then there is the Ferris Wheel, National Flag Square, the Philharmonic Fountain Park, the weird and wonderful Carpet Museum and the poignant Martyrs’ Lane. The latter being a cemetery and memorial, in Kirov Park, remembering those killed by the Soviet Army in 1990 during the fight for independence.

But the most striking landmark of all is the Heydar Aliyev Cultural Centre, a futuristic structure by the now deceased Iraqi-British architect Zaha Hadid. Its animal-like swooping curves house a conference centre, gallery and museum. In fact, almost all of modern Baku has a sharp element of design. Even benches and waste bins include some sort of creative aesthetic.

In short, it is a pretty city. State money is certainly being invested in the urban landscape or at least it was when the oil price was still high.

Luckily, a good deal of investment also went into a new terminal at Heydar Ailyev International Airport – which opened in 2014. The organic-looking building seems to take its inspiration from Hadid too – although it was designed by the Turkish studio Autoban – and her focus on the natural world as a guiding principle for architecture. The shell-like structures inside the building – housed within what looks like a starfish from the outside – are warm and inviting, making for an excellent passenger experience.

Unfortunately, I cannot say the same of my time aboard Azerbaijan Airlines.

It ranked among the worst flights I have ever experienced, smacking of cheap quality and a lack of investment. The cabin crew were miserable and unhelpful at best, the entertainment system did not work and the tea was served without milk. There was no on board food unless you paid extra for it, as was the case with any baggage – meaning check-in took forever as people were forced to go to another counter to pay the excess luggage charge and then return to get their boarding pass.
If the country wants to follow Gulf states like the United Arab Emirates in developing a thriving hospitality hub, it will also need to invest in aviation as well. As things stand, the airline would seem to be in dire need of professionalisation and modernisation. No matter if people enjoy Baku, if the plane journey in and out is substandard then that is what they will remember. Tourism 101, folks.

There are other negatives to speak of too. The streets are teeming with police. What is wrong with that, it is a good thing – you might say. Well, ordinarily yes, but there do seem to be lots of overly friendly handshakes between the law enforcement officials and shady looking men in suits on almost every corner. This only reinforces the notion of corruption being endemic. Like the problems with the airline, this will need to be addressed if the Azeris are serious about creating a world-class tourist destination on the shore of the Caspian Sea.

Which brings me to another critique. The newly developed promenade along the seafront is beautiful. However, the sea itself resembles an oil slick. Walk too close to the sea wall and you can smell and see oil sludge floating on the surface. I can only guess at the damage such oil leaks out at sea have caused to the marine life. It is certainly a bad advert for the city and the country, at what is effectively its shop window location for tourists.

Overall, it is safe to say that if you are adventurous enough to venture to Baku for a holiday, you will find many surprises. Many of these, but not all, are positive. In a place that has experienced so much change in such a short period of time, the transition to a modern market economy is understandably not quite yet complete. For the seasoned traveller seeking out new experiences, this might actually be part of Baku’s charm. For others, it will be the bête noire.