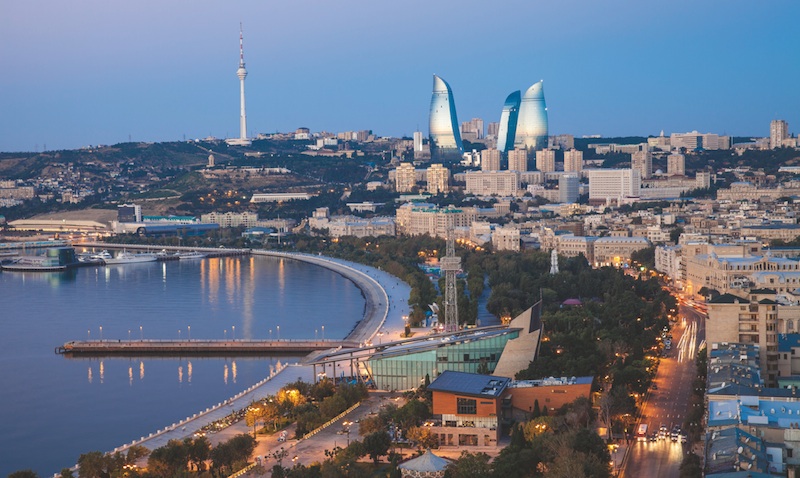 If mud-spouting volcanoes and a mountain fire that’s been burning ceaselessly for the last 4,000 years are things you want to tick off your travel bucket list, Azerbaijan is the place to go.

Located on the edge of the Caspian Sea, the tiny country is perhaps best known for its oil wealth and as the host of the Eurovision Song Contest in 2012. But Azerbaijan has much more to offer.

The place that most tourists start from is the capital city of Baku. A city of contrasts, Baku offers an interesting glimpse into the past and the future of the Caspian region, while also juxtaposing man-made attractions with natural wonders.

Heavily influenced by the Ottomans and later the Soviet Union, the culture and mannerisms of the Azeri people have been moulded into a unique blend of Arab hospitality combined with a love for Russian music and style. Beautiful architectural behemoths rise in the midst of the city, while stark Soviet-era structures continue to dot the countryside.

Meanwhile, at the centre of the city – which seems to be modelling itself to resemble the futuristic skyline of Dubai, tall, glass-façade buildings – such as the famous Flame Towers – shine bright at night; a symbol of the country’s vast oil wealth.

There’s no doubt that the recent drop in oil prices has hit the country hard – a drive across the edge of Baku presents an eerie view of motionless oil pumps, silhouetted against the sky.

But the economic impact of the oil price drop has also forced the country to look at diversifying its revenue sources, with tourism emerging as one of the main drivers.

Getting around using public transport can be difficult, but most hotels organise tours – which are quite reasonably priced. Also, if you would prefer to wander around within the main areas of the city on your own, audio guides are available to accompany you on long walking trails.

The must-see for any visitor to Baku is the old part of the city, which remains nestled within a massive fort wall. Lined with narrow cobbled streets and alleys, the Old Town (called Icheri Sheher) includes attractions such as the Shirvanshah Palace and the Maiden Tower.

The vast palace, a reminder of the opulence enjoyed by the erstwhile rulers of the country, revives a grim memory right at the entrance – bullet marks on the wall, representing the horrors of the 1918 war with Armenia.

Climbing up the 29.5 metre high Maiden Tower is also an interesting experience, with the structure offering views of the city and the sea from tiny peepholes on the way up before the grand view at the very top. Each landing floor offers some fascinating information about the construction of the tower, including the several legends behind its name. The most popular myth is that the tower is named after a princess who tragically killed herself by jumping from the tower. 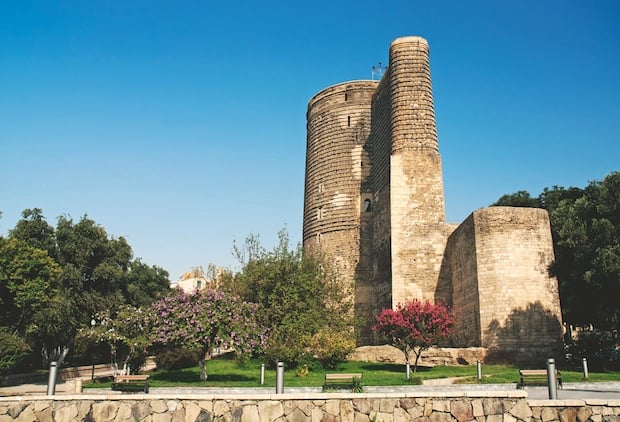 Along with these two main structures, the old city is lined with ancient residences and mosques, colourful graffiti, loud shopkeepers hawking a variety of souvenirs and the characteristic caravanserais, offering food in traditional Azeri style.

Another landmark within Baku that evokes a reaction of awe is the Heydar Aliyev centre designed by the late Zaha Hadid. A favourite for selfie backdrops, the iconic white wavy-shaped architectural masterpiece hosts a multitude of cultural events. The artistically- sculpted carpet museum is also worth a visit, especially to appreciate the intricacies of weaving. 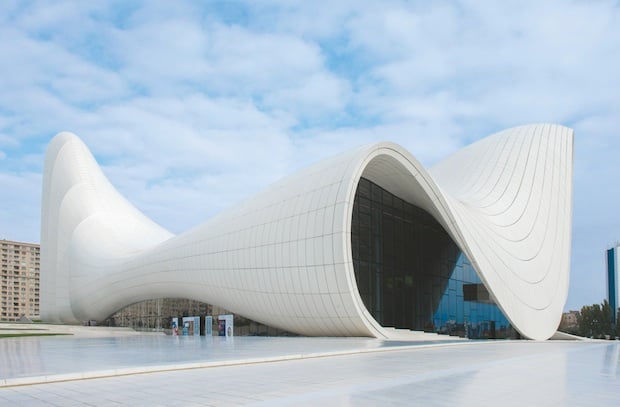 But to truly see the extraordinary in Azerbaijan, you need to leave the confines of Baku.

A day trip will take you to the ancient site of Gobustan, where petroglyphs (rock paintings) dating back thousands of years remain well preserved on the mountainside. The interactive museum onsite provides all the history and information you need about the UNESCO-heritage site. 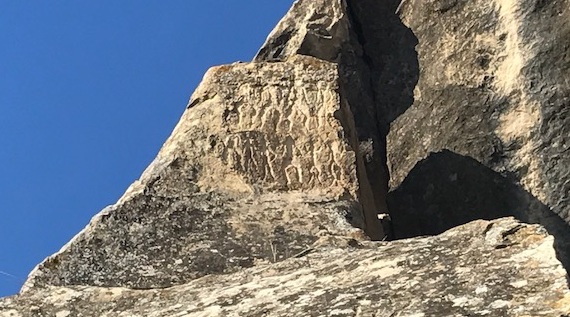 Most tour operators will combine another must-see attraction with the Gobustan trip – the truly amazing mud volcanoes. Incessantly spouting thick grey mud, these unique volcanoes can be explored up-close (yes, you can also touch the oozing mud). 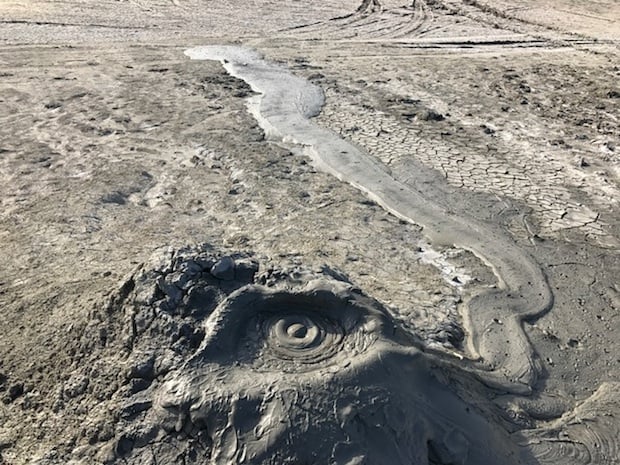 Another day trip from Baku that warrants a slot on your itinerary is a visit to the fire temple ‘Ateshgah’ and the burning mountain ‘Yanardag’. 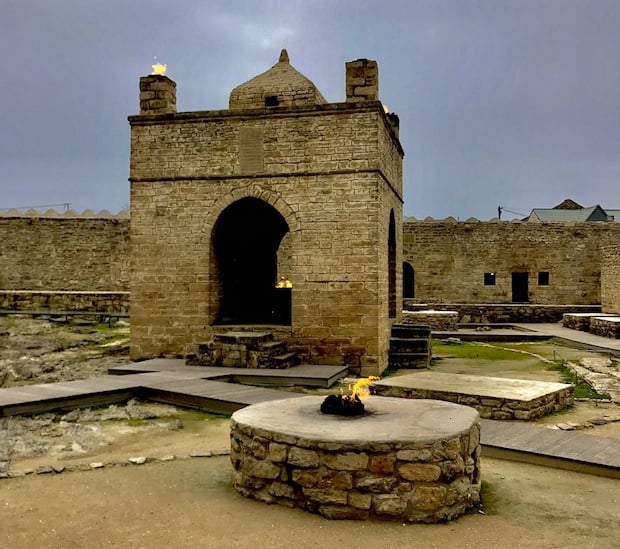 Ateshgah, built in a region that previously boasted natural gas reserves, was used a place of worship by Hindus and, even further back in history, by Zoroastrians.

Another pocket of natural gas lights up the mysterious flames that lick the edge of the Yanardag mountain, a phenomenon that has been witnessed for the past 4,000 years (according to our guide). Although nobody really knows when the fire started. 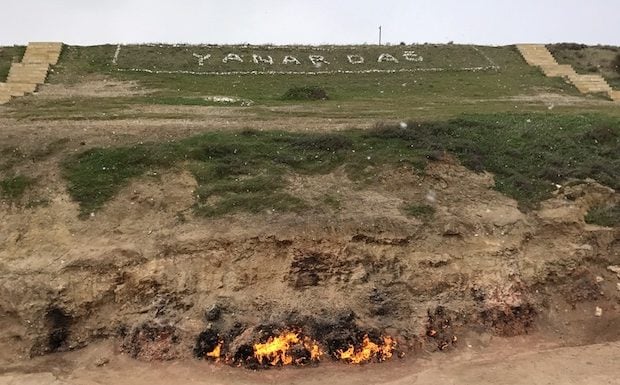 Also not to be missed is the Gala historical and ethnographic museum, located some 40km away from Baku. Climb rickety stairs of the old-time houses preserved at the archaeological site to sneak a peek into how Azeri people lived in the past. You can also say a quick hello to the well-maintained camels, donkeys and other farm animals grazing lazily at their stalls.

A mere two hours away from Dubai, Baku is well connected by air and makes for a perfect weekend getaway. But to truly appreciate the wonders of the fire country, extend your stay, head out of the city and begin exploring.