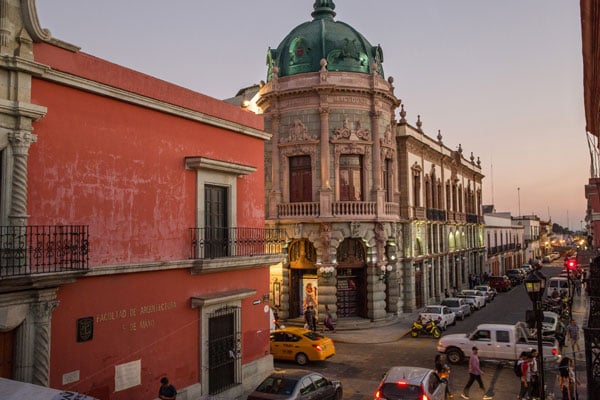 Even as strong earthquakes have shaken the region, the centuries-old city of Oaxaca remains largely unrattled.

In the shadow of Monte Albán, the hilltop capital of the Zapotec civilization, this multicultural hub in the highlands of southern Mexico was once a quiet regional centre. In recent years, the city has been transformed, for better or worse, as bohemian expats and artists have been drawn to its mild, semi-tropical climate, sturdy Spanish colonial architecture, rich culinary and craft traditions and thrilling art scene.

Galleries, boutique hotels and upscale restaurants have opened in dizzying succession. Increasingly worldly, it remains a place where Mexico’s perilous and complex history reveals itself in ways both beautiful and brutal.

Opened in 2011, the Centro Cultural San Pablo is housed in a former 16th-century Dominican convent and set around a tiled patio etched with bright green moss. The beautifully restored centre has multiple exhibition and performance spaces, including one in the Rosary Chapel, and showcases everything from Oaxacan crafts – ornately carved ‘alebrijes’ (whimsical wooden statues), indigenous textiles and traditional black pottery – to pop art, photography, string quartet performances and even the odd adults-only marionette show.

The complex also has a cafe, an indoor children’s play area, a research library and a terrace restaurant popular with local bigwigs in natty business suits, which makes for excellent people watching. 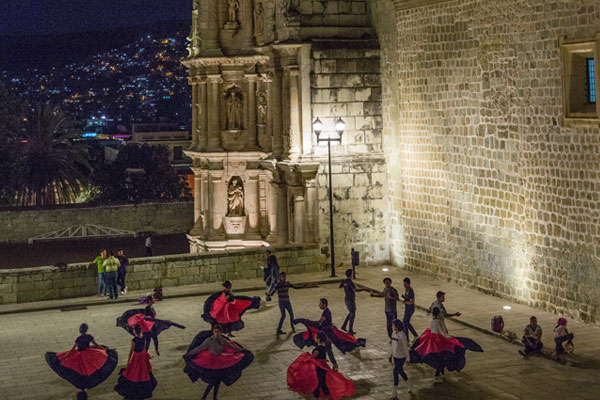 Sample the daily selection of ‘guisados’ ($1.30) – the miscellaneous stews that traditionally fill street tacos – like ‘huitlacoche’ (corn fungus), potato with ‘chile de agua’ (a light green pepper popular in the region) and ‘rajas’ (strips of mild poblano pepper) with cheese.

Specials, including house-made craft beverages and ‘pulque’ (fermented sap from the maguey plant) flavoured with celery, mango or oats, are advertised in multicolour chalk around the art-filled, two-room dining room.

Completed in 1909, one year before the Mexican Revolution, the grand Macedonio Alcalá Theatre took six years to build. A baroque Renaissance-inspired facade topped by a green dome with an interior painted with portraits of artists and writers, the theatre is among the most unusual buildings in Oaxaca’s Spanish colonial city centre.

The striking structure hosts everything from operas and Latin American art house films to the Oaxacan symphony orchestra and book festivals. Drop by the ticket office to view the event calendar and request a tour of the century-old building. 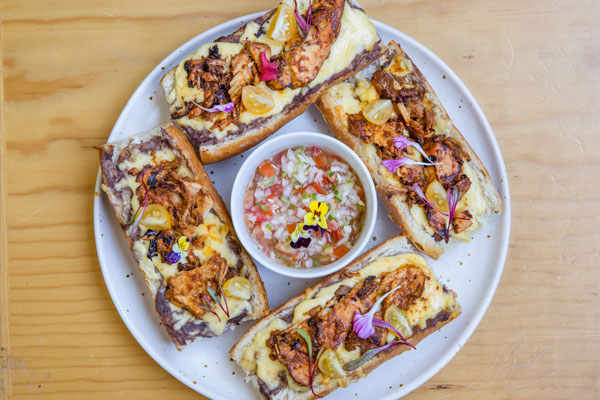 Eating pizza in a city revered for its regional Mexican food may seem like sacrilege. But the exceptional pies at two-year-old La Matatena are a worthwhile diversion. The mom-and-pop restaurant serves thin-crust pizza ranging from the traditional (pepperoni or margarita) to distinctly Mexican combinations like Oaxacan chorizo and roasted poblano chilies or ‘chapulines’ (grasshoppers) and tomatoes.

The10-inch version (starting at $5.30) makes an excellent evening snack for two (vegan and gluten-free options are also available). Other offerings include Argentine-style empanadas ($3.20). 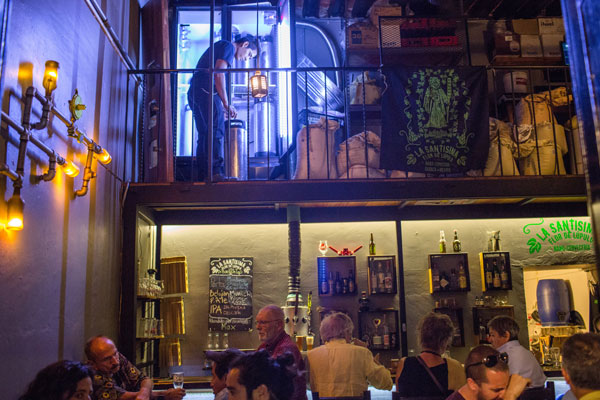 Stray from the pricey boutiques and souvenir shops lining the streets around Plaza Santo Domingo’s tourist district and seek out the graffitied workshop and showroom of Miku Meko Atelier, which sells traditional and contemporary textiles and doubles as a community space, offering classes in everything from backstrap weaving to button-making.

Guibani Artesanal does one thing (and does it well): weaves colourful, artful housewares and furniture, including the Acapulco chair, from bright vinyl cording. For keepsakes that can fit in a suitcase, consider a lidded tortilla basket or a set of funky coasters. The sprawling new six- room popular art marketplace, Andares del Arte Popular, offers expertly made traditional crafts – everything from black ceramics to woven rebozos to pressed tin mirrors and ornaments – at responsible prices.

The coastal offerings include subtle, flavourful ceviches in four styles, including a squid ink, chorizo and peanuts version, and another with tomatillo, cucumber, celery and serrano chilies. All styles come with your choice of seafood (fish, octopus, oyster, sea snail or shrimp) and in three sizes, starting at $4.25 for a small. 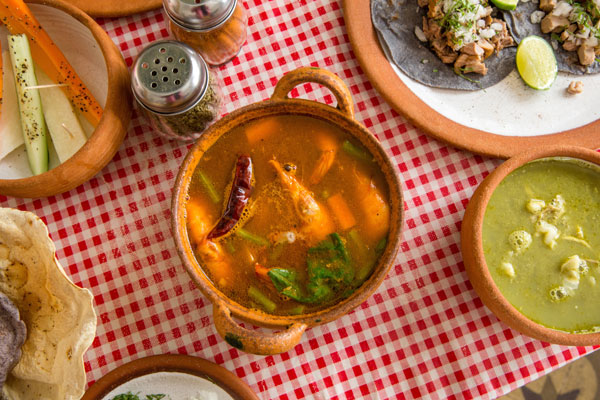 A six-table cupcake of a restaurant, with pastel pink and mint-green geometric shapes painted on its tables and paper flags strung across its ceiling, Casa Taviche is a casual spot with an outrageously affordable $4 menu del dia (three-course set menu). Served from 1pm to 10pm, the menu includes three handwritten options for each of the first two courses – ‘entradas’ (starters) and ‘platos fuertes’ (entrees) – along with the restaurant’s choice of dessert and agua fresca.

The options change daily, but include sophisticated dishes like a spicy pale green chile de agua stuffed with shredded chicken. Afterward, head to Casa Estambul, the mod art space and restaurant with wild, brightly coloured murals across its walls, and a glowing, bright pink bar. Here you will catch a glimpse of Oaxaca’s youthful nightlife.

11am: World class of its own

The chef behind the most celebrated restaurant in Mexico – Enrique Olvera of Mexico City’s Pujol, which is routinely listed among the best restaurants in the world – opened his first Oaxaca restaurant, Criollo, on an unassuming, out-of-the-way stretch of Avenida de la Independencia in 2016. The open-air dining area abuts an expansive cactus garden with an open ‘comal’ (a wood-fired griddle) and chickens and rabbits roaming the grounds.

While Criollo’s dinner service is among the city’s most extravagant, its weekend brunch is an a la carte affair with modest prices. These midday meals, while exceptionally well crafted, veer more traditional than the cooking for which Olvera is best known. Think mole enchiladas with organic chicken, cream and cheese ($5.25) or market-style quesadillas with herbed guacamole ($4.90).

Head to the Museo del Ferrocarril Mexicano del Sur and Oaxaca Children’s Museum. These twin institutions (both free), based in a renovated train depot and historic freight train cars, feature exhibits devoted to Oaxacan history, street-art- style murals on the rusted metal walls of once-abandoned box cars, a children’s library and a sprawling children’s museum with arts and crafts, a demonstration farm and an impressive playground that includes an in-ground trampoline.

On your way back to the centro, stop at Basílica de Nuestra Señora de la Soledad, where Sundays are bustling with families and children in their elaborate Sunday best. Jardín Sócrates, the tiled patio outside the 1690 cathedral, has a half dozen or so ice cream vendors selling dozens of exotic flavours, from rose petal to tequila to star fruit for $1.60.

The boutique hotel of one of Oaxaca’s most celebrated restaurants, seven-room Hotel Casa Oaxaca (García Vigil 407; 52-951-514- 4173; casaoaxaca.com.mx) is surprisingly tranquil for its location in the city’s busy centre. The backyard is planted with bougainvillea and cactus, with a swimming pool and a ‘temescal’, or sweathouse, which is available to non-guests for an hourly fee. Rooms start at $167.

The second location of the El Diablo y la Sandia (Boca del Monte, corner of Tinoco and Palacios; 52-951-207-7096; eldiabloylasandia.com), which goes by Boca del Monte or Mouth of the Mountain, is an artful, yet family-friendly and affordable, bed-and-breakfast with single rooms starting at $80.