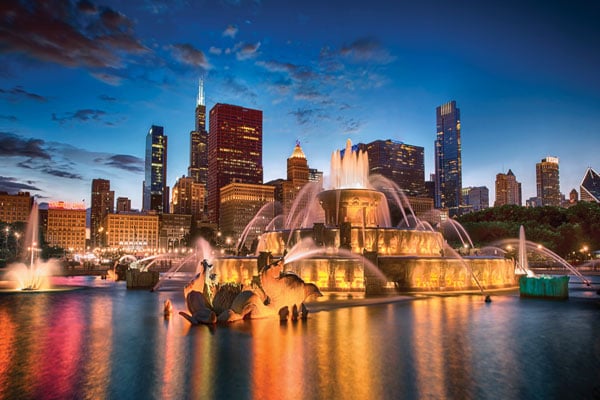 Chicago’s 77 neighbourhoods — including Lincoln Park, home to the new Wrightwood 659 gallery — offer myriad reasons to stray from the beaten path.

But lately the Loop, as the downtown district is called for the elevated train tracks that encircle it, is fighting for your attention with a new architecture centre, writers’ museum, river walk, design-centric hotels, destination restaurants and Art on the Mart, a digital art installation broadcast across a 2.5-acre building facade on the river.

All of the city’s train lines fan out from downtown, making it a great base from which to explore beyond, particularly for those in search of vibrant storefront theatres, design shops and more.

Two new cultural stars have concentrated the appeal of the Loop district. The former Chicago Architecture Foundation moved to a prominent riverfront location in August and, having added an intriguing museum with models of famous buildings worldwide, renamed itself the Chicago Architecture Centre.

The centre’s famous riverboat architectural tours ($47) run during much of the year, but out of river season, join one of the downtown walking tours ($26) that tell the story of Chicago’s design evolution. Nearby, the interactive exhibits of the American Writers Museum, including manual typewriters where patrons are encouraged to add to crowd sourced stories, bring the art of storytelling to life (admission $12).

At the new Bellemore, diners in the West Loop are treated not just to refined food and glamorous design, but the kind of pretension-free dining that characterises Chicago’s vibrant restaurant scene. Chef Jimmy Papadopoulos uses global ingredients and cooking techniques to create richly flavoured, multi-textured seasonal dishes including, recently, a salad with port-marinated pears ($14) and grilled lamb belly with eggplant, pickled grapes and chickpea crackers ($36). Menu splurges include the Instagram-famed oyster pie ($68), but guests need not succumb to enjoy what is simultaneously a down-home and dressed-up dinner while listening to David Bowie and ogling the taxidermy birds above the bar.

Chicagoans may be divided on the merits of deep-dish pizza, but when it comes to homegrown invention, no one disputes the reign of improv comedy. Members of the seminal Compass Players went on, in 1959, to form Second City, whose alumni range from Bill Murray to Tina Fey. Catch a late-night improv show at Second City’s slick Up Comedy Club in the Old Town district (tickets from $18). Or Uber about a mile west to iO Theatre, where the Improvised Shakespeare Company specialises in long-form improv using the playwright’s language to craft two-act comedies based on a single audience title suggestion (tickets $20).

For a panoramic lunch, dine at Cindy’s, the conservatory-like rooftop restaurant at the Chicago Athletic Association hotel overlooking Millennium Park and Lake Michigan. Share the generous seafood cocktail ($22) and cast-iron chilaquiles ($27) while taking in the views. Then continue north to the Chicago River to stroll on the 2-year-old Chicago Riverwalk, a 1.25-mile-long, water level promenade. In fair weather, the kayak launches, picnic lawns and cafes bustle, but even in the offseason the walkway offers good perspectives on the surrounding landmark high-rises.

After appreciating design in the city, take a souvenir home from a clutch of North Side shops that specialise in architectural salvage, modern design and antiques. Begin trolling at the vast warehouse where Architectural Artifacts trades in decorative building castoffs from wrought iron railings and wooden mantelpieces to terra cotta gargoyles as well as more portable art tiles and juggling pins. In the nearby Andersonville neighbourhood, visit Brimfield for vintage plaid blankets and college pennants. Next door, Scout deals in mid-century furnishings and funky finds, as well as Impressionist Chicago cityscapes by local artist Chuck Meyers.

Five major theatres in Chicago, including Steppenwolf and Goodman theatres, claim Tony Awards. But it is the city’s small, often storefront-based theatres (more than 200 of them exist) that form the backbone of the rich theatre community. Go intimate at A Red Orchid Theatre in Old Town where actor Michael Shannon is a founder. The ensemble-focused Strawdog Theatre in the North Centre neighbourhood is known for immersive staging of new works and rewritten classics such as Great Expectations. Steep Theatre in the Edgewater area has strong ties to contemporary playwrights such as Simon Stephens, and often stages searing shows before audiences of 60 or fewer, who toast performances post-curtain at the theatre’s new adjacent bar.

Some 18 miles of paved pathway edges Lake Michigan, the Great Lake that moderates much of Chicago’s weather. Biking is the best way to appreciate the city’s sparkling outdoor asset. Rent a hybrid, town cruiser or road bike from Bike and Roll Chicago at Millennium Park or Navy Pier (from $12.50 an hour) and head southbound for a traffic-free cruise and stellar skyline views on your return back north (the heavier Divvy shared bikes are another option at $3 per 30 minutes). Winter occasionally disrupts this plan, in which case head to Maggie Daley Park next to Millennium Park to skate on the meandering ice ribbon that simulates a frozen prairie path amid surrounding high-rises (free; skate rentals $14).

In recent years, the Museum of Contemporary Art (admission $15) has used innovative exhibitions such as the recently closed group show I Was Raised on the Internet and the current Picture Fiction on Kenneth Josephson’s conceptual photography to attract younger patrons, rejuvenating the gallery experience. Stop in to see how, then head to the museum’s new ground floor restaurant Marisol for brunch. Its chef, Jason Hammel, a farm-to-table pioneer with Lula Cafe in Logan Square, brings his savoury skills downtown to the fittingly modern space. Indulge in a house-made doughnut ($4) frittata ($14) and crispy succotash ($16), then walk it off on the nearby Magnificent Mile stretch of Michigan Avenue.

1. The 1929-vintage Carbide and Carbon Building newly houses the 364-room St. Jane Hotel in the Loop. Named for pioneering social worker Jane Addams, the hotel plans to donate 1.1 per cent of hotel revenue to a local charity. Guests will find local brands in the minibar and a destination all-day American brasserie, Free Rein, on the ground floor. Rooms from $269; stjanehotel.com

2. Though occasional downtown apartments come up on Airbnb, most rentals tend to cluster in more residential neighbourhoods. Those in the Old Town district tend to run from $64 to $130 and offer easy mass-transit access north or south via the Red or Brown Line trains. In the opposite direction and conveniently on the Red Line, look for good deals in Chinatown, where apartments start around $65. airbnb.com