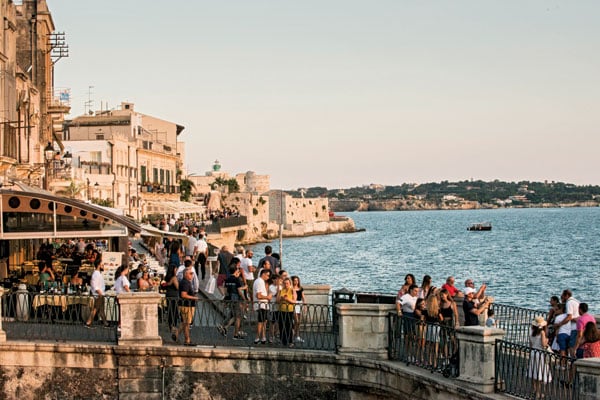 Founded by Greeks around 734 BC, the southeastern Sicilian city that Cicero called “the greatest and most beautiful of all Grecian cities” achieved a size and status in the ancient world that made it a rival of major powers like Athens and Carthage.

Takeovers and makeovers by Romans, Byzantines, North Africans, Normans and others left their marks as well, influencing everything from religious art to the region’s distinctive savoury-sweet-sour cooking style. Much of the ancient city has crumbled since Cicero’s day, although the ruins can still be explored in Syracuse’s celebrated archaeological park and museum.

But the main attraction today is the historical centre of Syracuse: Ortigia island, a maze of narrow streets, ornate Baroque churches and centuries-old palazzi. And if you’ve never seen the stunning sunset over the Mediterranean from Ortigia’s western promenade, add that to your To Do list.

A passeggiata, or evening walk, around the perimeter of Ortigia reveals many notable structures and stories. Start from the Parco Letterario Elio Vittorini, on the eastern side, and head clockwise. As waves crash against the rocks below the sea wall, you’ll pass crenelated lookout points and the chiselled facade of the 17th-century Chiesa dello Spirito Santo, before finding yourself in the palm-planted gardens of the 13th-century Castello Maniace.

Continuing up the western side leads you to the spot where the goddess Artemis is said to have transformed a nymph into a natural spring – the Arethusa Fountain – and then to another haven of liquids: an outdoor seaside bar called Fratelli Burgio al Porto. A bright orange Aperol spritz costs about $8. The matching sunset is free.

“Waiter! There are raisins in my vegetable medley!” Please don’t say this when your caponata arrives. The raisins are supposed to be there, along with the pine nuts, tangy vinegar-sugar reduction, and slow-stewed eggplant, red peppers, tomatoes and other local vegetables. After all, you’ve ordered a classic Sicilian dish with one of the finest sweet-savoury mashups north of Morocco, and the rustic-chic Oinos restaurant crafts it with the subtle spices and flavours it deserves. The comfort-food menu also includes a sculptural tower of eggplant parmigiana, succulent, fat-lined slabs of meat in sage butter, and a beef filet covered with a purple sauce of local Nero d’Avola wine. A three-course dinner for two costs around 80 euros.

The bar called Boats, name notwithstanding, does not have sea views. It has something far rarer: a view over the ruins of the roughly 2,500-year-old Temple of Apollo. Lit by candles and decorated with impeccable retro-vintage finds, the cavernous, nautical-themed establishment also has multiple turntables, an impressive funk-soul vinyl collection and an inspired cocktail card with concoctions like The Flaming Zone.

10am: There’s something about Mary

The number of Madonnas per square yard in the Galleria Regionale di Palazzo Bellomo – dedicated mostly to medieval, Renaissance and Baroque art – must surely approach record status. There she is, alongside her child, towering over a church carried by angels, in a surreal painting. There she is in Gothic mode, resplendent in deep reds, blues and golds, on a time-fissured wooden board by the Master of the Polyptych of Santa Maria.

But, certainly, her most stunning rendition comes from the hand of Antonello da Messina. His 15th-century painting “Annunciation,” depicting Mary visited by an angel, is a masterwork of powerful colour, exquisite detail and beatific light. Admission, $9.

Noon: A few loaves and many fishes

Sicily’s horn of plenty spills out in a tide of colours, shapes and smells at Ortigia’s outdoor market. Walking down the lively, crowded corridor of storefronts, stalls and sidewalk tables, you get a vocabulary lesson and gastronomic tour all in one: purple-green carciofi (artichokes), orange zucche (pumpkins), brown mandorle (almonds), black barrette di cioccolato (chocolate bars) from Modica. But mostly you find freshly hooked and netted fish, including seppie (cuttlefish) and shiny green-black sgombro (mackerel). Breads, nuts, spices and cheeses round out the mix. Around the corner, a trinket market awaits anyone intent on taking home a Vespa-shaped magnet or Godfather T-shirt.

Practice your new vocabulary next door at Divino Mare, a simple and colourful seafood joint where many of those words are scrawled and re-scrawled every day on the chalkboard menu. Using the daily catches from their neighbours, the friendly staff serves up fresh carpaccios, ceviches, seafood pastas, fried critters, grilled fish and whole baked undersea creatures. And if orecchiette pasta with tender octopus chunks isn’t sufficiently filling, try the garganelli pasta with shrimp in a rich butter-truffle sauce. A two-course meal for two costs about $55.

3pm: The sinner and the saint

Caravaggio was on the run. Having escaped from prison in Malta, the bad-boy artist (and accused murderer) arrived in Syracuse in 1608 and scored a commission to paint The Burial of St. Lucia, which today hangs in the Chiesa di Santa Lucia alla Badia (free admission). Dominated by sombre blacks and browns, the canvas depicts the corpse of Syracuse’s patron saint (the only horizontal element) mourned by a priest in a blood-red scarf (the only splash of bright colour) and a crowd of onlookers. But the most mesmerizing component is the diffuse, shadowy emptiness surrounding them. Across the stately Piazza del Duomo stands the cathedral (admission $2), whose architecture and design elements form a survey of Syracuse’s history, from the ornately chiselled facade (Baroque) to the kaleidoscopic marble floor (Renaissance) to the soaring stone pillars integrated into the walls (remnants of a 480BC temple to Athena).

Il Piacere della Pelle is a leather-goods shop where all of the simple monochrome bags, backpacks, sandals and more are crafted on-site. The boutique is one of many small treasures hidden on Ortigia’s narrow streets, and an afternoon shopping stroll is also a journey of discovery that turns up hidden squares, unexpected passages and tons of Old World architecture. A haven of luxurious and colourful packaging, Ortigia Sicilia sells fragrant beauty products made with the island’s fruits and flora, such as resin-spice shaving cream and pomegranate soap. You can slip them into a handbag from Lumiere Design, where traditional Sicilian woven baskets are adorned with lace, fur, sequins, gold chains and other upscale accoutrements.

8pm: Room and board

Arne Jacobsen or the Eameses would have felt at home inside Room Cucina, a lofty and minimalist new hot spot that channels the spirit of midcentury modernism. They would likely enjoy the cooking, too, which reveals an eye for presentation and a nose for flavorful embellishments.

You might start with polpette of tiny neonato fish and mushy asparagus – literally rolled up into a crispy-fried ball of savoury flavours – before moving on to spaghetti in butter sauce that’s loaded with tiny tender clams and slivers of candied lemon. Among the options for the mains, the veal isn’t one of those thin, breaded, fried-up and dried-out disasters with the flavour similar to that of a carpet sample but rather a thick, juicy cut of meat surrounded by droplets of a sweet-sour balsamic reduction. Expect to pay around $100 for a three-course dinner for two.

You practically need a Campari detector to find Ortigia’s other top bars, which are hidden away. Outfitted with antique furniture and an upright piano, Cortile Verga surrounds a courtyard filled with white marble tables, offering both indoor and outdoor space to enjoy a mild India pale ale by Sicily’s Vittoria brewery ($8) or the expert Italian-Mexican mix of a Malinche cocktail.

Then slip into the candlelit, palm-planted courtyard of Barcollo, a chic and sultry lounge offering fruity drinks like the Ortigia Mule.

10am: Ancient sites (and sounds)

In the prolific years before he was killed by a tortoise that had been dropped by an eagle, celebrated Athenian playwright Aeschylus visited the ancient Greek theatre of Syracuse to stage Women of Etna. The play, performed there in 475 BC, has been mostly lost to time, but much of the semicircular stone theatre remains impressively intact and hosts performances to this day. Other marquee attractions in the Parco Archeologico della Neapolis are the eroded cliffs and otherworldly geological forms where the Greeks, Romans and others quarried stone. Particularly stunning is the Ear of Dionysus, a soaring jagged cavern on a cathedral scale that amplifies even the tiniest noises into eerie echoes. Admission, $11.

Your historical odyssey culminates in the Museo Archeologico Regionale Paolo Orsi. All of the favourite Greco-Roman deities, heroes and creatures are there, in ceramic or sculptural form. Hercules drives chariots and fights lions on black-glazed pottery. A grinning satyr sails on a bloated wineskin. The early Christian relics are no less impressive, notably the Sarcophagus of Adelphia, which was discovered in the nearby catacombs of St. Giovanni. Dating to the 4th century, the funerary masterwork is chiselled with 13 biblical scenes – including the temptation of Adam and Eve, and the wedding at Cana – in three-dimensional reliefs. Admission, $9.