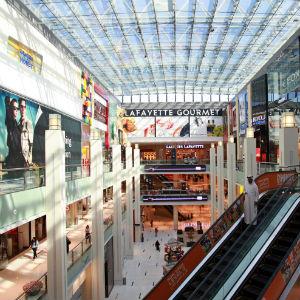 Four GCC countries – the UAE, Oman, Kuwait and Saudi Arabia – feature among the world’s top emerging markets for global retail expansion, according to a study released by consultancy A.T. Kearney.

“We are seeing GCC retailers grow exponentially,” he said.

“Some have reached their 100th store opening milestone in a third of the time compared to developed markets and some are experiencing growth rates three to four times faster than their mature peers-we call it hyper-speed evolution,” he said.

While Oman entered the index for the first time, Qatar doesn’t feature on it because the country’s population growth was below the required threshold, added Fabel.

Globally, Brazil topped the list for a second year in a row, followed by Chile, China, Uruguay and India.

The highest ranked countries within the MENA region are:

With a GRDI score of 60.6, the country ranked seven on the index, one position higher than last year. The move “reflects strong consumer confidence and increasing retail sales of over five per cent in 2011 [compared to 2010],” said the report.

Ranked right below the UAE at the eighth spot with a GRDI score of 58.9, Oman has been highlighted in the global study as a “small gem.”

The GCC state fell seven spots from last year to rank 12th on the index with a GDRI score of 56.6. One of the wealthiest countries in the region, Kuwait’s position dropped because of increasing market saturation, said Emanuele Savona, principal at A.T.Kearney.

“The country’s projected retail sales increase of $4 billion from 2011 to 2015 is indicative of the growing interest by new international brands,” the report added.

The region’s largest market, Saudi ranked 14th on the index with a GDRI score of 53.3. The Kingdom has very strong fundamentals of rising GDP, population growth and increased government spending, said the report.

Another first entrant in the index, Jordan had a GDRI score of 51.1, placing it 18th on the list. While retail is gaining strength in the country, Jordan’s status as a gateway to Iraq makes it even more attractive to retailers, said the report.

Lebanon’s ranking fell 10 spots from last year to 22nd position on the index this year, mainly because of political instability and the Syrian uprising taking place next door, said the report. But the country’s celebrity designers are helping it gain a reputation as a global fashion capital, A.T. Kearney added.

The North African country was positioned 27th on the index, with a GDRI score of 44.8. Morocco’s ranking also dropped from last year because of increased risk posed by political instability, the report said.

Last on the index at the 30th spot, Tunisia also fell 12 positions from last year because of unrest in the country.

“While the government still supports a favourable environment for foreign investment, international retailers are hesitant to enter this recovering market,” said the report.