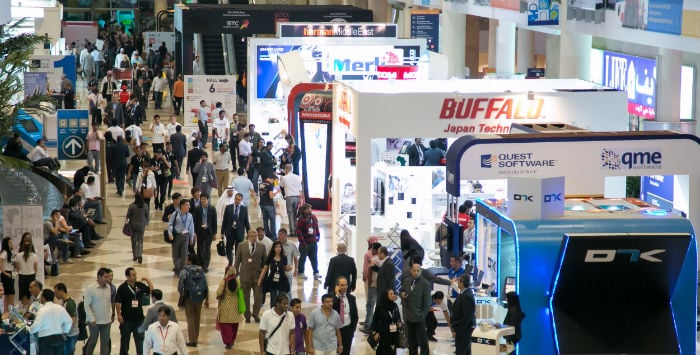 Cloud was probably the most popular jargon-term used by almost all the participants at Gitex this year. Companies in the region are no more just talking about it, but have already started implementing the technology, say experts.

Cyber crime was a popular topic at Gitex this year, especially because of the rising number of online attacks on prominent local companies in the Middle East such as Saudi Aramco and Qatar’s Ras Gas.

Symantec, Kaspersky and several other security system providers stressed the importance of recognising the threat and improving security infrastructure.

With smartphone penetration in the GCC reaching incredibly high rates, all the vendors in the market are eager to enter the sector.

Microsoft hosted one of the busiest stands this year, since the IT giant had prominent displays of its soon-to-be launched operating software, Windows 8. Dubai is one of the six cities in the world that will officially launch Windows 8 on October 26. The new operating system avoids the traditional Microsoft “start button”, and is designed for interface via keys, mouse and touch.

The UAE government had a particularly strong presence at Gitex this year, and we saw some interesting announcements from public entities.

The UAE’s Telecommunications Regulatory Authority (TRA) launched UAEpedia, an online encyclopedia about the UAE. Using an open-source model, the site will allow the general public to contribute and modify content about the country.

Start-ups in the MENA region grew eight fold since 2005, according to a report released by Dubai Internet City (DIC) during Gitex.

But speaking to Gulf Business, Prashanth K Gulati, an angel investor, revealed that funding for tech start-ups is very low in the region. Most investors in the region are reluctant to fund start-ups and smaller companies because of the high risks involved.

Social networking is growing faster in the Middle East and Africa than anywhere else in the world, largely due to the Arab Spring, said a new report released by eMarketer and the Starcom MediaVest Group. Some 70.2 per cent of the region’s internet users will use social media this year, the report estimated.

In terms of deals, Google Apps signed an agreement with the Ajman Free Zone Authority during Gitex to provide productivity and communications solutions to AFZA’s 5,000 customers.

One of the oft-heard words at the tech event was “innovation”. Every company stressed the importance of “constantly innovating” and claimed that it was the only way to beat competition.

And there’s certainly going to be a lot of competition going ahead; Intel estimates that by 2012, there will be 15 billion internet-related devices across the world.

Hip-hop singer 50 Cent added the star element to the show, when he launched his SMS Audio Headphones across the region in partnership with UAE-based Shift.

“This is a great venture, you can steal and download music but you can’t steal a headset,” he said.

“Walking through Gitex is like walking through the future. Dubai is the perfect springboard to launch SMS Audio, because the emirate is famous for its pursuit of high standards in everything it does,” he added.