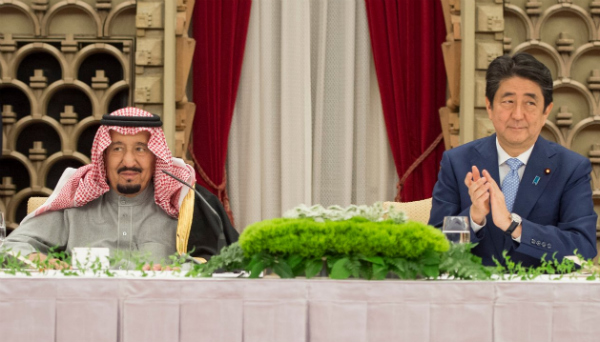 Abe made the request for support on the Aramco listing to the Saudi monarch, who responded by saying the kingdom would look into the request because he wants Japanese investors to buy Aramco shares, Japan’s deputy chief cabinet secretary Kotaro Nogami told reporters.

The two leaders met on Monday, the second day of the king’s visit to Japan, part of a month-long Asian tour.

Separately, the governments of Japan and Saudi Arabia said in a joint statement that Aramco and the Tokyo Stock Exchange (TSE) are considering setting up a joint group to study a Japan listing for the Saudi oil giant.

Saudi authorities plan to list up to 5 per cent of the world’s largest oil producer on the Saudi stock exchange in Riyadh, the Tadawul, and also one or more international markets. Besides Tokyo, markets in New York, London, Hong Kong, Singapore and Toronto, are vying for what could be the world’s largest IPO, potentially raising as much as $100bn.

While the Japanese government is keen to have Aramco shares trade in Tokyo, bankers and lawyers say the Tokyo market is unlikely to get the nod because of strong competition and due to Japanese investors being less receptive to energy companies than some other sectors such as technology. Yen volatility is another factor.

The Saudi monarch arrived in Japan on Sunday after a visit to Malaysia and Indonesia that included a holiday stay in Bali. Energy Minister Khalid al-Falih and Aramco executives were scheduled to travel with him to Japan, sources told Reuters earlier.

Saudi officials are keen to court Asian investors for the sale of the Aramco stake in 2018, and have solicited financial advice from banks with links to China.

The IPO is the centrepiece of the Saudi government’s ambitious plan, known as Vision 2030, to diversify the economy away from oil.

Japanese and Asian banks and companies are expected to play major roles in the kingdom’s plans to develop non-oil industries and expand its international investments.

Saudi Arabia is Japan’s biggest oil supplier and Japanese refineries and other oil importers bought about $2.2bn worth of Saudi oil in January.

The two countries on Monday also signed economic cooperation agreements in industry, energy and finance and on setting up a possible special economic zone in Saudi Arabia.

They also agreed to start a feasibility study on vehicle production in the Middle Eastern country. The Nikkei on Saturday reported that Toyota Motor Corp is looking into building a plant in Saudi Arabia.