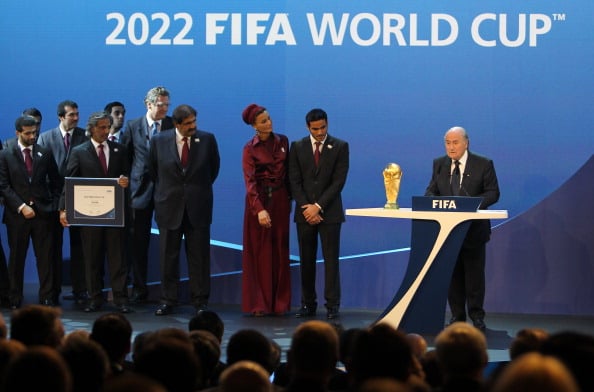 Qatar’s FIFA World Cup win has been in the limelight for many reasons since the tiny Gulf state won the right to host the tournament in 2022.

Below is a timeline of events from the date of Qatar’s win to the FIFA committee’s recent comments suggesting a change in date for the tournament.

January 7: FIFA president Sepp Blatter backs the idea of a winter tournament, after testing the heat for himself during a summer trip to the Middle East.

January 14: Bin Hammam, a member of FIFA’s executive committee, dismissed Blatter’s bid for a tournament shift while rejecting the idea of Qatar sharing the World Cup with other GCC countries like Bahrain and the UAE.

May 11: Rumours circulate that the Confederation of African Football (CAF) president Issa Hayatou and executive committee member Jacques Anouma were reportedly paid $1.5 million by Qatar in a bid to ‘buy’ votes.

May 23: Allegations arise that Qatar paid millions of dollars to the executive committee to buy votes in order to host the World Cup following a report by the British newspaper The Sunday Times. Qatar Football Association said that they “categorically deny” the allegations.

July 11: The whistleblower in FIFA 2022 corruption claims, Phaedra Almajid, a former international media officer for Qatar 2022, revealed that she had lied about the corruption claims as a revenge for losing her job. Almajid also signed an affidavit retracting her statement.

July 13: Hassan Al-Thawadi, the secretary-general of the Qatar 2022 Supreme Committee, dismissed bribery claims and reassured soccer fans of a memorable experience. He announced Qatar’s plans to construct air-conditioned stadiums and added that there would be no extreme restrictions on alcohol and dressing.

August 9: Football Association chairman Greg Dyke said a summer tournament is impossible following comments from his predecessor, David Bernstein, that any switch would be “fundamentally flawed”.

August 25: Blatter confirmed that the FIFA executive committee will convene for a vote on a potential time change since climate conditions in Qatar are not suitable for a summer tournament.