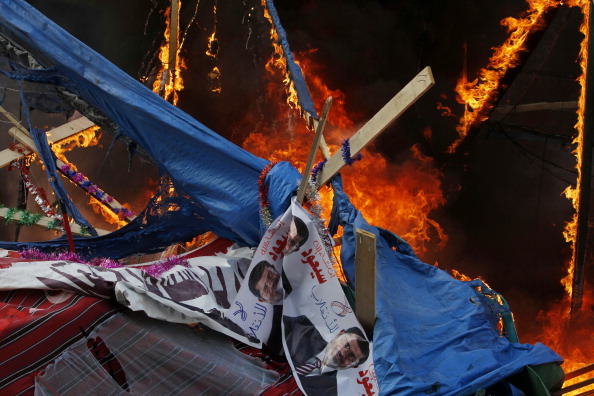 Here is a short timeline of events in Egypt since Islamist President Mohamed Mursi was toppled by the military after weeks of mass unrest against his rule:

July 3 – Egypt’s armed forces depose Mursi after huge street protests against his rule. Mursi is sequestered in a Republican Guard barracks after denouncing what he called a “military coup” that stripped him of power a year after he was freely elected.

July 8 – More than 50 people are killed when the army opens fire on Mursi supporters. Protesters say shooting started as they performed morning prayers outside the Cairo barracks where Mursi was believed to be held.

July 16 – An interim cabinet of 33 ministers, mostly technocrats and liberals, is sworn in, led by interim head of state Adli Mansour.

August 7 – Days of international mediation efforts collapse and the army-installed government repeats its threat to take action against supporters of Mursi.

August 14 – Egypt imposes a month-long state of emergency after 149 people are killed in a raid on Cairo protesters demanding Mursi’s reinstatement and in other clashes nationwide. State news agency says 1,403 have been wounded. Interim vice president Mohamed ElBaradei resigns, saying such bloodshed would benefit only extremists.