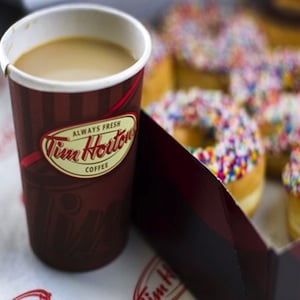 The Ontario-founded eatery has even made it into the Oxford English Dictionary with the term ‘double double’ – its proprietary slang for a coffee loaded with two shots of sugar and cream. The no-frills yet wildly successful brand holds a special place in the hearts of Canadians – but will the North Americans be able to replicate their magic formula in the Gulf?

After nearly half a century of feeding coffee and baked goods to North Americans across 3,871 outlets, Canada’s largest publicly traded food firm is launching 120 stores across the UAE, Oman, Qatar, Kuwait and Bahrain within the next five years.

“There’s a big brand loyalty, the Canadians have located us in Dubai already,” says Paul House, executive chairman of Tim Hortons, sipping a coffee in the firm’s inaugural Sheikh Zayed Road branch. “They don’t just call it Tim Hortons, they call it ‘my’ Tim Hortons,” he says with grin.

But, back at Motivate towers, when I goad my Canadian friends to elaborate on what gives Tim Hortons its je ne sais quoi, the normally garrulous lot are a loss for words. “It’s, erm, cosy it’s, um, I meet my friends there” said one usually verbose colleague and ardent Hortons ambassador, adding that her husband “nearly drove off the road” when he saw one of the firm’s new and sizeable billboards on the UAE roads.

The firm’s executive chairman is equally whimsical when I ask him what gives Hortons its pull. “It brings the community together, it’s where friends bring other friends. It’s comfortable, the coffee and the food are equally important. We are more of a restaurant than Starbucks,” he says.

On closer inspection, the price points are slightly lower than Starbucks and Tim Hortons provides a fuller range of food, from soups to sandwiches. And the fact that Tim Horton himself was a legendary Canadian ice hockey player who tragically died in a car crash in 1974 only adds more weight to the cafe’s patriotic clout.

House says Tim Hortons is targeting the Gulf for its first international expansion outside Canada and the US because of its growth opportunities and its exceptionally strong local partner, Apparel, which has already successfully brought brands such as Tommy Hilfiger and the Cold Stone Creamery to the region.

“For the next 24 months we are focused on this market, then we will start to look at more international markets,” says House. “Our expansion plans weren’t delayed by the recession. Sometimes in the recession people trade down, and a lot of our regulars come to Tim Hortons everyday, even in a downturn. People will cut out other things out of their budget to come here, so we are totally safeguarded in some ways. We’re targeting all age groups from 18 to 65 years – the kids and the grandparents, the Ferraris and the pick-up trucks.”

Indeed, Tim Hortons is in a good position to expand, with an enviable cash profile. The firm reported third-quarter revenues of $726.9 million this year compared to $670.5 million in 2010, an increase of 8.4 per cent, with sales to date this year topping $2 billion. That’s a lot of coffee and sandwiches – 62 and 76 per cent of the entire Canadian market to be precise.

House adds: “Our challenge is to educate our people about our brand, educate our staff to deliver our Canadian standards and build our supply chain. We are confident in our partner and the reception has been fantastic. We’re very excited about being in Dubai.” Not as excited as the Canadians in my office.