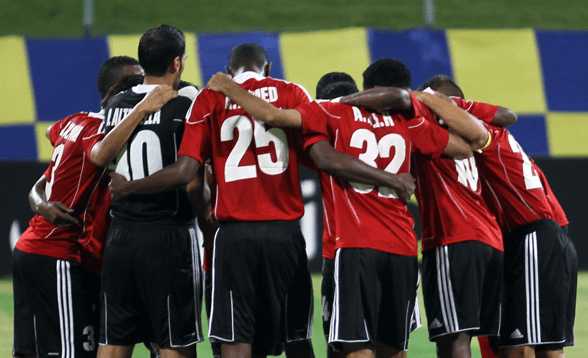 A total of five UAE football clubs are to merge in two separate decrees announced by the rulers of Dubai and Sharjah.

Under the plans, Dubai-based Al Shabab, Al Ahli and Dubai Club will be merged into one sports entity called Shabab Al Ahli Dubai Club, according to Dubai Media Office.

A supreme committee to oversee the merger has also been formed under the chairmanship of Khalifa Saeed Sulaiman.

In January, the chairman and board of Al Ahli was dismissed by Sheikh Mohammed and the club was placed under an interim committee led by Sulaiman.

UAE state news agency WAM reported that the merger aimed to improve the level of sport in the emirate and consolidate efforts “to serve all sports and group and individual games”.

Sharjah Sports Council will manage the new entity during the transition until a board of directors is appointed.

It was unclear what the mergers would mean for each team’s players and ground staff. Dubai Media Office said the assets and properties of the three Dubai clubs would be managed under an investment company chaired by Hesham Abdulla Al Qassim.

Dubai’s Al Ahli was formed through the merger of the Al Wahda and Al Shabab clubs in 1970 before Al Najah Club also merged into it four years later. The club is the most successful of the three Dubai clubs and has won the UAE championship seven times.

Vice President and Prime Minister of the UAE and Ruler of Dubai, His Highness Sheikh Mohammed bin Rashid Al Maktoum, was quoted as saying the new team, which is headquartered at Dubai Sports and Cultural Club, would compete for continental and global trophies.

Dubai Media Office said the UAE Football Association will hold an urgent meeting to discuss the merger, which is reported to have been motivated by financial pressures affecting the three teams.