Thousands Of Bahrainis Protest Before Formula One - Gulf Business 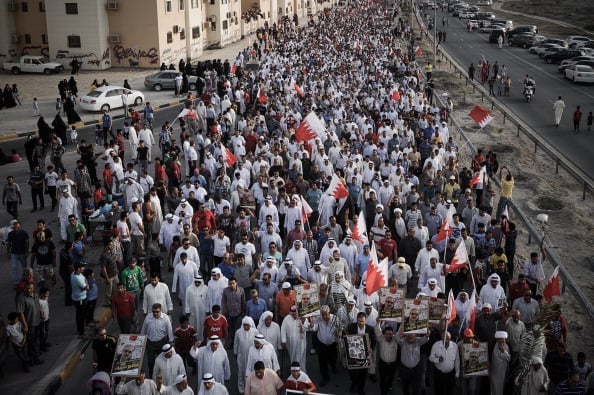 Thousands of Bahrainis staged a peaceful march on Friday in the first of a series of protests the Shi’ite-led opposition is planning to hold before next week’s Formula One Grand Prix race.

“You have no legitimacy,” they chanted.

The Gulf Arab state, where the U.S. Navy’s Fifth Fleet is based, has been hit by unrest since pro-democracy protests broke out in early 2011, putting it in the frontline of the region-wide power struggle between Shi’ite Muslim Iran and Sunni Arab states such as Saudi Arabia.

Waving the red-and-white Bahraini flag, the demonstrators marched from one main roundabout to another in the village of al-Aali, some 15 km (nine miles) outside the capital Manama.

“The Formula One is used by the regime to advertise that there is nothing wrong in Bahrain,” said Abdelwahid al-Nadhkhadha, a 53-year-old company employee. “We are showing the world that we are people with demands.”

Watched by millions around the world, the Grand Prix is the biggest sporting event hosted by the U.S.-allied country whose government is hoping for a big turnout despite continuing violent unrest.

The race at the Sakhir desert circuit was canceled in 2011 when protests were crushed and at least 35 people died.

Demonstrations have taken place almost daily in the island kingdom since the end of martial law in June 2011, often resulting in confrontations as youths throw stones or petrol bombs and police fire birdshot pellets and teargas.

The opposition and the government resumed reconciliation talks in February for the first time since July 2011 but little progress has been reported.

The Shi’ite majority complains of discrimination while their loyalty in turn has been questioned by members of Bahrain’s Sunni ruling family, bound by historical and marriage ties to that of Riyadh.

The government denies discrimination and says it has implemented reforms recommended by an international inquiry that investigated police handling of the 2011 protests.

“We are asking for our human rights,” one protester shouted over a loudspeaker on the main road as the demonstrators marched forward. Some wore banners that said “Ready to die for Bahrain”.

A woman draped in a black cloak, typical of garb worn by Shi’ite women, said she felt it was her duty to march.

“As long as there are oppression, arrests and killings, there should not be a Formula One,” the woman, who wished to be identified only as Um Hussein, said.

Earlier this week, Human Rights Watch said police had detained 20 opposition activists in towns near the Formula One circuit. Bahrain denied the report and said four people had been detained on suspicion being linked to a recent firebomb attack on the Foreign Ministry building.

Formula One chief Bernie Ecclestone said last week he had no concerns about the race becoming a target for anti-government protesters.

An international inquiry commission, invited by Bahrain’s government, said in a report in November 2011 that 35 people had died during the uprising. The dead were mainly protesters but included five security personnel and seven foreigners. The report said five people had died from torture.

The opposition puts the death toll at more than 80.