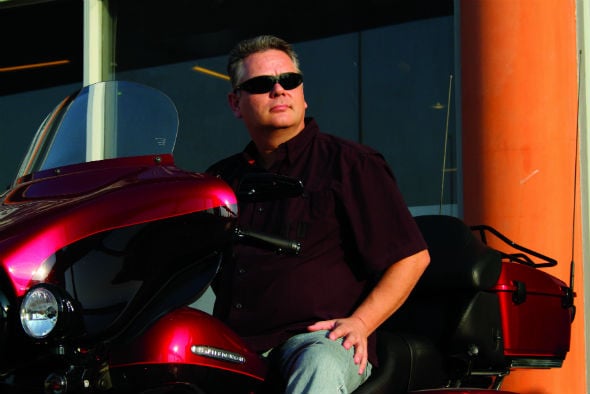 When a two-wheel motorcycle with limited storage space, just two seats and lacking in any obvious safety technology costs as much as a mid-market four door sedan, how do you convince a buyer to spend his hard-earned money on the former?

“I’d put him on the bike and let him have a ride, and then watch as his smile stays there for two weeks,” says Steve Beattie, general manager of Harley Davidson in the UAE.

It was a technique I visualised working as I met Beattie at the Dubai dealership on Sheikh Zayed Road, my mouth open in awe at the plethora, mix and desirability of the bikes on show.

On more than one occasion Beattie tells me, customers have walked in, bought a Harley and only then registered that they did not have a bike licence. Being in the presence of so many of these artworks of motoring machinery is intoxicating.

“Most people don’t use a bike for transport, they use it for fun. You can spend Dhs180,000 on a Harley – that’s Dhs180,000 on a pastime. It’s absolutely an emotional decision buying a Harley Davidson; it’s not a logical one.”

On that reasoning, there are many emotional people in the UAE. The Harley Owners Group Dubai chapter has around 400 members with a mix of over 70 nationalities.

“There are Emiratis, expat Arabs, Americans, Europeans and we’re seeing a lot more Indian and Asian riders come on board,” says Beattie.

Such is the level of brand awareness and demand for the bikes in the UAE, that Harley Davidson recently opened a new dealership in Abu Dhabi, as part of an aggressive growth plan for the emirates.

“We’ve just opened one of the biggest dealerships in the world in Abu Dhabi,” Beattie says. “It has over 700 sq metres of showroom space and we’ve developed a business class lounge for customers to hang out.

“In November we’re opening a new space in Fujairah which will be a destination facility, the idea being our customers can ride there through the nice roads in the Hajar mountains.”

Beattie also revealed plans to completely renovate the Dubai showroom (one of Harley Davidson’s top performing dealerships outside of the U.S.) into a world-class facility and to roll out its boutique concept currently found in Dubai Mall, with likely destinations in Sharjah, Al Ain and Abu Dhabi’s Marina Mall.

“We wouldn’t put those sorts of investments in if the business wasn’t right and if we didn’t see more growth,” he explains.

“I have a vision of how Harley Davidson is going to be in the UAE in the future; the plan is that you will never be more than a two hour ride from a dealer.”

That will be music to the ears of the hundreds of local Harley owners, many of whom Beattie expects to attend the MENA HOG Rally in December – the region’s largest Harley Davidson event filled with family entertainment, a ‘thunder parade’ and an as yet unannounced international music act.

One thousand bike owners all coming together, united through their love of Harley Davidson. As Beattie tells me, to a Harley owner nothing beats the roar of the engine or the aspirational image that comes with owning the pinnacle of motorbikes.

“There is seriously nothing better than pulling up to a set of traffic lights, looking round and seeing two kids with their hands pressed against the window, their tongues hanging out and mum in the front taking pictures – all because it’s a Harley Davidson.”