The Rise Of Triathlons | UAE News 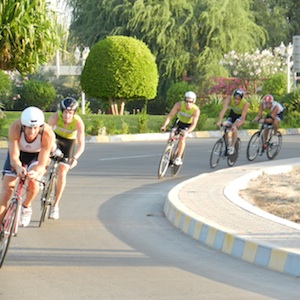 The desert that separates Abu Dhabi and Dubai seems a no-man’s land. And at night the area, in the hours after midnight, is deserted, save for a pack of cyclists bearing down upon the pavement.

“It’s practically in the middle of nowhere,” says Ali Tabbal, one of the cyclists. “Sometimes we’ll find some gazelles or desert foxes running around.”

There’s a reason why Tabbal has what could be considered a peculiar intimacy with the UAE’s backroads. He’s part of a growing group of executives who moonlight as triathloners, somewhat literally. Hectic work schedules and family life – not to mention the region’s soaring temperatures – mean the athletes must train overnight.

“It’s a really good place for cycling,” says Tabbal, describing the 55-kilometre loop that’s become a favourite training ground for cyclists, save for the man-sized pothole in the middle of the road about 15 kilometres before the end.

Tabbal, who is the former deputy CFO at Saudi Prince al Waleed bin Talal’s Kingdom Holding Company, is part of a growing number of Gulf executives who have made training for the endurance sport a mainstay of their workout schedules.

“It’s an expanding fraternity, especially among high-level executives,” says Jason Metters, an endurance athlete and coach who trains members of the royal families in the region in addition to executives such as Tabbal. One easy way to measure that growth, he adds, is by the attendance figures of a yearly training session he organises with Craig Alexander, a three-time Ironman Triathlon champion. In the first camp in 2009, he had about 20 people attend. Last year, it more than tripled to about 75.

In many ways, both he and Metters say, such endurance training has become the “new golf,” the latest way high-powered chief executives blow off steam from hectic workdays.

Triathlons, in particular, appeal to the men because they say the attributes needed to succeed are similar to those required to navigate the business world: fast decision-making, tenacity and discipline. And unlike the business world during the painful years that Dubai was unwinding from a deep recession, the work put into triathlon provided a much quicker payoff.

Tabbal is part of a team that includes Legatum chief executive Mark Stoleson, as well as other top business leaders in Dubai who all work out together. Unlike golf, which caters to a certain group of people, Stoleson says he enjoys the more diverse group triathlons bring together, “executives and housewives” who are all humbled together by this sport.

“Triathlons are a practical application of the metaphor that life is a marathon, not a sprint,” he added.

As a child, Stoleson had watched Ironman events on television and said he wondered if he, too, could compete on that level. “Like many office-dwellers, I had let my health deteriorate,” he said. Triathlons provided the incentive to get back into physical shape.

Tabbal concurs. Five years ago, he had the fast-paced life of a typical Dubai executive: high-level meetings negotiating deals worth millions of dollars and travelling the world as the former chief financial officer of Dubai Holding. The years following the collapse of the global economy in 2008 were particularly stressful.

Despite all of the activity, he felt sluggish. “When I was playing with my kids, I couldn’t keep up,” he says.

Working out in the gym didn’t click so he bought a bike. Then he heard about triathlons. During his first event, he finished in 11 hours and 52 minutes. “I suffered like I’ve never suffered before,” he says. “I came in second-to-last.”

At the Abu Dhabi Triathlon last year, the suffering continued. (He emerged with a few cracked ribs and first-degree burns on his feet.) But his timing, he’s happy to report, is improving; he finished his latest race in 10 hours and 42 minutes.