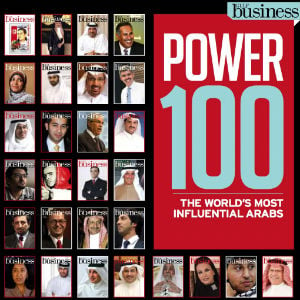 Gulf Business is proud to unveil its first-ever list of the world’s most powerful Arabs. And what a year to launch the rankings. The region and the world have witnessed a previously unthinkable level of change. In 2011, much of the Arab world awoke from decades of oppressed slumber to find a united voice – propelled and enabled by the rise of social media.

This regional struggle was set against an extraordinary backdrop of global economic uncertainty and decline following the ravages of the 2008 recession, which bid its welcome like a tornado into the Gulf in 2009.

There were many local corporate casualties, which prompted a time of regional reflection. The Gulf revisited its ambitious and erstwhile gung-ho plans; the hatches came down, companies faced restructuring, and the Gulf’s corporate landscape evolved into an altogether more sober and measured place to do business.

Today’s power players are those who are cash-rich; those who possess solid business and expansion plans; those whose can walk the proverbial talk amid an increasingly opaque global economic outlook.

2011 was a year of two gears. The yawning chasm between the anaemic, strife-ridden West and the growing emerging markets is becoming ever more contrasted. The Middle East possesses a large and growing population, unsaturated markets, and, in many cases, dazzling plans for the future – evidenced by its enthusiastic billion-dollar infrastructure and education spending.

Qatar and Saudi Arabia, in particular, are among the leading light countries of terms of infrastructure, power base, and riches. This shift is reflected in our list.

How we did it

We assembled a team of experts from within Motivate Publishing’s broad business division – including the Gulf Business team itself, which has decades of experience working with and reporting on the Gulf corporate markets.

We looked at the events of 2011, in particular, and judged each individual case on power merit. We weighted our criteria across influence on financial capital and human capital, as well as expansion plans for 2012 and personal fame levels.

In general, we have excluded politicians and royalty, unless the contenders have a strong leaning towards business activity.

The Gulf Business Power 100 is intended to be an inspirational representation of some of the visionaries who are pushing forward the region in every sense. Congratulations to the power players who made the list.

1. Mohammed Bouazizi
The man who changed the world

He never meant to be the world’s most powerful Arab. All he wanted to do was earn a living. The 26-year-old Mohammed Bouazizi immolated himself outside a local municipality building in protest at an attack from a policewoman who confiscated his vegetable cart, where he earned a $7 a day living. And, with that salary, he was one of the lucky ones.

The Tunisian’s tragic act chimed with the hoards of disenchanted, frustrated and unemployed youths across the Arab world – 100 million and counting – and unleashed the deafening voice of the people.

Tunisian president Zine el Abidine Ben Ali was unable to blunt the public protests and only lasted in power for 10 days after Bouazizi’s death. Less than a month later, the calls came for the removal of Egyptian president Hosni Mubarak. The rest is history in the making as the region continues to shift under the throes of bloody uprising, from Syria to Bahrain.

Thanks to the brave act of a previously anonymous Tunisian market seller, those who had lived without hope in a world of despots rose together and changed the region, often via social media, such as Facebook and Twitter – but, equally, through brave and defiant acts of guerrilla street fighting and protests.

That Bouazizi leads the first Gulf Business Power 100 list despite his untimely death is testament to his ensuing ripples of power and influence; the full scale of which is, as yet, unknowable.

Under the umbrella of Kingdom Holding, Prince Alwaleed has garnered increasingly shrewd and famous investments. When he first set up his company in 1979, the Prince said he was “going to make his mark in business.” That, he did. Today the Prince owns stakes in Citibank, Movenpick Hotels, Walt Disney, Apple Inc, News Corp and PepsiCo, among others.

2011, like all years, was a busy one for Prince Alwaleed. He snapped up a stake in Twitter for a cool $300 million and also set the wheels in motion for his new Arab TV channel, Alarab – which he says will tread the moderate ground between a “government channel and a channel of the people”.

As if that wasn’t enough, the tireless Prince says he will begin work on Kingdom Tower this year, the 3,280ft structure is set to be the tallest in the world.

Prince Alwaleed is a natural born businessman who is more than comfortable counting his coins, but the chairman says he is happiest when masterminding global philanthropic initiatives at his not-for-profit organisation The Alwaleed Bin Talal Foundation – the charity, which he runs with his wife Princess Ameerah, touches numerous global lives with health, education and emergency assistance initiatives.

Sheikh Ahmed bin Saeed Al Maktoum has been the chairman of Emirates since its formation in 1985 and remains at the helm of its ambitious expansion plan. The airline now flies to over 100 destinations across six continents, with a fleet of over 130 wide-bodied aircraft and a $58 billion order for 170 more aircraft. The sheer scale of the airline’s expansion has shocked the world, not least the West’s grumbling air carriers, who are losing market share to Emirates and other Gulf airlines.

Sheikh Ahmed is also the recently appointed chairman of two of Dubai’s largest government vehicles: the region’s largest bank by assets, Emirates NBD, and Dubai World, the government holding group. His new appointments suggest a growing stature within the UAE stage – Sheikh Ahmed appears to have become ‘the man that can’ amid a difficult global economic climate.

He is the uncle of the current ruler of Dubai, Sheikh Mohammed bin Rashid Al Maktoum, Sheikh Ahmed is also the deputy chairman of the Dubai Executive Council, as well as the chairman of Noor Bank and flydubai.

In the last few years, Qatar has become increasingly boisterous, both in terms of its investments and speaking out on the world stage. Most recently, the Qatar prime minister (PM) condemned Syrian killings and said Arab troops should be sent it in – the first Arab country to publicly speak out on the matter.

However, the main reason that Sheikh Hamad ranks so high is due to his business interests and the considerable pile of wealth he resides over as chairman of the Qatar Investment Authority (QIA). The sovereign wealth investment vehicle and its subsidiaries have major stakes in some of the world’s top companies, including ArcelorMittal, Volkswagen, the Harrods Group and Miramax Films. The QIA also wholly controls the Qatari Diar Real Estate Investment Company.

The Qatari economy has catapulted in recent years. Current GDP is estimated at some $173 billon, up from $8 billion as recently as 1995. Forecasts put the country’s growth at 10 per cent per annum at least for the next five years.

This growth is due in part to the rising energy prices and higher exports of liquefied natural gas – Qatar has around one third of the world’s total gas reserves within its territory. Some $130 billion is earmarked for investment over the next five years, of which $65 billion will be devoted to energy-related projects.

Tawakul Karman, a Yemeni journalist and activist, is one of three women awarded the 2011 Nobel Peace Prize. The 32-year-old is the first Arab woman to win the prize and the youngest winner to date.

Karman heads the group ‘Women Journalists Without Chains’, which she co-founded in 2005. She gained prominence in her country after 2005 in her roles as a Yemeni journalist and an advocate for a mobile phone news service denied a license in 2007, after which she led protests for press freedom.

Karman redirected the Yemini protests to support the “Jasmine Revolution,” as she calls the Arab Spring, after the Tunisian people overthrew the government of Zine El Abidine Ben Ali. She has been a vocal opponent
who has called for the end of President Ali Abdullah Saleh’s regime.

The Nobel jury said Karman’s efforts were to be commended, “in the most trying circumstances, both before and during the Arab Spring… a leading part in the struggle for women’s rights and for democracy and peace in Yemen.”

As secretary general of the Qatar 2022 Supreme Committee that will be organising the FIFA World Cup, Al Thawadi has a powerful role to play. This is the first time that a country from the Middle East will be hosting the event and Al Thawadi is the face – and brains – behind Qatar 2022.

About 800,000 foreign fans are expected to visit Qatar during the World Cup.

A former player at Qatar Club’s Youth Team, Al Thawadi was earlier the CEO of the Qatar 2022 Bid Committee. Currently, he also serves as the director of the legal department at the government owned bodies – Qatar Investment Authority (QIA) and Qatar Holdings. He is also the legal council of the Al-Sadd Sports Club and sits on the board of Hassad Food Company.

Al Falih has worked his way up the ranks to the top seat at Saudi Aramco since joining in 1979.

A powerbroker at heart, the Saudi national usually secured positions that allowed him to negotiate between two goliath entities.

For instance, in July 1999, he became president of Petron Corporation, a joint venture between Saudi Aramco and the Philippine National Oil Company. Al Falih took charge in January 2009 from Abdullah Juma’ah, at a time of great significance in the industry due to the fluctuating price of oil.

He maintains, unsurprisingly, that “world will continue to rely on traditional fossil fuels for most of its energy needs for the coming decades”.

As the boss of investment firm PIMCO, one of the world’s largest bond investors, El Erian currently has around $1.3 trillion in assets under his control.

In his capacity as CEO, El-Erian is responsible for setting the strategic direction of the firm and leading its operations globally. He re-joined PIMCO at the end of 2007 after serving for two years as president and CEO of Harvard Management Company, the entity that manages Harvard’s endowment and related accounts.

El-Erian has published widely on international economic and finance topics. His columns have appeared in Bloomberg, The Economist, Financial Times and Newsweek. His book, When Markets Collide, was a bestseller, and named one of the best business books of all time by The Independent. He was named on the Foreign Policy list of Top 100 Global Thinkers for 2009.

The chairman, who has been instrumental in shaping the region’s real estate landscape, is also thought to be a trusted advisor to emirate’s Ruler, Sheikh Mohammed.

Alabbar is now rolling up his sleeves to launch an affordable housing scheme this year. The chairman says Dubai – to start with – still has room for properties at a price point of around Dhs500,000.

Alabbar is so confident of Emaar’s future that he recently signed off a $1 billion loan, secured by Dubai Mall, the largest shopping centre in the Middle East. Emaar reported a net operating profit of $340 million in the first nine months of 2011, and the company says it is close to handing over projects in “Saudi Arabia and other global markets shortly”.

The UAE is on track to become the first Arab country to produce nuclear power. The first stage of Abu Dhabi’s $40 billion project is set to be complete by 2017.

As the country’s permanent representative to the International Atomic Energy Agency (IAEA), Hamad Al Ka’abi has been personally involved in all of the safety milestones for the nuclear energy assessment and helped to draft peace policy agreements. As Iran continues to stoke mistrust with its under-the-radar nuclear activities, engineer Al Ka’abi plays a powerful role in telling the story of the UAE’s ambitious nuclear plans to the rest of the world.

The UAE’s transparent model will represent a blueprint for fledgling nuclear countries, Saudi Arabia and Jordan.