The Internet of Things: How it can change cities in the UAE - Gulf Business 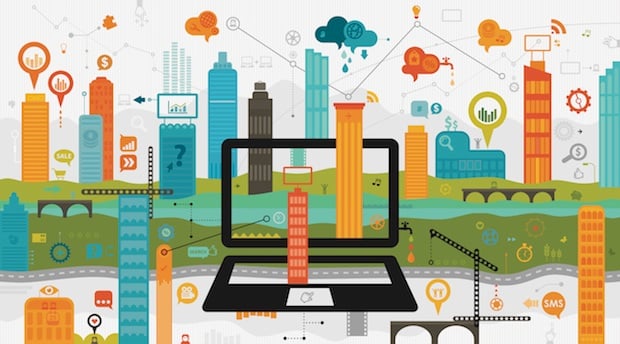 Finding a parking spot can be nothing short of an ordeal, especially in the UAE.

If you’re a car owner you will know the struggle all too well, and more often than not you’re likely to burn through a lot of fuel – not to mention time and energy – driving around in cramped lanes inside shopping malls, searching for that one elusive slot.

In some cases, you may find yourself driving from crowded mall to crowded mall, thwarted at every turn – a gruelling experience indeed.

The last few years, however, have seen some respite, with the widespread introduction of lights above parking bays. These lights turn green when the parking bay in question has free spaces, and red when it doesn’t. Not only do these lights indicate whether the bay is free, but also exactly how many parking spaces are currently unoccupied within the bay.

Of course, you have to wait to reach the mall itself in order to avail this convenience, but imagine if you could see this kind of information on your phone before arrive at the car park. With the advent of smart cities and the Internet of Things, this is possible.

Once simply a buzzword, the Internet of Things now represents the next great leap in unfettered human communication. With everything and everyone essentially connected to each other, there are no limits to the flow of information and what is possible – for the betterment of all.

A good example of this ideal scenario is the town of Milton Keynes. As one of the fastest growing towns in the UK, Milton Keynes has to support its expansion within infrastructural constraints, while meeting stretching expenditure and carbon reduction targets. One of their logistical problems lies with parking spaces, and this is something that the Milton Keynes Council decided to take action on.

The city has around 25,000 parking spaces, and the Council forecasts that it might need another 12,000 by the year 2020. However, it was also known that thousands of spaces were empty at any given time and in some cases, people did not know where to find them.

If the council could get people to those empty spaces, they’d significantly cut down on the amount of fuel consumed, the emissions created and the frustrations caused.

Identifying those free spaces and sending information to roadside displays and smartphone apps to guide vehicles towards available parking would maximise the use of existing infrastructure.

With this in mind, the council initiated a pilot programme at one of their car parks at the Milton Keynes railway station. An app would show the availability of around 300 bays, so people would know beforehand whether they’d be able to park. Detecting the arrival and departure of a vehicle, pre-installed sensors would send information wirelessly to solar-powered repeaters mounted on lampposts.

These aggregate the data and transmit it over the internet to the Milton Keynes Data Hub. Once processed, the resulting analysis is made available on the Milton Keynes Council public information dashboard, as well as a browser that displays a bay status as red (occupied) or green (free), and an overlay to Google Maps.

The plan was a success. Not only did it prove that the idea could work, but the council could also see how long people tended to spend in a space, and change their maximum waiting times. In the future it could even help them spot people who don’t pay for their parking.

Aviation presents another promising example. The aviation industry has been undergoing significant disruption in recent years and is poised for even more changes in the near future. Competition between airlines, coupled with the increasing demands of customers, is revolutionising the industry – and what we see today is just the start.

As an industry that is heavily dependent on delivering a seamless customer experience and positive feedback, technology is a central pillar behind the success of any modern airline. Harnessing the power of the Internet of Things, airlines will have the ability to collect data, turn it into insight and deliver a predictive service to customers, thus ushering in a new era of customer experience.

Today’s customers are demanding. They expect rich interactions and consistent experience with the companies they choose to shop with, no matter how or when they choose to get in touch. Through every contact point, customers expect the airline to know them, their history and preferences. Whether an airline wants to provide customers with additional services, or analyse relevant data to find out what passengers want, new tools and apps – with the Internet of Things playing a central role – will pave the way.

This is just the tip of the iceberg, with the Internet of Things slated to have a transformative impact on everything from retail to finance to energy. In an IoT ecosystem, everything will be connected to everything else, seamlessly delivering solutions and services. With the development and large-scale introduction of IoT technology, service providers will see a tangible change in how they operate on a day-to-day basis and how they respond to their customers. They will no longer be able to content themselves with a ‘business as usual’ mind-set.

Governments, driven by smart city initiatives, will also play an important part in the development of this ecosystem, as they move to automate services
for citizens and improve the standard of living.

In a similar way to how the Silk Route dramatically changed trade and cultural interaction, the Internet of Things is poised to become the next dimension for the exchange of ideas, transactions and services – emerging as a global information interchange.