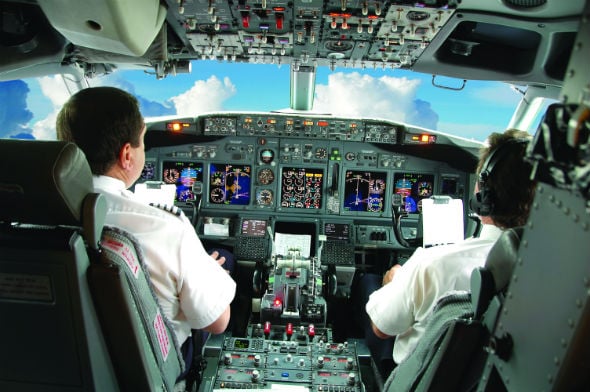 Analysts take differing views on the extent of the pilot shortage facing global aviation today. Boeing believes the Middle East region will require 40,000 new pilots and an additional 53,100 technicians in the period 2013 to 2032 to keep abreast of the demand for new skilled personnel in the industry.

“As global economies expand and airlines take delivery of tens of thousands of new commercial jetliners over the next 20 years, the demand for personnel to fly and maintain those airplanes will be unprecedented,” Boeing’s Current Market Outlook 2013 to 2032 says.

“The aviation industry will need to supply approximately one million new commercial airline pilots and maintenance technicians between now and 2032 to support this tremendous growth.”

Some commentators say that pilot provision is simply a matter of supply and demand, and that the airlines with the most attractive remuneration packages will benefit most. Others believe that the pilot career is losing its appeal, and that in the next decade or so a debilitating shortage will manifest itself.

The leading pilot training institution in the region is Emirates Aviation College (EAC) in Dubai, which trains hundreds of pilots a year. Today, the Garhoud centre houses 13 training bays and is one of the largest pilot-training facilities in the world. Emirates is understood to require around 1,800 new pilots a year to meet its ever-growing requirements for flight- deck personnel. A joint-venture between Emirates and Canada’s CAE is known as Emirates-CAE Flight Training (ECFT).

Emirates and CAE opened a pilot training facility at Dubai Silicon Oasis (DSO) in May, the second training centre owned and operated by ECFT, after Emirates Aviation College in Garhoud, bringing their joint investment in the region to over $260 million.

Other facilities in the region include the Royal Jordanian Aviation Academy, based at Marka Airport in Amman, which trains many Middle East students and has an output of around 130 pilots a year, which it is looking to increase to 200 by next year. In addition, it has plans to open a new training school in Erbil, Kurdistan, after winning further contracts in Iraq.

Although the global simulator market is understood to contain a total of 10 main players, CAE’s main rivals in the Middle East are thought to be the US’ Flight Safety International and Thales of France, acquired by L-3 Link UK in 2011. News reports said CAE had won several orders from Etihad in the summer for up to 14 Boeing and Airbus simulators.

As Emirates takes delivery of around three Boeing 777-300ERs a month, and other regional and Asia-Pacific airlines continue to grow, the pressure will be on to ensure that sufficient pilots are available to man newly delivered aircraft. Expect the region’s airlines to beef up the attractiveness of working for them, to ensure that the necessary manpower will be available, especially from the US and Europe.