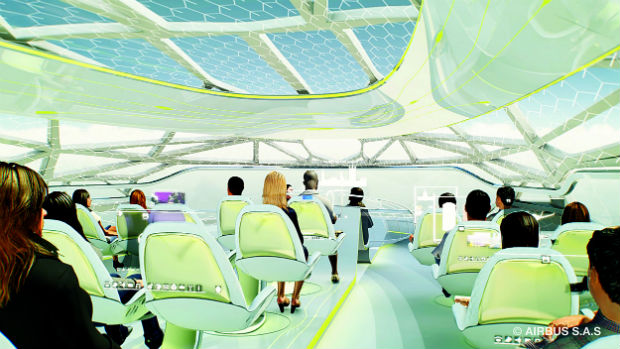 What is it about aviation that so captures the imagination? Since the Wright brothers first made the impossible dream of locomotion by flight a reality, the industry has ceaselessly modernised and reinvented itself.

Today’s A380s and Dreamliners are capable of carrying commercial loads and covering distances scarcely imaginable only two decades ago. The experience of flying in the 1980s and 1990s, as anyone who did so will attest, was incomparable with the experience of today. Levels of luxury, innovation and service have undergone radical step-changes, both onboard and in airports.

Put simply, the aviation industry has the means and the appetite to embrace the future, particularly in the Arabian Gulf.

The question is, what, in 2013, does that future look like? Awe-inspiring, is the short answer, with an accent on sustainability and profitability.

Earlier this year, after consultation with the industry’s brightest and bestminds, aircraft manufacturing giant Airbus published the Smarter Skies Vision 2050 document. Intended to give the aviation industry a steer on what to expect over the next 40 decades, it makes for incredible reading.

It says: “Speedier air travel may not suit everyone. A lot of people simply love the experience of being above the clouds and away from it all.

“So perhaps the next generation of cruise ships will be in the sky, not the sea, with packages to suit everyone – complete with swimming pools, spas and even golf courses.”

“And perhaps passengers won’t have to pay for tickets, with the operators making their money from casino revenues, restaurants and other attractions.”

Does that sound too fanciful? It is hard to imagine fairways at 30,000 feet. But certainly, the idea of spas and restaurants in the sky has been an industry goal for some time. In the last two years, for example, carriers such as Etihad, Emirates and Qatar Airways have all introduced onboard chefs at the front end of aircraft, to prepare meals for premium passengers.

What is to say, as aircraft become ever larger, restaurants could not become a reality, too?

The report continues: “Hundreds of flights already take place on popular long distance routes, like from Europe to the US, Asia or Australia, and there will be a lot more by 2050.

“So, instead of operating dozens of separate flights, perhaps airlines could have giant aircraft carriers. Smaller aircraft could dock on them for most of the journey − perhaps using vertical take-off and landing techniques − then be deployed on more localised shuttle services at either end of the trip.”

“The size of these new-generation aircraft carriers might even open up new possibilities for the type of energy that could be used to power them.”

It is worth remembering, perhaps, when reading these predictions for the future, that it was not so long ago the idea of intercontinental air travel being available to most of the planet would have seemed a very remote possibility. Docking stations, in the form of airborne, aircraft carriers, might not then be as strange as they sound.

Flight paths are also coming under considerable scrutiny from airline bosses keen to cut carbon emissions and benefit from the savings using less fuel would entail. In the last five years, considerable research has been undertaken, not least by Gulf carriers, to shorten routes making flights more direct by finding ways to cut through bureaucracy pertaining to international aerospace boundaries.

Currently, international flights more often than not operate a route characterised by zig-zags as carriers are forced to respect the jurisdictions of ground-based air navigation service providers and airspace laws. It is not an efficient way of flying.

In the coming years, however, experiments will continue into not only flying more directly, but optimising fuel burn during flights. Much, it turns out, can be learned from nature.

Airbus says: “What if the skies were stitched into one seamless blanket? Aircraft could navigate more directly and thus more quickly, efficiently and safely from Point A to Point B through optimal gate-to-gate flight paths or express flyways. Huge efficiencies would come from flying less track miles through optimal “gate-to-gate” flight paths.”

Carriers, too, it says, could cooperate to ensure their flights are operated in ‘flocks’ – the way geese fly, for example – to reduce drag.

“Flights to and from similar geographic areas could rendezvous in mid-air before continuing their journey. Trans-Atlantic departures from San Francisco, Los Angeles and Las Vegas to the UK might meet over Utah and fly to England in formation. This would also offer the potential to streamline air traffic control workload by treating each flock as a single entity while in cruise.

“It won’t take the wing-tip precision of the Red Arrows or Blue Angels,either. A safe flight separation of about 20 wingspans – far less than the four nautical miles that separates civil aircraft today but still over one nautical mile – is sufficient to reap the benefits.

“In a V formation of 25 birds, each can achieve a reduction of induced drag by up to 65 per cent and increase their range by seven per cent. While efficiencies for commercial aircraft are not as great, they remain significant.”

It all sounds incredible, as are plans to propel aircraft to speeds sufficient for take off by using giant ground-based catapults at airports, thereby saving on fuel. But perhaps the most jaw-dropping innovations will be seen onboard.

Already, plans have been drawn up by Airbus and others to load passengers, preflight, into cabins, which can then be lifted and placed on aircraft, like pods. Seats, too, are being designed by several competing firms that will capture a passenger’s bodyheat and use it to power inflight entertainment systems.

Replacing traditional opaque aircraft walls with transparent materials that are just as strong is also an option that is being considered (not good news for sufferers of vertigo).

But the real dream for the industry – once achieved but lost with the demise of Concorde in 2003 – is supersonic flight. By 2050, all indications are
the sound barrier will no longer be beyond the reach of the commercial aviation industry.

Dasault Aviation, a French firm, and Arion and Gulfstream Aerospace, two American companies, are among those developing technologies for private supersonic jets.

Breaking the sound barrier generates a sonic boom, so supersonic travel is restricted over land. Tests by NASA with a modified fighter jet have shown that novel airframe shapes can reduce the boom. But Arion believes a far better approach is to fly supersonic only over water.

The company’s eight-to-12-seat Supersonic Business Jet, designed but not yet built, sports thin but broad “knife edge” wings and other aerodynamic features that produce less drag than competing designs.

America’s armed forces see potential in hypersonic aircraft, which fly at Mach five or faster using a type of engine known as a scramjet. Despite setbacks in testing, Boeing has said it believes the technology has crossed over the threshold into hypersonic flight. It believes scramjets might one day power civilian aircraft.

It had three separate kinds of engine: ordinary jet engines (running on biofuels made from seaweed or algae) for take-off, rocket engines to accelerate to Mach two point five, and ramjets to reach Mach four. The aircraft would carry 50 to 100 passengers and would travel from Paris to Tokyo in around two point five hours, rather than the 11 hours it takes today.

Even its designers admit that the ZEHST is unlikely to be flying before 2040. But “the future of air travel will look something like the ZEHST,” declared Jean Botti, director-general for technology and innovation at EADS in Paris.

One suspects the Wright brothers, were they with us today, would be proud.