The Coming Of Cyber World War I - Gulf Business 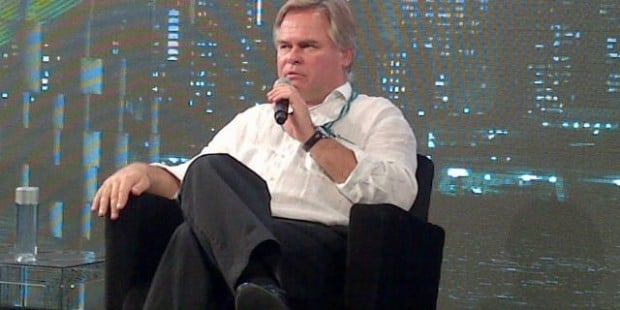 Dawn of the cyber war. It sounds sensational, doesn’t it? A ripping title for the next zombie blockbuster. But according to Russian IT whiz kid and anti-virus founder Eugene Kaspersky, the cyber aliens are already here. And soon they will be visibly monstrous.

Accordingly to Kaspersky, it’s not a question of when there will be a global cyber catastrophe, but ‘when’ and ‘how bad’.

In an age where all data is moving towards the cloud and, therefore, is stored in one place (not in a cloud, but often in outsourced server basements), mass destruction, cyber-espionage and data theft are rife. Throw in complacent IT staff, the global smartphone explosion and an uptick in employees accessing corporate data from their own devices, and the potential for cyber malignity has reached a dangerous tipping point.

33 per cent of employers have no problem allowing staff to use their personal mobile devices to access full corporate data, according to Russian IT security firm, Kaspersky Lab. But who’s monitoring the users? Hardly anyone. Only 11 per cent of firms have a viable mobile security strategy in place, says Kaspersky Lab.

Many firms are presiding over a gaping human hole in their security plan– while ever-more sophisticated hackers exploit unsecured devices to dig a path into company nerve centers.

In the summer of 2012, Kaspersky Lab and B2B International conducted a survey of 3,300 IT professionals from 22 countries. The results showed that 61 per cent of the companies had suffered at least one successful malware attack. In 57 per cent of those cases the malware infection led to critical data either being lost or stolen.

“Today’s attacks are often motivated by financial gain, data theft or activism. Three to five per cent of corporate PCs and 20 to 30 per cent of consumer grade PCs are currently being attacked by botnets,” said Lawrence Orans, research director at Gartner Inc.

“The bring your own device (BYOD) culture will connect the dots and see the consumer device infecting the corporate environment.”

The rise of advanced malicious programmes has transformed the global cyber threat landscape. Unlike traditional cybercrime, such as online banking, which is driven by monetary profit, last year’s programmes such as Stuxnet, Flame and Gauss, were highly developed cyber-warfare operations aimed at data theft and espionage.

“Every industry can be a victim of an attack, from power companies and telecommunications to banks, transportation and the military,” said Eugene Kaspersky, founder and CEO of Kaspersky Lab.

“Some enterprises are facing thousands of attacks a day, while others wonder if they are going to be hacked or not. This will occur across all industries and infrastructures, and we have to think and accept that as a reality. We live in a dangerous world.”

In mid-April 2012, a series of cyber- attacks destroyed computer systems at several oil platforms in the Middle East. The malware responsible for the attacks, named ‘Wiper’, was never found. However, during the investigation, Kaspersky stumbled upon a huge cyber- espionage campaign now known as Flame. ‘Flame’ is arguably one of the most sophisticated pieces of malware ever created – it even came with its own fake in-built Microsoft authentication certificates.

Worryingly, the Flame campaign had been collecting data for at least five years prior to Kaspersky Lab’s discovery last year. The problem with cyber-espionage in 2013 is that its warpath is silent, untraceable and ongoing. Kasperspy says it will take at least 10 years to crack the Flame code and even then it may prove impossible to decipher its exact origins.

Roel Schouwenberg, senior researcher, Americas, global research and analysis team, Kaspersky Lab, told Gulf Business: “Flame and its brothers have a Middle Eastern focus. Some of the things Flame did were absolutely revolutionary, however, the top global security event of the year was Saudi Aramco, where 30,000 computers had their data wiped by the Shamone attack. It was the first time that a company that deals a lot with the West was targeted. It was an obvious cyber-sabotage attack.”

Schouwenberg deduced that the Aramco attack was likely to be perpetrated by a ‘nation state’.

Hundreds of industry experts gathered at the 2013 Kaspersky Cyber-Security Summit in New York City in January to discuss the future of cyber warfare and how the world can prepare itself against assault.

The conference was timely amid US firms, including The New York Times, The Wall Street Journal and The Washington Post, falling victim to Chinese hackers. Millions of Twitter, LinkedIn and Dropbox passwords have also been stolen by anonymous sources in recent months.

The New York Times revealed its computer systems were infiltrated over a period of four months, during which time its reporters were investigating the personal fortune of Chinese premier Wen Jibao – a claim denied by the Chinese government.

China has been accused of mounting a widespread cyber-spying campaign for several years, and trying to steal classified information and corporate secrets, particularly from journalists.

According to experts, China, in particular, has become increasingly adept at disguising botnets and re-routing them through America to camouflage their origins.

Today, the level of entry for cyber warriors is much lower than traditional military warfare, but the consequences could be equally catastrophic.

“Cyber weapons can easily be tampered with and used against innocent victims, especially because our infrastructures were developed over 30 years ago and they haven’t been updated,” said Costin Raiu, director of global research and analysis at Kaspersky Lab.

“You can be sure that this will happen. And no one will take responsibility because cyber weapons are anonymous.”

Panellist Howard Schmidt, former cyber-security coordinator of the Obama Administration, pointed out that even the smallest blackout, say, of a routine ticketing machine at an airport, could lead to a domino-effect standstill as flights are delayed and chaos descends on the aviation industry. And this is just a relatively benign example.

Previously, hacking was largely the domain of criminals who would sell information to other criminals, but today it’s likely that organised criminals are selling information to nation states, or that nation states themselves are perpetrating the hacking. Cyber hacking lends states and individuals a powerful economic and political edge.

Schmidt said: “It’s getting to the stage where anyone can hack, so there’s become a level of morality involved; it’s like when some governments saw that money-laundering was an issue a few years back but it benefited them so they turned a blind eye. Who is committing cybercrime? Why are they doing it? And how do we stop it?”

Experts said the three points of notes in cyber war are:
› Companies could become collateral victims in the war between superpowers
› Ideas from state nation cyber weapons could be repurposed and copied by amateurs
› Cyber criminals may start using weapons gleaned from governments and nation states

To stem the coming cyber cataclysm, experts agreed that more IT security modules must be included in business education curricula. A case in point: Kaspersky’s survey in 2012 found that 31 per cent of respondents had never heard about any of the most common cyber-threats, including direct threats to their companies.

“There needs to be basic education. Companies must find a balance between security and freedom. There are not enough experts to cover the next five,
10 or even 15 years,” said Kaspersky. The days of using defaults or first names for passwords must end, said experts in a mounting call against the lax consumer approach to security. In a wider diatribe, Kaspersky warned that global leaders must meet to sign an international treaty against cyber weapons.

“There should be the same treaty as there is for nuclear and biological weapons, and a focus on finding the culprits,” he said.

But until the nation states have their own weapons used against them, there is little chance of the treaty being signed, said experts. It will take Cyber World War I to make that happen.