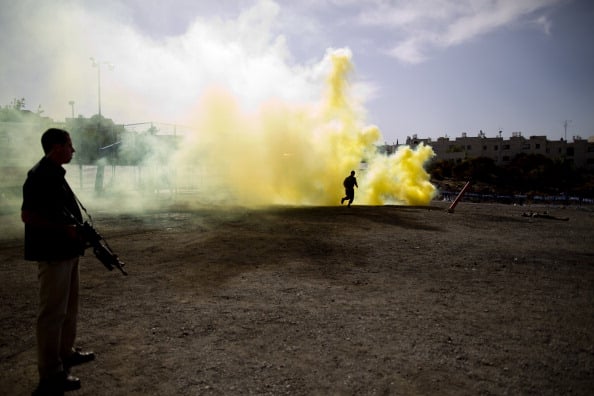 If Saddam Hussein’s Iraq is anything to go by, destroying Syria’s massive chemical weapons arsenal will mean checking dozens of far-flung sites in a war zone while the government employs delaying tactics to hide the banned munitions, an expert involved in past U.N. disarmament missions said.

“It’s big. He has one of the biggest chemical weapons programmes in the region and even in the world,” said Dieter Rothbacher, a former U.N. weapons inspector in Iraq who trained members of the team that just returned from Syria.

“There are calculations that to secure them up to 75,000 ground troops are needed,” he said in a Reuters interview. “It took us three years to destroy that stuff under U.N. supervision in Iraq.”

First there needs to be an iron-clad agreement, either by Syria joining the Chemical Weapons Convention, but more likely in the form of a U.N. Security Council agreement, in which Damascus relinquishes control of the weapons.

It could be similar to Iraq, where a U.N. Security Council resolution forcing Iraq to declare and destroy its chemical weapons. Certain militaries are already preparing for that scenario, Rothbacher said.

Russia proposed on Monday that Damascus could avoid U.S. military action to punish it for allegedly using chemical weapons in an attack in Damascus last month by agreeing to put its stockpiles under international control.

The Syrian chemical weapons programme, set up in the 1970s, reportedly with assistance from Iran and Russia and supplies of raw chemicals from Western companies, was designed to counter Israel.

Its stockpile is believed by Western intelligence to be spread over dozens of sites and includes research and development centres and multiple production sites, some of them underground.

Along with Egypt and Israel, Syria is one of just seven countries that is not a member of the 1993 Chemical Weapons Convention, overseen by the Hague-based Organisation for the Prohibition of Chemical Weapons.

Even if Syria follows through with the Russian plan drafted this week to let inspectors in, history also shows there is no guarantee of smooth sailing.

Syria’s civil war, now in its third year, has already cost 100,000 lives, excluding as many as 1,400 believed to have been killed in the gas attack in Damascus on Aug. 21, and security will be a major concern.

“Cruise missiles were coming in when we were stationed in Baghdad and we were flying out every day for the destruction,” said Rothbacher, who now co-owns a weapons training consultancy, Hotzone Solutions.

Inspectors would begin by mapping out suspected locations and visiting them, then assemble chemicals and munitions at a purpose-built destruction facility.

“The Iraqis had moved all their munitions. They moved the bulk (chemicals). They spread it out, which made our work much more difficult,” Rothbacher said, describing how Saddam’s forces tried to undermine their efforts.

U.S. officials believe Syria has been moving its chemical stocks, which will make it harder to account for them.

Assad spent decades building an arsenal to deter the militarily superior Israel, which reportedly has both conventional and non-conventional weapons.

Elements of the Syrian military and intelligence apparatus consider destroying the chemical weapons a huge sacrifice that will compromise Syria’s regional strategic position and possibly weaken them domestically.

Some experts believe the chemical weapons destruction cannot go ahead during war and warned that Assad may apply the delaying tactics used by Saddam to throw off inspectors.

“He knows that the inspectors must have the cooperation of the inspected state and he certainly saw in chapter and verse how Saddam Hussein’s Iraq repeatedly did everything to hinder the inspectors,” said Amy Smithson, an expert in chemical warfare at the Monterey Institute of International Studies.

Another priority will be ensuring the weapons don’t fall into the hands of militant groups seeking to further destabilize the region.

“It’s a tricky business to keep iron-clad control of multiple chemical sites that are located in urban settings that are themselves engulfed in an urban war,” Smithson said.