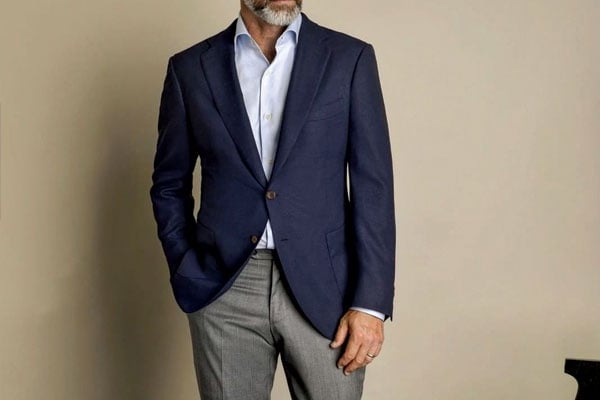 The crisp alpine air of Patagonia is unlike almost anywhere on Earth. Yet reaching this region in Argentina – where flocks of woolly sheep grazing on the steep slopes of snow-capped mountains vastly outnumber humans – is no simple task. Unsurprisingly, exporting wool from sheep that live closer to the South Pole than the Equator is expensive. Yet the remote farms near the city of Trelew in Patagonia are where Matthew Benjamin and James Siggers of Dubai-based menswear label Benjamin Siggers found themselves recently. “It was pretty cold,” laughs Benjamin of the design duo’s July visit – winter in the Southern Hemisphere. They met with sheep farmers, herders, shearers and distributors there to learn more about the process of procuring 100 per cent organic wool – which will soon be used in its suits and accessories.

Benjamin says that organic wool is more than just wool without anything added to it. Not only must no fertilisers or pesticides be used, even on the grass and other vegetation the sheep graze on (and of course the sheep cannot be treated with hormones or other drugs), but also the byproducts must be reused. For instance, the grease from the sheep’s wool is re-used for automobile wax, hair products, and more. Benjamin stresses that sourcing organic wool from the bottom of Argentina to be used for clothes sold in Dubai is not cheap. Adding to the costs is the fact the wool must first be sent to Biella, Italy, to be woven into fabric and then eventually made into suits – which customers can hopefully begin purchasing next month.

That’s also far from the only thing the label is doing to be sustainable. As Benjamin says, the silk used for ties comes from the only organic silk farm in China, located in Sichuan Province and also completely fertiliser and pesticide-free. Buttons for its suits are made from a biodegradable product called organic corozo (sometimes called “vegetable ivory” because it looks like ivory), sourced from seeds that have fallen from Tagua trees (meaning there’s also no need to chop down trees to harvest the raw materials for the buttons). Even the hangers – made in Italy from Macedonian beech wood – and garment bags (created from recycled cotton sourced from India) are sustainable.

Benjamin says there’s more to business than simply making money. “It’s not easy doing this. We don’t charge extra for suits because we’re using organic wool. We just feel it’s the right thing to do. We can always be more sustainable,” he says. “Brands should be doing more. Consumers should be demanding more.”

An increasing number of menswear brands are focusing on sustainability in the Middle East. For instance, London-based Joseph & Alexander has launched a new line of shorts in collaboration with Emirates airline. The “Emirates Landing” collection uses recycled fabric derived from ocean plastics and eco-friendly ink in the textile designs. “The most important element for me was making the brand sustainable and creating a talking point for children,” explains Joseph & Alexander founder Alana Sorokin. “With the serious global topic of ocean plastic dominating environmental headlines, it made sense to make the shorts from recycled plastic.”

Elio Moussallem, CEO of Lebanon-headquartered Maison JE concept store and menswear line, says sustainability has moved beyond a “buzzword” into a vital focus for any label, regardless of how “traditional” its clothes and customers might be. “Fashion at some level poses the idea of excessive consumption, whereas sustainability implies minimising consumption to the level of necessity,” he says.

Like Sorokin and Benjamin, Moussallem also practises what he preaches. For example, his brand’s shirts are made from leftover material and do not incorporate synthetic colouring. In addition to using organic cotton, they’re also made with recycled polyester. “The earth is a dynamic, living system with finite resources that must be protected,” says Moussallem. “I believe fashion can be a universal player in protecting the planet. Fashion is certainly a huge part of everybody’s lives.” He adds, “Sustainability is the future – and in fashion as well, people are more aware of its importance. If big companies lead, the small ones will follow.”

Those big companies are leading. In late August, on the sidelines of the Group of 7 summit that saw the leaders of the world’s seven largest economies come together in Biarritz, France, 32 of the biggest fashion companies on earth signed a pledge to promote sustainability and do their part to protect the planet. Known as the Fashion Pact, signees include the likes of Adidas, Burberry, Chanel, Hermès, Karl Lagerfeld, Kering, Moncler, Nike, Prada, Puma, Ralph Lauren and Stella McCartney – a group which, in total, represents annual sales in the billions of dollars and a presence in just about every international market.

The Fashion Pact brings large companies together, but several of them already are aggressively pushing to become more sustainable. Stella McCartney in particular has gone to great lengths to promote sustainability, including in its menswear. Using organic cotton, re-engineered cashmere, sustainably-sourced fibres from forests, vegetarian (faux) leather, silk gathered from forests after the silkworms have turned into moths, investing in low-impact, recycled or recyclable metals and not using real fur are just a few things the label is doing. Like Benjamin Siggers, wool is also sourced sustainably, despite the extra expense. Then there’s simply creating pieces that consumers won’t want to throw in the bin. As McCartney told Vogue in February this year, “One of the things you have to do, and the most sustainable thing you can do as a designer, is to create pieces that people want and won’t want to throw away.”

Yet there are concerns if it’s enough. For one, “fast fashion” – popularized by the likes of Zara, H&M and other retailers – is an entire business model based on consumers buying an item that’s on-trend, wearing it for a short time, then discarding it for a new item that’s on-trend. According to the World Resources Institute, the annual value of clothing discarded prematurely (thrown in the rubbish before it needs to be) is more than $400bn. Considering it also takes more than 2,700 litres of water to make one cotton shirt (enough water for the average person to drink for two-and-a-half years), the rise of fast fashion can create additional demands on already strained natural resources. However, the World Resources Institute also says that by becoming more sustainable, fashion labels could provide a $192bn benefit to the global economy by 2030.

Benjamin readily admits there’s a long way for the fashion industry to go towards becoming sustainable, including in the Middle East. But he says that the fact that we’re even having conversations about sustainability and that major labels are having such conversations is at least a start.

“There are things we need to do as a world to promote sustainability, whether that’s eating less meat or encouraging wearing sustainable clothing.”