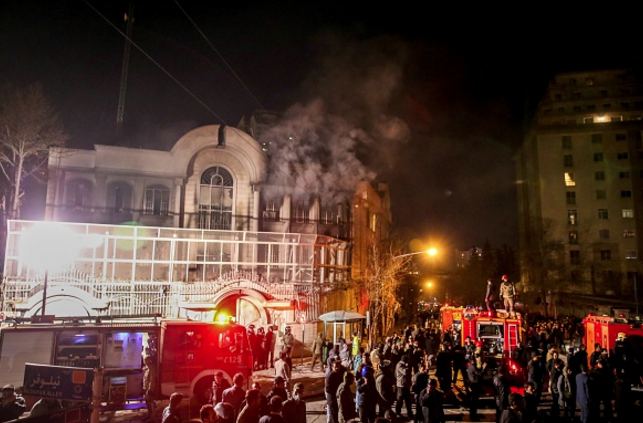 The suspects are accused of “disturbing the public order and damaging embassy buildings”, according to state media. Around 10 other suspects were absent from the first hearing.

The Iranian government condemned the assault and Rouhani, keen to improve Tehran’s long-strained relations with neighbours and the West, asked the judiciary to punish the protesters and prevent further attacks.

Such incidents have recurred throughout the Islamic Republic’s 37-year history, often harming its foreign relations. Protesters attacked the U.S. embassy in 1979, Kuwait in 1987, Saudi Arabia in 1988, Denmark in 2006 and Britain in 2011. None of the assailants were convicted.

Iran’s judiciary announced in April that more than 100 suspects had been arrested over the attack on the Saudi missions and 48 charged. All were released on bail.

At Monday’s hearing, a 25-year-old defendant said he had learned of the protest action against the Saudi embassy from social media groups “said to be linked to the Revolutionary Guards”, according to the ISNA news agency.

The Revolutionary Guards Corps is the strongly anti-Western and most powerful military and security force in Iran. Some Guards commanders condemned the attack as a plot against Iran and suggested “foreign agents” had been behind it.

“I didn’t know the protest did not have a permit … I am regretful as I broke the heart of the supreme leader (Ayatollah Ali Khamenei),” ISNA quoted the unnamed defendant as saying.

Khamenei, the highest authority in the Islamic Republic, has said the attack was “very bad and wrong” and had “damaged the country and Islam”.

A defence lawyer said two of his clients were absent from court as they were fighting in Syria against the rebels. Iran is allied with President Bashar al-Assad in Syria’s civil war while Saudi Arabia has supported his opponents.

Another defendant at Monday’s hearing testified that he had been on an errand to a pharmacy but was arrested by security forces when he stopped his car to watch as protesters set fire to the embassy building.

Some of the defendants said they had gathered in front of the embassy to protest against the “Saudis’ crimes in the Yemen war,” but they had not thrown stones or entered the building.

One said he entered the embassy to help people who were caught in the fire.

Speaking at the judiciary’s annual gathering in June, Rouhani urged the courts to take action.

“People want to know how the judiciary will deal with those who attacked the embassy against the law and Iran’s national security,” Rouhani said. “They are waiting to hear the verdicts for these rogue elements.”

Since reaching a landmark agreement last year on curbing its nuclear programme, Rouhani has sought to repair Iran’s international relations.

But the embassy assault harmed that effort and caused Saudi allies such as Bahrain and Sudan to sever diplomatic relations. The United Arab Emirates downgraded its ties.

The second hearing will be held on Tuesday, state news agency IRNA said.