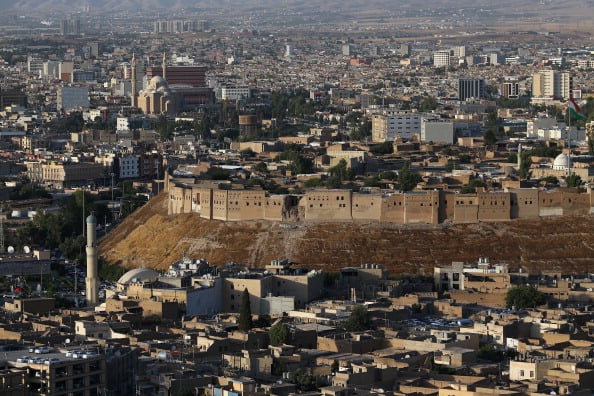 Sunni militants spearheaded by the Islamic State in Iraq and the Levant (ISIL), a hardline al Qaeda offshoot, have pushed the army from cities and towns across Iraq’s north and west over the past two weeks, shocking the Shi’ite-led government.

On Saturday, fighters seized the border post near the town of al-Qaim, helping ISIL secure supply lines to Syria, where it has exploited the chaos of the three-year-old uprising against President Bashar al-Assad to establish a major presence.

ISIL’s stated aim is to create an Islamic Caliphate which ignores boundaries set by colonial powers a century ago. Sunni tribes in the mostly desert border regions span both sides of the frontier.

The fall of Qaim represented another step towards the realization of ISIL’s military goals, as a twentieth centry border appeared to crumble in a day.

On Sunday, Sunni militants led by ISIL expanded their grip to the towns of Rawa and Ana along the Euphrates River east of al-Qaim, as well as the town of Rutba further to the south on a road leading from Jordan to Baghdad.

A military intelligence official said troops had withdrawn from Rawa and Ana after ISIL militants attacked the settlements late on Saturday night.

“Army troops withdrew from Rawa, Ana and Rutba this morning and ISIL moved quickly to completely control these towns,” the official said, speaking on condition of anonymity. “They took Ana and Rawa this morning without fighting.”

The office for the prime minister’s military command said it had no immediate comment and would be giving an update on events in a press conference later on Sunday.

The Euphrates towns are on a strategic supply route between ISIL’s positions in Iraq and in eastern Syria, where the al Qaeda spinoff has taken a string of towns and strategic positions from rival Sunni rebels over the past few days.

The last major Syrian town not in ISIL’s hands in the region, the border town of Albukamal, is controlled by the Nusra Front, al Qaeda’s branch in Syria which has clashed with ISIL but also agreed to local truces at times.

ISIL, which began as al Qaeda in Iraq but was disowned by the central organisation in February, has captured the north’s biggest city, Mosul, and pushed down the Tigris River valley, seizing towns and taking large amounts of weaponry from the fleeing Iraqi army.

Overnight, ISIL fighters attacked the town of al-Alam, north of Tikrit, according to witnesses and police in the town. The attackers were repelled by security forces and tribal fighters, they said, adding that two ISIL fighters had been killed and two others arrested.

State television reported that “anti-terrorism forces” in coordination with the air force had killed 40 ISIL members and destroyed five vehicles in fighting in Tikrit.

There was a lull in fighting at Iraq’s largest refinery, Baiji, 200 km (130 miles) north of the capital near Tikrit, Sunday morning. The site had been transformed into a battlefield since Wednesday as Sunni fighters launched an assault on the plant. Militants entered the large compound, but were fended off by Iraqi military units and currently surround the refinery’s main gates.

A black column of smoke rose from the site, but refinery officials said it was the result of a controlled burn to deal with waste from the site.

The advance has been driven by an amalgam of Sunni tribal and Islamist militias, and former officers of Saddam Hussein’s Baath Party, united in their hatred of Maliki’s Shi’ite-led government, which they accuse of marginalising their sect. But ISIL has spearheaded the revolt and assaults on cities and towns.

Relations between the diverse Sunni groups have not been entirely smooth. On Sunday morning, clashes raged for a third day between ISIL and Sunni tribes backed by the Naqshbandi Army, a group led by former army officers and Baath party loyalists, around Hawija, a Sunni bastion southwest of Kirkuk, local security sources and tribal leaders said.

More than 10 people were killed in the clashes in the towns, which lie southwest of Kirkuk, the sources said.

On Friday evening, ISIL and Naqshbani fighters began fighting each other in Hawija, where a crackdown on a Sunni protest over a year ago triggered unrest leading to the current insurgency. Iraqi and Western officials believe that as ISIL and other Sunni factions start to consolidate their control of newly-won territories, they will start turning on each other.

U.S. President Barack Obama has offered up to 300 U.S. special forces advisers to help the Iraqi government recapture territory seized by Sunni armed groups including ISIL but has held off on granting a request for air strikes.

The fighting has further splintered Iraq along sectarian lines and highlighted divisions among regional powers, especially Iran, which has said it would not hesitate to protect Shi’ite shrines in Iraq if asked, and Saudi Arabia, which has warned Iran to stay out of Iraq.

Iraq’s Kurds have meanwhile expanded their territory in the northeast to include the oil city of Kirkuk, which they regard as part of Kurdistan.

The government has mobilised Shi’ite militia to send volunteers to the front lines – thousands of fighters in military fatigues marched in a Shi’ite slum of the capital Baghdad on Saturday.