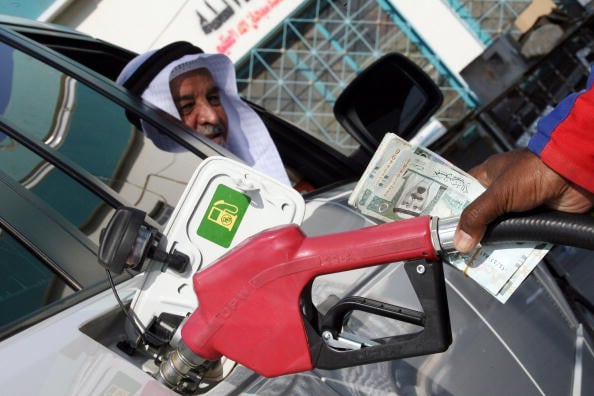 Water and fossil fuel subsidies have recently attracted a lot of attention in Saudi Arabia, where the economic and social problems they cause have forced the government to undertake reforms. Subsidies severely underprice scarce goods and resources like water, fuels, and electricity, and their consumption has important implications for the environment.

Subsidised gasoline and water may seem like a great privilege. The costs of underpricing these resources, however, are immense and outweigh the benefits. The government and citizens, for instance, forego the opportunity to use the vast sums of money spent on these subsidies in a more efficient manner, say by building better schools and hospitals. Underpriced water gives consumers little incentive to conserve. Similarly, underpriced gasoline causes drivers to drive more and waste this non-renewable resource.

Moreover, these subsidies increase the external costs of consuming water and energy – costs that are not paid by consumers but are paid by society. These costs include traffic congestion, risk of car accidents, and human health risks from the pollution. Underpriced goods are clearly inefficient. But what is the efficient price? It is conceptually the price that the good would be traded for in a market where all true production and external costs are taken into account by participants in the market place.

The economic costs of subsidised fuels to the global economy are huge. Lucas Davis, a professor of business and economics at the University of California at Berkeley, estimated that the global annual cost of the overconsumption of gasoline and diesel alone is around $44bn (based on the 2012 overconsumption). This number does not even include the external costs that push global losses even higher.

Saudi Arabia alone accounted for 27 per cent of the total global loss, a huge figure that the government has not ignored. It recently changed the fuel subsidies structure slightly, and clearly intends to take more measures to address the problems posed by underpriced fuels.

Fossil fuel subsidies in Saudi Arabia are very distortionary and lead to the concentration of capital in the energy and transportation sector. Studies suggest, for example, that low fuel prices in Saudi Arabia have created a polluting, energy-intensive economy that makes economic diversification, a government objective, even more difficult.

Over consumption of ‘dirty’ fuels also contributes to higher air pollution. Saudi Arabia, and other Gulf Cooperation Council countries that heavily subsidise fuels are threatened by high carbon emissions in the region. Though not industrial, the region has per-capita CO2 emissions that exceed some of the world’s leading industrial countries. For instance, Figure 1 shows that Saudi Arabia has higher per capita emissions than the United States.

The consequences of pollution are alarming even if one contends that the region’s high per-capita carbon intensity is attributable to small populations rather than high emissions. Elfatih Eltahir, a professor of environmental engineering at the Massachusetts Institute of Technology, warned recently that Abu Dhabi, Dubai, Doha and Dharhan will be hit by fatal temperatures by the end of this century because of anthropogenic carbon emissions, if no mitigation efforts are taken. 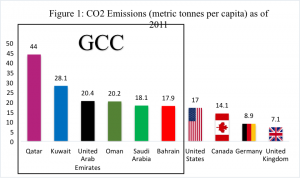 Water subsidies in Saudi Arabia are no less burdensome. The country relies heavily on water desalination plants because of severe water scarcity. This makes water extremely expensive to deliver to consumers, though the subsidies ensure they do not see high prices. The desalination plants themselves are energy intensive and heavy burners of subsidised fossil fuels.

Even though governments recognise the importance of eliminating subsidies, many countries are still hesitant to restructure. Eliminating subsidies is a challenging task. In a recent TV interview, Saudi Arabia’s Deputy Crown Prince Mohammed Bin Salman, focused on the kingdom’s Vision 2030, an ambitious blueprint of goals and expectations drafted by the Council of Economic and Development Affairs and endorsed by the Council of Ministers to transform the economy. The prince promised to eventually reform subsidies, noting that 70 per cent of subsidy expenditures go to high income groups because richer households own more cars, live in bigger houses, and consume more water and energy than low income households. He also highlighted the challenge of removing subsidies on the low-income families and the need to design a policy that does not marginally burden them.

Based on the 2013 data, households that spend between SAR 3,000 and SAR 9,000 per month allocate on average around 30 per cent of their spending to water, electricity, gas, and other fuels, as shown in figure 2. The same is true of households that spend between SAR 9,000 and SAR 15,000 per month. A family that spends only SAR 2,000 to SAR 3,000 per month allocates on average well above 40 per cent of its budget to water and energy. But the richest households in the country (who spend SAR 25,000 or more a month) devote only about 10 per cent of their expenditures to these staple goods. Thus, the burden of water and energy expenditures for an average family is three times greater than it is for the richest families on average. 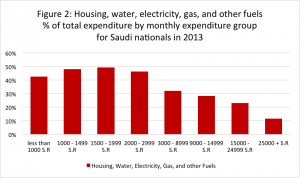 So while it is true that relatively wealthy households consume more water and energy, poorer households will feel subsidy restructuring most acutely. It is not surprising, therefore, that the recent water price restructuring eventually led to the replacement of the water and electricity minister.

The million-dollar question is how to design a restructuring policy that is practical and receives political and social support. A well designed policy may need to be gradual to be successful, but it also must not disproportionately burden average and low income households. The price restructuring should burden the family whose majority expenditure item is five-star vacations at least as much as the family that barely covers the costs of other necessities after paying their utility bills.

Designing such a scheme requires measures that aid low-earning households more than the richer ones. The challenge is to introduce a mechanism to do so. Without an income or payroll-tax system in the country, this is seemingly more complex.

Subsidising other necessities, by using revenues saved from restructured water or energy prices to benefit low-income households, solves one problem by introducing another one, ultimately leaving us in circles.