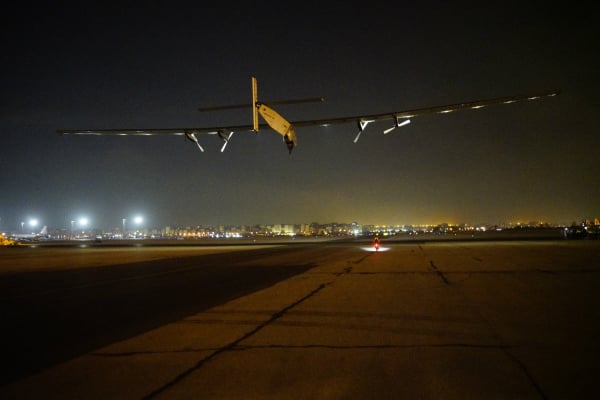 Solar Impulse 2 has begun its final flight in a historic round-the-world trip using nothing but solar power.

The zero-fuel aeroplane, which is sponsored by UAE clean energy firm Masdar, took off from Cairo, Egypt at 3am UAE time piloted by the project’s co-founder, Bertrand Piccard.

It is expected to arrive at Abu Dhabi’s Al Bateen Airport on Tuesday, where its journey began more than a year ago on March 9, 2015.

“I’m excited to come so close to the goal, but unfortunately there are still so many people we have to motivate before having a world running on the same clean technologies,” Piccard, who initiated the project 12 years ago, told UAE publication The National.

The project’s other co-founder and co-pilot Andre Borschberg described the flight as “living the final moments of a once in a lifetime adventure contributing to setting a new milestone in aviation” based on clean and efficient technologies rather than speed or height.

UAE, state news agency WAM said the final leg of the journey would be as challenging as the previous 16, due to the heat in the Middle East.

The hot temperatures are expected to test the limits of the plane by causing thermals and turbulence and forcing the pilot to wear an oxygen mask for extended periods of time.

“We have never had to deal with temperatures so high before on our round-the-world tour, but a little challenge at the end of our mission is always good,” Solar Impulse said on their blog.

Piccard and Borschberg have piloted the plane for the entire trip, stopping off at 16 cities to raise awareness of the power of renewable energy.

It took the plane five days to cross the Pacific and Atlantic respectively, pushing each pilot to their physical limits.

Conditions crossing the Saudi desert are expected to be challenging due to the extra effort required by the craft’s engines in the warmer, thinner air. This will require the pilots to manage the plane’s energy reserves so that it can sustain itself during the night hours.

“We thought it was going to be an easy flight because it’s always good weather between Egypt and Abu Dhabi across Saudi. But actually, it’s extremely difficult to find a good strategy,” Piccard told reporters before the flight.

Solar Impulse 2 was originally due to arrive in Abu Dhabi on Sunday July 18 but was delayed by bad weather conditions and later a stomach bug afflicting Piccard.