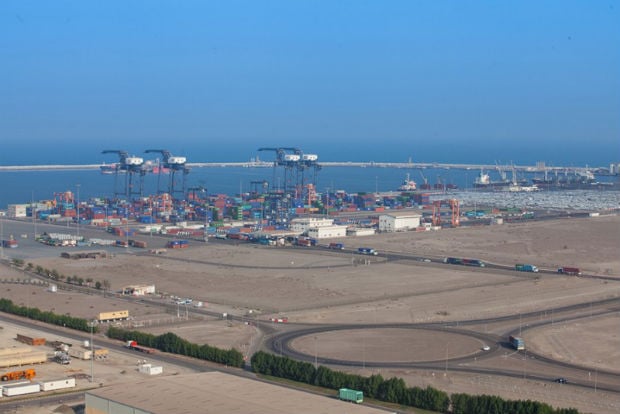 An advertisement by the highway outside Dubai’s massive Jebel Ali Port tells firms they don’t need to ship goods through the Strait of Hormuz, the traditional gateway to the Gulf. Instead they can have goods delivered to a port in Oman, outside the Gulf, and bring them into the region by road.

“Why go through the Strait when you can go straight to the Gulf,” the billboard reads, in a challenge to Jebel Ali, which has become one of the biggest ports in the world by handling many of the region’s imports via Hormuz.

The cheeky advertisement has been posted by Sohar Port and Freezone, an ambitious facility on Oman’s northern coast about 200 kilometres (125 miles) to the southeast of Dubai.

Sohar is starting to compete for traffic with Jebel Ali and other top ports inside the Gulf, as part of a far-reaching plan by Oman to diversify its economy beyond oil. Its plan says a lot about how business in the region may develop in coming years.

Edwin Lammers, Sohar’s executive commercial manager, said the port’s intention to handle cargo for the Gulf region, not just Oman, was a key part of the country’s drive to industrialise.

“It brings down supply chain costs for Oman,” he said in a telephone interview at the Reuters Middle East Investment Summit. “Once you have the additional capacity, new shipping lines come in, feeder lines operate and costs fall due to economies of scale.”

Oman faces, in a more immediate and acute form, the dilemma which all the wealthy Gulf oil exporters will face in coming decades: what to do when the oil runs out?

While Saudi Arabia, the United Arab Emirates and Qatar have ample reserves to continue production of oil and gas for decades, Oman’s reserves are much smaller, so crunch time for it is likely to come sooner. Estimates by multinational energy company BP have suggested Oman’s oil reserves could run out around 2030 at current production rates.

So the government of ruler Sultan Qaboos, 73, is ploughing billions of dollars into efforts to make the arid country of about 4 million people into a logistics and industrial hub.

Among big industrial and infrastructure projects planned or underway are a $3.6 billion plastics production complex to be built in the city of Sohar, a $400 million steel plant in the southern port city of Salalah, a string of new or expanded airports, and a $15 billion plan to build a 2,244 kilometre rail network, the country’s first.

Sohar port will handle many of the imports Oman needs for its industrialisation and exports which it hopes to produce. The Omani government and the Port of Rotterdam set up a 50:50 joint venture to run the port in 2002.

This year Sohar completed a $130 million relocation and expansion of its container terminal, which is operated by Hong Kong’s Hutchison Whampoa. The project raised annual capacity to 1.5 million twenty-foot equivalent units from 800,000 TEUs, and allowed the port to handle large container ships of 10,000 TEUs for the first time.

Sohar plans to increase its container capacity further to 4 million TEUs in 2017 at a cost of between 60 and 70 million rials ($155-180 million), which is likely to be raised through bank financing.

“Once that’s in place, you really start to compete with other ports in the region,” said Lammers, a Dutch veteran of the container port and stevedoring industries who joined the company in 2009.

The company launched a free zone in 2010 with tax and other incentives to attract companies’ logistics and manufacturing operations. Current operations include auto parts storage and distribution, and a chrome smelter; British-based Tri-Star Resources has said it plans to build a $60 million plant supplying about 12 percent of current global production of antimony, a metallic substance used in many alloys.

After a cyclone in 2007 disrupted Oman’s food supplies, the government wants to stockpile food reserves at Sohar; grain silos will be established there next year. Oman’s first sugar refinery will also be built at the port, with an eventual annual capacity of 1 million tonnes of sugar.

The entire Gulf depends heavily on food imports so Sohar hopes it can ultimately serve as a food reserve storage centre for the region, not just Oman, Lammers said.

Container traffic at Sohar has not been growing rapidly in recent months – it totalled 103,023 TEUs in the first half of this year, down from 110,453 a year earlier. Sohar’s plans are based on the assumption that rapid economic and population growth will continue around the region in coming years.

About 300,000 TEUs of annual container business was transferred to Sohar in the second half of this year when all of Muscat’s commercial traffic was relocated to Sohar.

“When you have plans for 20 million TEU capacity in both Dubai and Abu Dhabi, one can start to talk of the possibility of overkill,” said Lammers.

But he added: “They all fulfill their own role in the regional supply chain. With the economy in the region growing at 6 percent, it’s something they need to do.”

And Sohar has some cards up its sleeve. As long as geopolitical tensions persist in the Gulf, the port’s location outside the Strait of Hormuz has a potential security advantage. Iran has threatened in past years to close the narrow Strait, but would find it harder to project its naval power across the Gulf of Oman.

The future Omani rail system, which is to be connected to a planned railway network across the six Gulf Cooperation Council countries, may give a big boost to Sohar, helping it to handle larger amounts of heavy imports for the GCC such as automobiles and steel products.

The design contract for the Omani railway is expected to be awarded by the end of this year and Sohar should be connected to the system three years after that, Lammers said.

The GCC rail network “will have a game-changing effect on logistics in the region”, he said.

Just as the Port of Rotterdam became a gateway to Europe, serving the European hinterland, “we expect something similar to happen in Sohar.”