The top three most discussed topics in October across social platforms were electronics, education, and health in that order followed by entertainment, malls and retail, and automotive.

The most important electronics discussions last month were monopolised by Apple’s controversial decisions surrounding the release of the iPhone 12.

Apple’s newest flagship device marks a return of the iconic form factor resembling the squarish sides prominent in iPhone design from 2010 to 2014. Users regarded the wider range of choice in this year’s iPhone line favourably, as Apple released four different models: a mini model, a standard 12, a Pro version, and a Pro Max with the biggest screen ever in an iPhone.

However, aside from the attention given to the top-of-the-line specs and material, users across the GCC took issue with Apple’s allegedly eco-friendly decision to not include a wall charger with the newest iPhone. Many claimed that is just a brazen money-grabbing move by Apple to flex its extensive brand following and that by cutting costs but not reducing prices, it was placing the burden of the decision on the customer.

Users also questioned the effectivity of such a move for the benefit of the environment; many customers complained that since the longevity of Apple chargers is minimal, they would have to then buy a new charger anyway regardless of whether they owned one before.

Some users questioned the usefulness of the inclusion of 5G in the iPhone 12 line. Claiming that the technology is not currently accessible for all users in the GCC, many dismissed Apple’s claims of the revolutionary speeds of the technology. In fact, a viral video was also circulated in the region mocking the numerous times ‘5G’ was uttered in the iPhone 12 presentation video.

Educational discussions continued to revolve around the challenges and obstacles of operating schools during a pandemic.

Despite the continued efforts by national authorities in the GCC, students and teachers alike still struggle with the hurdles of online and hybrid education systems. From burnout and screen fatigue to risk of contagion and social anxiety, the pandemic has not only aggravated existing mental health difficulties but has also added new challenges to solve.

Individual countries are facing their own obstacles too. Users in Saudi Arabia, for instance, launched a hashtag to suggest to the education authorities to allow remote testing for students with special needs. Omani users are expecting a hybrid schooling system to be finally rolled out in November.

Meanwhile health conversations remained focussed on the latest developments in the fight against Covid-19 in the Gulf.

At the forefront of vaccine development, the UAE announced the successful completion of phase III of the Chinese Covid-19 vaccine in partnership with Sinopharm’s China National Biotec Group.

In addition, users expressed their gratitude and praise to the health authorities after the UAE also partnered with the Gamaleya Research Institute in Moscow for trials of the Russian Covid-19 vaccine. The UAE will be the testing ground for phase III of the ‘Sputnik V’ trials, and there seems to be a lot of support, based on public opinion.

As winter sets in, users from all over the Gulf expressed concern that colder temperatures usually usher the advent of the flu season, which, in combination with the pandemic, might exacerbate the difficult conditions already present for public health.

Moving to other discussions, France was at the centre of the intersection between malls, retail, and politics in October following President Macron’s comments following the terrorist attack in the French city of Nice.

All over the Gulf, both citizens and residents called to boycott French products and companies. A large number of users showed their commitment against French products – from brands like Cartier and Dior to Renault and Tefal – through viral hashtags as well as influencer actions. Supermarkets joined the initiative too, as many users showed empty shelves after French products were removed. 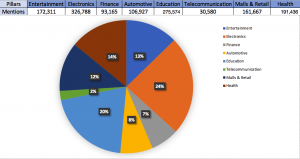 Methodology:
Netizency conducted a social listening across all social and online media from the GCC between October 1-31, 2020 to gather the information on popular trends.

– Updates audio tweet functionalities including the future inclusion of auto captions
– Tests ‘Birdwatch’, a new crowdsourced strategy to fight misinformation
– Considers a new ‘Suggested Follows’ section to enhance content discovery on the platform
– Sets quote tweets as the default retweeting option to encourage users to read before sharing
– Upgrades Reels’ audio tools to share, search, and save sounds from Reels
– Adds new misinformation warning if a user retweets any tweet flagged as misinformation

– Integrates Messenger into Instagram to stay connected with both FB Messenger and IG friends on the same app
– Launches Accounts Centre to manage logins and purchases from Facebook, Instagram, and Messenger in one place
– Launches ‘Emotional Health Resource Center’ to support people who are struggling with mental health problems
– Announces the ban of political ads after the US elections to avoid potential legitimacy conflicts
– Cracks down on offensive and dangerous content including the removal of all Holocaust denial content as well as the ban of anti-vax ads
– Enhances Automated Language Translation tools with AR to stop relying on English translations
– Improves discovery tools for FB Watch with new Topics and Highlights
– Brings back Spark AR Partner Network to offer business AR solutions
– Introduces ‘Neighbours’ features for users to connect with their local events and communities

– Brings free SMB tools to MENA to make use of the free listings available on Google Shopping
– Rolls out new trends tool to help advertisers stay up to date on the latest search trends within their niche
– Redesigns the alerts that pop up when a critical issue is detected with Google accounts
– Adds the ability to hum to search a song, and other text recognition features to search

Individuality breeds ingenuity, so why not be yourself?

The future of online food ordering in the GCC