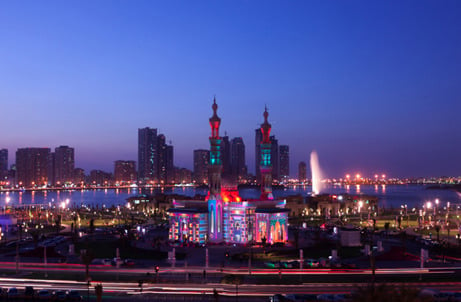 Before the recession hit the UAE, Sharjah was hailed as a haven of affordable living. But as gloom befell Dubai’s real estate market in 2008, Sharjah witnessed a decline with many of its residents choosing to take advantage of Dubai’s plummeting rents.

However, things are looking up for Sharjah again as experts predict a positive future for the emirate. According to a report released by the property management firm Asteco, the northern emirate has recorded a 16 per cent rise in rental rates over the last 12 months with budget-conscious tenants seeking more affordable homes.

But it is not just residents that are taking advantage of cheaper rents in the emirate. Real estate experts said that Sharjah has the potential to be a hub for SMEs in the country.

Shane Breen, associate director at Cluttons, Sharjah, said that the emirate’s office market has potential in the future given its affordability is attractive to small and medium enterprises.

“With relatively more affordable office space available, Sharjah has become the natural port of call for many who are unable to afford the higher rents in Dubai and Abu Dhabi.”

“The nurturing of this sector through government-backed initiatives, or the establishment of centrally located free zones could help the emirate further cement its place as the UAE’s first port of call for start up organisations, which, in turn, would help to support economic growth and diversification,” he said.

Breen said that developing the office market would also drive up employment levels and help Sharjah to progress its financial and business service sector.

Despite Sharjah’s industrial and logistics sector contributing around 20 per cent to the emirate’s GDP, Breen said that office space demand remains relatively inactive.

“Demand for office space is primarily driven by the construction industry and professional services with SMEs fuelling the commercial market.”

“However, we’re now starting to see more enquiries for large multinational companies either looking to setup in Sharjah or expand or upgrade their current offices,” he said.

The rise in demand for residences has also spilt over to other sectors, such as retail, and helped to spruce up Sharjah’s otherwise limited infrastructure.

“The recent opening of the Sahara Centre extension has been a great success with footfall through the mall increasing significantly. The development of Sharjah Mall also indicates strong belief by developers that there is sufficient demand in the market and that this demand will continue to rise,” said Breen.

In a bid to sustain the interest in its rental market, the government has also taken steps in improving the road networks.

Office spaces in selected areas in Sharjah have already begun to show an improvement in rents owing to a rise in demand.

According to a Cluttons report, office rents in popular areas like Corniche, Mina and Al Wahda experienced an increase of nine, five and four per cent respectively.

“Commercial towers are seeing occupancy levels rise and we expect to see prices start to slowly rise as the supply decreases,” said Breen.