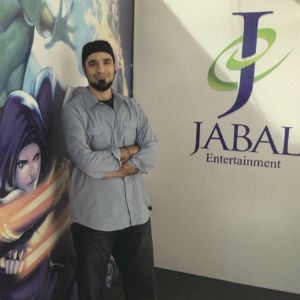 As I wait in the hotel lobby to have a quick chat with Sohaib Awan, I expect to see a stereotypical comic book-geek —complete with nerdy glasses and a t-shirt splashed with images of his favourite superhero.

However, the creator of the Jinnrise comic series looks anything but a nerd. Dressed in a formal jacket and looking very much a businessman, Awan greets me with a smile.

After all, like most comic superheroes, US-based Awan is also a multifaceted personality — a practicing lawyer and the CEO of Jabal Entertainment, a cross-media storytelling platform.

He also debates with creators of comic, film, and television universes during an hour-long radio talk show, Fictional Frontiers, on Monday evenings.

“Comic books are not for the geeks anymore,” he tells me. “It is only a stereotypical perception that everyone is a fan boy and you have to dress up like a character or wear a t-shirt with a logo,” he chuckles.

Awan, who is in Dubai for the annual Middle East Film and Comic Con event, is hoping to eliminate precisely these kinds of stereotypes about the medium in the Middle East and nurture a culture of story telling.

“Here in this region, I would like to see what happened in Japan because I think the Japanese comic book industry is the best model,” he explains.

In Japan, the most popular comics, called Manga, are not necessarily superhero tales, but also speak of the day-to-day life of people and enjoy a wide readership.

“What is beautiful about comics is that you have the narrative and you have the imagery as well. But it also allows some room for imagination to flourish. So once we introduce the medium here, people can take those stories home with them,” he says passionately.

There is also another stereotype that Awan is hoping to break; his Jinnrise series, unveiled at the 2012 Comic Con event in Dubai, aims to dissolve preset notions about the Middle East and build bridges between the east and the west.

The series has even been signed up by US-based IDW, the world’s fourth largest publisher of comic books, which publishes series like The Transformers, G.I. Joe and Star Trek.

“For them to approach us, for them to take a chance with us, there can’t be better validation than that about Jinnrise’s success,” says a smiling Awan.

Jabal recently released its second series, Drawn, created by a British-Sudanese writer based in Dubai and Awan looks forward to inspiring many more budding storytellers in the region.

“I think there is a definite interest in the region, but what is fascinating is that most of the interest is tied to properties that are coming in from the US and Japan. There’s never really been an effort to bring stories forward or to tell stories inspired by the myths or adventures of this region,” he states.

Although people like Dr. Naif Al-Mutawa, creator of The 99 series have made a good start, Awan feels the medium has not been developed to its full capacity.

“I would love to see the cultivation of talent here, I’d love to see the talents that I know are here being brought up to the same level as the rest of the world. That’s one of my altruistic goals,” says the CEO.

His message to aspiring regional comic book creators is simple: “The most important thing is to research and study before you take a leap and understand what it entails at basic level. Reading a lot of comics helps,” he says.

He admits that his advice is based on personal experience. “I probably read 200-300 comics a month…I am a fast reader,” he adds laughingly.