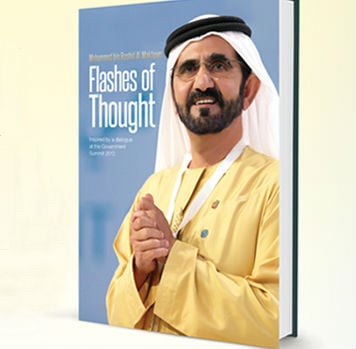 The phenomenal growth of Dubai and its aspiration to be number one are among the topics discussed in the English edition of Flashes of Thought, the latest book authored by Sheikh Mohammed bin Rashid Al Maktoum, Vice-President and Prime Minister of the UAE and Ruler of Dubai.

The book, based on an interactive question-and-answer session held by Sheikh Mohammed during the government summit in February 2013, covers a wide range of topics such as time-management, positive thinking, creativity and his leadership strategies.

“It [The dialogue at the summit] was an opportunity to explain and to reflect,” Sheikh Mohammed writes in the introduction.

“It became, in a way, a defining moment for a range of important ideas – including some that sit at the heart of our vision for this nation. So much so, in fact, that I was inclined to write a book documenting and expanding upon this dialogue.”

He adds: “Last but not least, I would like to point out that I am no scientist. Nor do I claim to be a wise philosopher. This is simply a collection of concise messages, experiences, ideas and thoughts, whose sole aim is to serve our nation and to bring some happiness to our fellow citizens.”

Sheikh Mohammed has written several other books, including My Vision: Challenges in the Race for Excellence, Mohammed bin Rashid Collection of Poems, 40 Poems from the Desert and Spirit of the Union.

The Arabic edition of Flashes of Thought was published in May 2013, and the English edition, published by Motivate, is available in bookstores from September 15. It is priced at Dhs65.