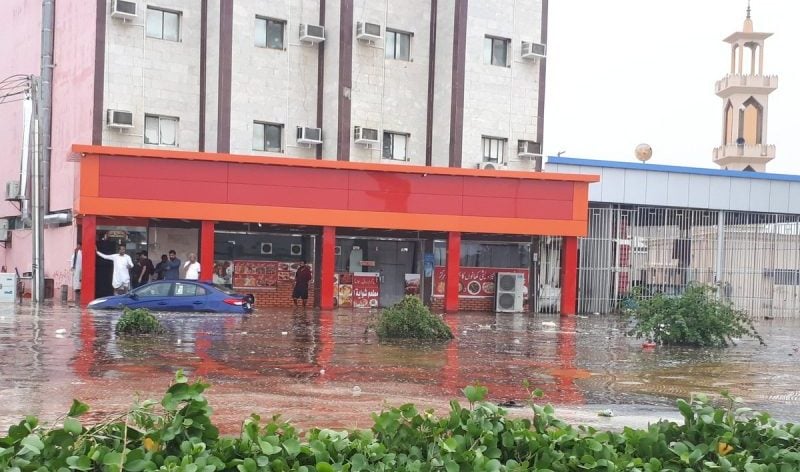 Several people have been rescued after they were stranded in heavy rains in Saudi Arabia’s northwestern region on Tabuk, the Saudi Press Agency (SPA) reported.

Heavy rains began early on Sunday across the region and its provinces, also causing flooding in certain valleys, the media spokesman for the civil defence in the Tabuk region Abdulaziz bin Farhan Al-Shammari said.

He added that the control and guidance centre received a number of calls from affected people. That included three children who were trapped during their picnic in Wadi al-Muweileh, west of Dabba Governorate, after the flood intensified and surrounded them and 37 people who were stranded in their vehicles in Wadi Atana and Wadi Rumda. All of them were rescued and evacuated from the area, he said.

The control centre also received calls from residents in the city of Tabuk, reporting flooding within their homes. A total of 10 families were evacuated from their accommodation and the relevant authorities have been informed to follow-up on their condition, Al-Shammari said.

The official also stressed that rains are persisting in the region, according to alerts from the General Authority for Meteorology and Environment Protection.

Many residents posted videos of the heavy rains on social media.

Al-Shammari warned residents about the dangers of floods and urged people to stay away from water-logged areas and electricity sources.

Severe weather conditions have been forecast for several parts of the kingdom with strong winds, rainfall and sandstorms set to affect Jeddah, Al-Jawf, Hail, Madinah, Makkah, Riyadh, the Eastern Province and southwestern and western highlands.