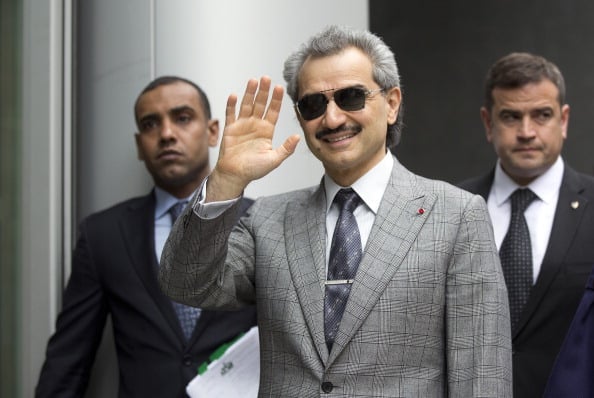 A billionaire Saudi prince was ordered by a British court on Wednesday to pay a $10-million commission on the sale of his private jet to Libya’s Muammar Gaddafi, in a humiliating legal defeat for one of the world’s richest men.

Prince Alwaleed bin Talal, a nephew of King Abdullah, had spent two days defending himself in the witness box in a rare public grilling of a senior Saudi royal.

Judge Peter Smith rejected the prince’s evidence on all key points in the dispute, describing it in his written ruling as “confusing”, “unreliable”, “hopeless” and “pathetic”.

The prince was being sued by Daad Sharab, a Jordanian businesswoman with close ties to Gaddafi, who brokered the sale of the prince’s jet to the Libyan leader between 2002 and 2006.

The prince, who is worth $20 billion to $30 billion, said he would appeal against the order to pay Sharab $10 million.

The jet at the heart of the dispute has a history as colourful as its customised interior, which boasted a jacuzzi, a king-size bed and silver-coloured leather sofas.

The ruling said it was sold to Prince Alwaleed in 2000 for $95 million by the Sultan of Brunei as part of a fire sale of assets acquired by his brother with misappropriated funds. The Saudi royal then sold it onto Gaddafi for $120 million.

Gaddafi sent the plane to pick up Lockerbie bomber Abdel Basset al-Megrahi when he was freed from a Scottish jail in 2009. It was shown off as a trophy by rebels who toppled and killed Gaddafi in 2011 and posed for the press on the plush sofas.

The prince denied agreeing to pay Sharab $10 million for her role in the sale. He accused her of stabbing him in the back by siding with the Libyans during the protracted sale process and said that was why in the end she was paid nothing.

“At the end of the day I simply found his evidence confusing and too unreliable and Mrs Sharab’s was more credible on any dispute of fact between them,” the judge wrote.

He said the prince had “made up” evidence as he went along when it was clear his memory of some of the details was poor.

“His attempts to bolster that defect in the witness box were frankly pathetic,” the judge wrote.

He refused permission to appeal, but a spokesman for the prince said he would seek permission from the Court of Appeal.

“Prince Alwaleed believes today’s ruling is wrong and is not an accurate analysis of all of the evidence,” he said.

In her own statement, Sharab urged the prince to heed the ruling and pay her the $10 million without delay.

The prince is number 26 on the Forbes global ranking of billionaires. The U.S. magazine estimates his fortune at $20 billion while he says the figure is closer to $30 billion.

Through his Kingdom Holding Company, the prince owns large stakes in Citigroup, News Corp and Apple Inc, among other companies. He is also the owner or part-owner of luxury hotels including the Plaza in New York, the Savoy in London and the George V in Paris.

The prince had told the court he had direct access to Gaddafi and did not need Sharab to seal the Airbus deal, but judge Smith wrote that was “plainly ridiculous” on the evidence.

“It must have been very demeaning for the prince to realise that despite all his wealth and power he could not produce a result with Colonel Gaddafi,” the judge wrote. “The reason for that is plain: Colonel Gaddafi was equally strong-willed.”

The judge also noted that the prince had asserted in the witness box that he did not lie, yet the evidence showed that was not the case. The judge said he had taken this into account in assessing the prince’s reliability as a witness.

He pointed to a 2003 letter, signed by the prince, trying to persuade Gaddafi to buy the Airbus for $135 million. The letter said that represented the price paid by the prince to the Sultan of Brunei to acquire it, plus the cost of modifications.

The prince admitted in cross-examination the actual price had been $95 million and he had made no modifications, but denied lying. “You call it a lie, I call it a tactic,” he said.