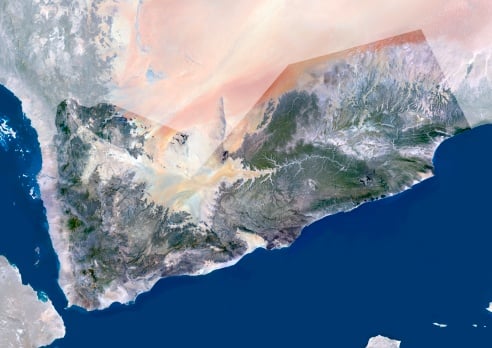 The humanitarian situation in Yemen has become catastrophic, relief officials said on Monday, as Saudi-led aircraft pounded Iran-allied Houthi militiamen and rebel army units for a second day, dashing hopes for a pause in fighting to let aid in.

Residents said warplanes flew between 15 and 20 sorties against groups of Houthi fighters and arms depots in the al-Dhalea provincial capital, Dhalea, and the nearby city of Qa’ataba, between dawn and 0900 local time (0600 GMT), setting off a chain of explosions that lasted for two more hours.

Fighting intensified on Sunday, after a lull following an announcement by Riyadh last week that it was ending its nearly five-week-old bombing campaign except in places where the Houthis were advancing, to allow access for food and medicine.

A coalition of Arab countries led by Saudi Arabia, rattled by what they saw as expanding Iranian influence in the Arabian Peninsula, is trying to stop Houthi fighters and loyalists of former President Ali Abdullah Salah taking control of Yemen.

But the air campaign has had little success and vital aid was reported to be being held up by both sides. Houthis were stopping convoys of trucks reaching the southern port city of Aden and an arms blockade by Saudi-led coalition navies searching ships for weapons was holding up food deliveries by sea.

“It was difficult enough before, but now there are just no words for how bad it’s gotten,” said International Committee of the Red Cross (ICRC) spokeswoman Marie Claire Feghali. “It’s a catastrophe, a humanitarian catastrophe.”

“The war and its results have turned Yemen back 100 years, due to the destruction of infrastructure … especially in the provinces of Aden, Dhalea and Taiz,” he told a news conference in the Saudi capital Riyadh.

Telecommunications within Yemen and with the outside world could be cut within days due to a shortage of fuel, state-run news agency Saba quoted the director of telecommunications as saying. Fuel shortages were also preventing traders from moving food to market, the United Nations’ World Food Programme said.

Fuel prices were as much as $10 per liter ($37.85 a gallon), and there was only enough to keep hospitals running for one more week and to prolong life-saving humanitarian operations for two weeks, the U.N. humanitarian agency OCHA said.

A commercial oil tanker has been waiting outside Yemeni waters since April 21 for clearance to dock, the U.N. said.

Saudi-led warplanes also struck the area around the presidential compound in Sanaa for a second day, while heavy street fighting was under way in the strategic city of Taiz in central Yemen, according to residents and the ICRC. There were no immediate reports on the extent of casualties.

The U.N. said mortar fire had reportedly been directed at a hospital in Taiz, where ambulances and mobile clinics were looted on April 25.

Hisham Abdul Wahab, a resident of a Sanaa district hit by a big blast last week, said he had tried but failed to stay on.

“Some people began returning to the neighbourhood, but the strikes began again and now they’re leaving a second time. The place is devastated: there are no roads, no water and no electricity. Nobody’s left but thieves,” he said.

Fighting has killed more than 1,000 people, including an estimated 551 civilians since the bombings started on March 26, the United Nations said on Friday. Its children’s agency UNICEF said at least 115 children were among the dead.

In Aden, a Saudi airstrike on a building where Houthi snipers had been based killed at least two civilians and wounded two others, residents and a local official said.

Medical sources and residents also said that Houthi fighters stormed into Aden’s al-Jumhouriyah hospital, the largest in the city, and that many patients fled the compound, apparently fearing it may be targeted by Saudi-led warplanes.

Saudi Arabia, the world’s top oil exporter and arch Sunni Muslim regional rival of Shi’ite Muslim Iran, says it was concerned for its own security and Yemen’s stability after Shi’ite Houthi forces captured the capital and began advancing across the country, on its southern border, in September.

The Houthis allege President Abd-Rabbu Mansour Hadi fostered Islamist militants linked to al Qaeda and corrupt officials. Hadi, who fought al Qaeda before fleeing the Houthi advance, says the Islamist militant group is as much a threat to Yemen as it had always been.

Riyadh says it wants to restore Hadi, now in exile in Saudi Arabia, and prevent Yemen disintegrating, with al Qaeda militants thriving in the chaos and one of the world’s busiest oil shipping lanes off the Yemeni coast at risk.

The fighting, which pits the Houthis against Sunni tribesmen and Islamist militants, with army units on both sides, has made life increasingly perilous for the country’s 25 million people, who rely on imports for more than 90 per cent of their food.

Residents said bread was in short supply in Aden and a convoy of trucks carrying flour from the Red Sea port of Hodeida was being prevented by the Houthis from entering the city.

The Houthis also blocked a convoy of ICRC trucks carrying medical supplies to Aden, but contacts were underway to allow the supplies in.

“Our convoys were blocked from going to Aden and Marib over the weekend and we are in discussions with the Houthis to resolve that,” another ICRC spokeswoman, Sitara Jabeen, said.

Residents said there were at least five air raids on areas under Houthi control in Marib and al-Jouf in northern Yemen and heavy clashes continued in Taiz, where armed Sunni tribesmen and Islamist fighters have taken back several districts from the Houthis in heavy fighting, according to residents there.

Residents said street battles were raging in the city of some three million, with both sides using tanks and artillery in residential areas. “The heaviest street fighting is taking place in Taiz. Airstrikes also continued in Aden,” Jabeen said.