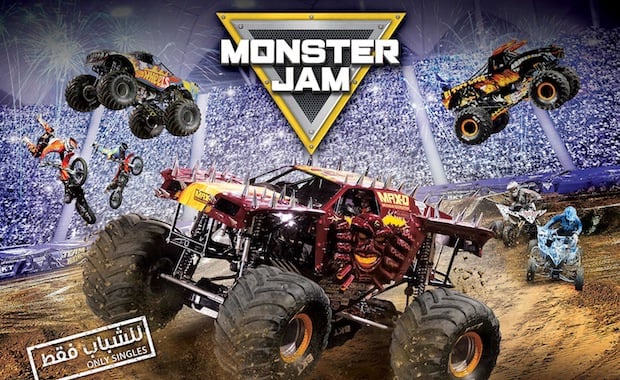 Saudi Arabia’s General Entertainment Authority has announced its support for the Monster Jam event set to take place this month in Riyadh.

Organised by Feld Entertainment Inc. and Live Entertainment, the event will be held at the King Fahd International Stadium in Riyadh on March 17 and 18.

The show will feature drivers in four-meter tall, five-tonne Monster Jam trucks. Built for short, high-powered bursts of speed, the vehicles generate 1,500 to 2,000 horsepower and are capable of speeds of up to 100 miles per hour.

Monster Jam trucks can fly across 130 feet, a distance greater than 14 cars side by side, and up to 35 feet in the air.

Tickets are priced from SAR30 onwards, a statement said.

“Monster Jam is just one of a number of upcoming events that the General Entertainment Authority is helping to bring to the kingdom that cater to all groups in our society and at an affordable price. More exciting announcements will be made in the coming weeks and months.”

The recently created General Entertainment Authority, established as part of Saudi Arabia’s Vision 2030 programme, is part of the kingdom’s efforts to diversify its economy.

In October, it supported a show by US dance group iLuminate in Riyadh and more recently, also backed the first-ever Comic Con event in Jeddah.