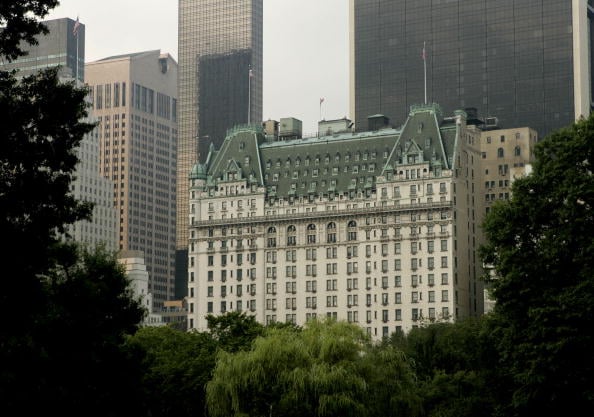 Bloomberg reports that the founder of Dubai-based family office White City Ventures, Shahal Khan, and New York landlord Hakim Organisation’s Kamran Hakim are the buyers in a deal set to be completed on June 25.

Khan told the new service that the two had worked on the acquisition, first reported by the Real Deal, for a three and a half years.

Indian-born British billionaires David and Simon Reuben are said to be providing a $415m loan for the transaction.

The property, on the southeast corner of Central Park, has a storied history after first opening 111 years ago.

It has featured in films including Home Alone 2 and was previously owned by US President Donald Trump, who sold it for $325m to a group led by Alwaleed in 1995 as part of a bankruptcy deal.

Under previous owner Elad Group part of the property was converted into condominiums while the hotel portion is managed by Fairmont Hotels, which became a unit of France’s Accor under a $2.9bn deal in 2016.

That arrangement also saw Alwaleed’s Kingdom Holding become a shareholder in Accor having previously owned part of the Fairmont, Raffles and Swissôtel brands under a holding company.

Alwaleed’s firm has sold off a number of hospitality assets in recent months including stakes in Four Seasons hotels in Beirut and Damascus.

Last week it reached a deal with partners to sell Movenpick Hotels and Resorts to Accor for $567m.

Read: Movenpick Hotels and Resorts to its associate firm AccorHotels

The Saudi billionaire was detained in November under Saudi Arabia’s corruption crackdown.

In an interview in March, he denied being tortured during his detention at Riyadh’s Ritz Carlton hotel but said he had reached a settlement deal with the government in exchange for his release.