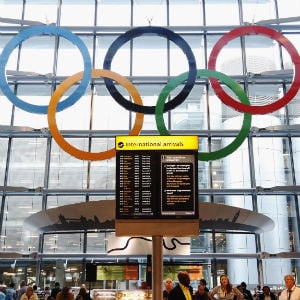 Saudi Arabia will allow its women athletes to compete in the Olympic Games for the first time ever in London this summer, the Islamic kingdom’s London embassy said on its website.

Human rights groups had called on the International Olympic Committee to bar Saudi Arabia from competing in London, citing its failure ever to send a woman athlete to the Olympics and its ban on sports in girls’ state schools.

Powerful Muslim clerics in the ultra-conservative state have repeatedly spoken out against the participation of girls and women in sports.

“I think this is a victory for Saudi sportswomen and hopefully it will promote sports and women’s health awareness for the Saudi society,” said Lina al-Maeena, co-founder of Jeddah United Sports Company, a rare women’s exercise club that runs a female basketball team.

In Saudi Arabia women have a lower legal status than men, are banned from driving and need a male guardian’s permission to work, travel or open a bank account.

Under King Abdullah, however, the government has pushed for them to have better education and work opportunities and will allow them to vote in future municipal elections, the only public polls held in the kingdom.

Saudi women will be able to compete in the London Olympics only if they reach the qualifying standard for their event, and the Games opens in just over one month, on July 27.

“The Kingdom of Saudi Arabia is looking forward to its complete participation in the London 2012 Olympic Games through the Saudi Arabian Olympic Committee, which will oversee the participation of women athletes who can qualify for the Games,” said a statement published on the embassy website.

The woman most likely to compete under the Saudi flag in London, show jumper Dalma Malhas, was ruled out on Monday when the World Equestrian Federation (FEI) said the 20-year-old’s mare Caramell KS had been sidelined by injury for a month during the qualifying period and had missed a June 17 deadline.

“Regretfully the Saudi Arabian rider Dalma Rushdi Malhas has not attained the minimum eligibility standards and … will not be competing” at the London Olympics, FEI secretary general Ingmar De Vos told the FEI website.

Malhas won individual bronze at the junior Olympics in Singapore in 2010, but without official support or recognition.

In April the head of the General Presidency of Youth Welfare, which regulates sport in Saudi Arabia, said it would not prevent women from competing but they would not have official government endorsement.

The government’s role would be limited to ensuring that Saudi women’s participation “is in the proper framework and in conformity with sharia”, he said.

The IOC said on Monday that talks with the Saudis were “ongoing” and that “we are working to ensure the participation of Saudi women at the Games in London”.

The head of the Kingdom’s Olympic mission, Khalid al-Dakheel, told Reuters on Sunday that he was unaware of any developments allowing women to participate.

Top Saudi clerics, who hold government positions and have always constituted an important support base for the ruling al-Saud royal family, have spoken against female participation in sports.

Physical education is banned in girls’ state schools in the kingdom, but Saudi Arabia’s only female deputy minister, Noura al-Fayez, has written to Human Rights Watch saying there is a plan to introduce it.