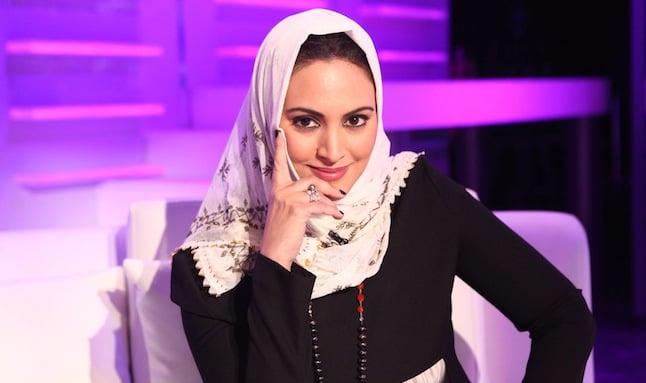 A female Saudi media personality has provoked heated debate in the kingdom after forcing staff at the justice department to serve her when she wasn’t wearing a face covering.

Muna Abu Sulayman, a co-host of a popular MBC show Kalam Nawaem, said she walked into the justice department in Riyadh wearing a hijab rather than the full-face niqab but was told to cover up by a clerk.

She responded by saying the kingdom’s crown prince, reformist Mohammed bin Salman, had said it was not necessary for women to hide their faces in an apparent reference to a March interview with US news channel CBS.

During the interview he was quoted as saying Islamic law did not specify that women wear a “black abaya or a black head cover”.

Sulayman, who is the former founding secretary general of billionaire Prince Alwaleed’s Alwaleed Bin Talal Foundation, detailed the exchange on her Twitter account where she has more than 530,000 followers.

“His comment was that I should not show off my face. I replied that I did not have the slightest make up on my face and that I was wearing sunglasses. The era of scaring women that they will not be served unless they cover their faces is over,” she said.

The department eventually relented after she spoke to three different staff members and gave her the document within 10 minutes.

She later deleted tweets related to the incident after reportedly receiving an apology.

“If a man cannot accept to deal with a woman who wears the hijab but does not cover her face, he should not work in a place where he has to interact with people,” Sulayman was quoted as saying in the local media.

Her tweets received a mixed reaction on social media with many responses supportive of her actions but others claiming there was no need to encourage rebellious behaviour.

“She had what she wanted, so there was no need to publicise and encourage other people to behave as they want, without restrictions or rules,” one user said.

A ban on women driving is expected to be lifted next month and women have been granted the right to start a business without their male guardian’s permission and attend football matches under other changes announced this year.

Efforts to get women into the job market are also continuing with the government offering subsidised childcare and transport to encourage employment.