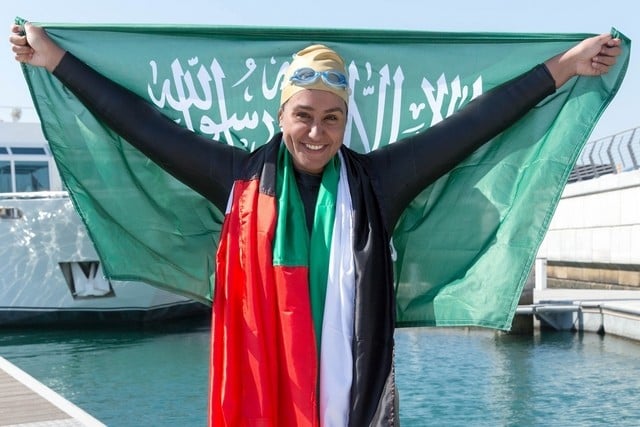 Saudi dentist and philanthropist Dr Mariam Saleh Binladen became the first person to swim across the Dubai Creek and Dubai Water Canal on Friday – a total distance of 24km.

Completing the feat in nine hours and 10 minutes, Dr Binladen undertook the challenge as part of her continued support of orphaned Syrian refugees. The special event was held under the patronage of His Highness Sheikh Hamdan bin Mohammed bin Rashid al Maktoum, Crown Prince of Dubai and chairman of the Dubai Sports Council. It was staged in collaboration with the Dubai Sports Council, the Dubai Maritime Authority and the Dubai Police and Marine Rescue.

Starting at 5am on Friday, Dr Binladen swam from the entrance to Dubai Creek in the Al Shindagha are of Dubai’s historic district, and finished at 2.10pm at Al Ghubaiba Station next to the Four Seasons Hotel.

“I want to extend my warmest appreciation and gratitude to HH Sheikh Hamdan bin Mohammed bin Rashid Al Maktoum for his gracious patronage of the event, and to the team members who worked really hard over the past month to make this great event a memorable success,” said Dr Binladen, according to official news agency WAM.

“This event is part of my continued pledge to raise awareness for the plight of thousands of orphaned Syrian refugees who have lost their parents and guardians, and have been uprooted from their homes, and scattered across different parts of the world,” she added.

“I also wanted to motivate more and more women from the Arab World to take on sports and use their talents to achieve the unachievable, knowing that nothing is impossible.”

In 2016, Dr Binladen became the first woman to officially complete the 163km length of the River Thames in London, UK.

“I wanted to show that a young woman from Saudi Arabia can achieve a lifelong ambition, while at the same time raise awareness to bigger causes, particularly the plight of thousands of suffering Syrian orphan refugees,” she said at the time.

During 2017 Dr Binladen aims to undertake more initiatives, working closely with the UNHCR – the UN refugee agency – and other humanitarian bodies.