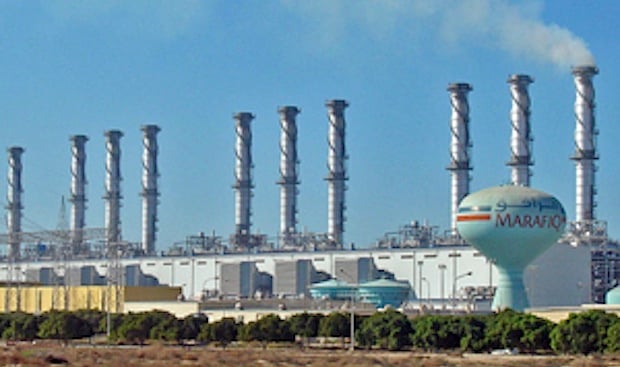 Saudi Arabian water and power utility Marafiq is seeking a financial adviser for acquisitions and other deals that could include the company floating a stake on the stock market, according to financial sources.

In the last few weeks Marafiq Power and Water Utility Company for Jubail and Yanbu has sent out a request to banks and other financial companies to pitch for a broader role on several transactions planned in the coming few years, the two sources said. They did not wish to be identified because the information is confidential at this stage.

The roles include acting as an adviser on a greenfield joint venture development with oil giant Saudi Aramco, which is a major shareholder in Marafiq. Another role would be advising Marafiq on a potential bid for assets being offloaded by Saline Water Conversion Corporation, another Saudi utility, the sources said.

Depending on the success of the deals, Marafiq might then proceed with a public share sale, they said.

The IPO, which could be in 2019, could raise around SAR1bn ($267m), one of the sources said. The other source said that after potential acquisitions, the company could be valued at as much as SAR4bn.

Marafiq did not respond to an emailed request for comment.

Water provision is one of four sectors Saudi Arabia is prioritising in a $200bn privatisation drive, along with electricity provision, sports and grain silos, Vice Minister for Economy and Planning Mohammed al-Tuwaijri told Reuters in April.

Marafiq is tasked with providing utility services to industrial, commercial and residential customers in the cities of Jubail and Yanbu, located on either side of the kingdom’s coast.

Marafiq is owned by its four major shareholders – the Royal Commission for Jubail and Yanbu, Saudi Basic Industries Corporation (SABIC), Aramco and the Public Investment Fund, the kingdom’s sovereign wealth fund, according to its website. The other shareholders are seven private sector investors.