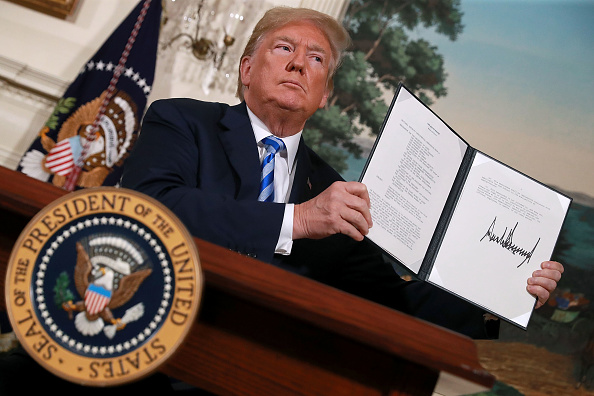 Saudi Arabia, Bahrain and the UAE have welcomed President Donald Trump’s decision to withdraw the United States from a nuclear agreement with Iran after years of warning that it gave their arch-rival cover to expand its regional influence.

The quick embrace of Trump’s announcement on Tuesday reflects a sense of vindication by the three countries, which have pushed Washington to take seriously Tehran’s ballistic missile programme and support for militant groups – security threats they regard as existential.

Ordinary Saudis rejoiced at the announcement, tweeting photos of Trump and Crown Prince Mohammed bin Salman with comments like “We prevailed”, “Game over”, and “Action, not words”.

“Paris and London may not like Trump’s decision, but how would the French or British feel if their capital cities came under direct threat by the Iranians?” Faisal Abbas wrote in Saudi Arabia’s English-language Arab News daily next to a headline that read: “The deal is dead.”

Ziad, a Saudi businessman, said the kingdom’s leadership was correct to question the 2015 nuclear accord which had eased sanctions in exchange for Tehran limiting its nuclear program to prevent it from being able to make an atomic bomb.

“Every couple of days we have missiles coming from Yemen and we see evidence that they are made by Iran…it is interfering in Syria, Yemen, Morocco. Other countries may accept that but here in Saudi Arabia we don’t accept that,” he said.

The UAE foreign ministry urged the international community “to respond positively to President Trump’s position to rid the Middle East of nuclear weapons and other weapons of mass destruction”, the state news agency WAM reported.

“This decision reflects the commitment of the United States to confront Iranian policies and Iran’s continuous attempts to spread terrorism in the region in full violation of international norms and laws,” Bahrain’s Ministry of Foreign Affairs said in a statement.

Sunni Muslim Saudi Arabia has been at loggerheads with Shi’ite Iran for decades, fighting a long-running proxy war in the Middle East and beyond, including armed conflicts and political crises in Iraq, Syria, Lebanon and Yemen.

The 2015 nuclear deal, known by its acronym, JCPOA, eased sanctions in exchange for Tehran limiting its nuclear programmep to prevent it from being able to make an atomic bomb.

Trump, echoing Riyadh and Abu Dhabi’s stance, has frequently criticised the accord because it does not address Iran’s ballistic missile program, its nuclear activities beyond 2025, or its role in regional wars.

Gulf Arab states were concerned that the deal was negotiated by countries outside the range of Iran’s ballistic missiles.

“Iran used economic gains from the lifting of sanctions to continue its activities to destabilise the region, particularly by developing ballistic missiles and supporting terrorist groups in the region,” the Saudi foreign ministry said in a statement.

It backed Trump’s move to reimpose sanctions and urged the international community to work towards a “comprehensive view that is not limited to its nuclear programme but also includes all hostile activities”.

Anwar Gargash, UAE minister of state for foreign affairs, wrote on Twitter: “Iran interpreted the JCPOA as concurrence of its regional hegemony. An aggressive Iran was emboldened as a result & its ballistic missile program became both offensive & exportable.”

Bahrain’s foreign ministry said the agreement was “characterised by several shortcomings, most important of which was not addressing Iran’s ballistic missile programme, or Iran’s threat to the security and stability of the region through its interference in the internal affairs of other countries as well as its support for militias in these countries”.

In his White House speech, Trump condemned Iran’s “sinister activities” including backing for groups like Hezbollah, Hamas, the Taliban and al-Qaeda – charges Tehran has denied.

Gulf Arab allies had endorsed the 2015 deal but expressed misgivings about decoupling Iran’s nuclear programme from its actions across the Middle East.

“There is likely to be a feeling of jubilation in Riyadh and Abu Dhabi that the Trump administration – or at least the White House – has now come round to their thinking on Iran’s threat to regional security,” said Kristian Coates Ulrichsen, fellow for the Middle East at Rice University’s Baker Institute.

Prince Mohammed, who serves as the kingdom’s defence minister, told CBS News in March that his country would “without a doubt” develop nuclear weapons if Iran did so.

Iran has ruled out renegotiating the accord and threatened to retaliate, although it has not said exactly how, if Washington pulled out.

It may do so by undermining the interests of Washington and its allies in the Middle East including by increasing support for Yemen’s Houthi armed movement, possibly provoking a military response from Saudi Arabia and the United Arab Emirates.

“There is a real risk of escalation, especially between Iran and Israel. While the Gulf states may want to see the US and Israel try to cut Iran to size, I don’t think they want to get dragged into a direct confrontation themselves. The consequences could be severe,” said Joost Hiltermann, programme director, Middle East and North Africa at The International Crisis Group.

Iman Taher, a Yemeni teacher, fears Trump’s decision will only inflame conflicts in the region. “Iran will not accept and it will respond and increase its support for the Houthis in Yemen and its allies in Syria and Lebanon.”