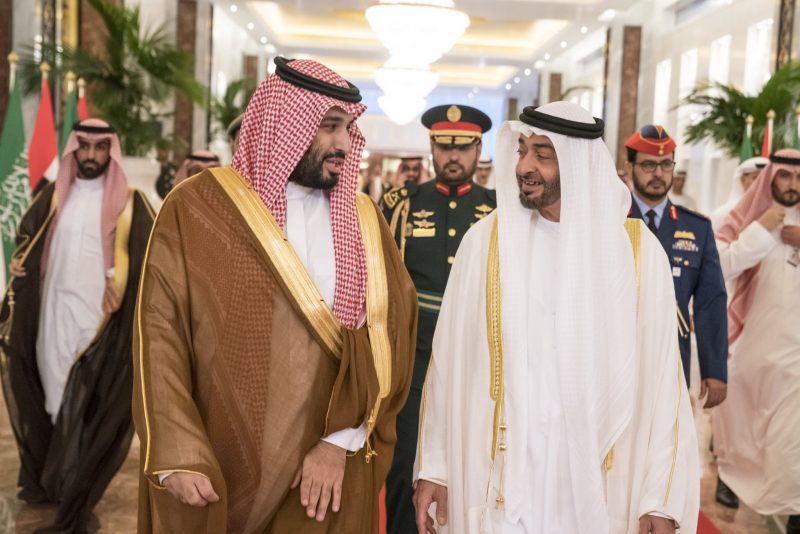 Saudi Crown Prince Mohammed bin Salman arrived in the UAE on Wednesday for an official visit – his second this year.

He was welcomed by Abu Dhabi Crown Prince Sheikh Mohamed bin Zayed, and the two leaders held talks on regional issues and on ways to strengthen mutual relations.

Mohammed bin Salman arrives at Qasr Al Watan in Abu Dhabi, where he is accorded an official reception. pic.twitter.com/OpOMS2JYar

They also presided over the second meeting of the Saudi-Emirati coordination council in Abu Dhabi to achieve “full integration in economy, knowledge and human development, and military”, official news agency WAM reported.

The meeting reviewed progress of the council works, as well as the proposed initiatives and projects. The leaders also signed four MoUs.

Mohammed bin Salman and I witnessed the exchange of 4 MoUs and reviewed 7 strategic initiatives during a Saudi-Emirati Coordination Council meeting. pic.twitter.com/xGqrAudQaS

“Today, we have 20 joint development field in the economic, security, human development and others domains.

He added: “We have worked over the past years to make a qualitative strategic shift in our bilateral relations, and we will continue on this path towards building a better future that achieves security, prosperity and overall development for our countries and peoples.”

Meanwhile Prince Mohammed bin Salman said both the countries had a lot of look forward to next year.

“2020 is the year of international achievements. We are preparing to host major international events. Saudi Arabia taking over the G20 presidency and the UAE is playing host to Expo 2020, reflecting the rising international stature enjoyed by the two countries,” WAM quoted him as saying.

Prince Mohammed bin Salman also extended an invitation to the UAE to participate as  a guest of honour in the upcoming G20 Summit, to be presided over by the kingdom.