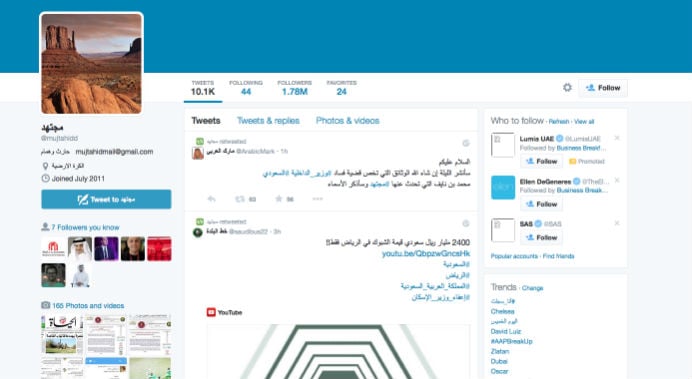 A mysterious Twitter user in Saudi Arabia who frequently criticises the royal family has started tweeting from his account after it was briefly suspended last week.

The user, @mujtahidd, told AFP that his account was suspended by Twitter because of a “private document” related to the royal family that he published in April 2014.

“I explained to Twitter administrators my high profile as a credible whistleblower from within the circles of power in Saudi Arabia,” he said.

The anonymous whistleblower, who has close to 1.8 million Twitter followers, has revealed several documents relating to Saudi royalty and according to AFP, also broke the news about King Abdullah’s death before it was officially announced.

In an interview with the BBC, he said that his aim is to “expose corruption, injustice and hypocrisy.”

“Activists then use the knowledge I provide them with to convince people to take action towards reform. I also use my credibility and number of followers to retweet any positive activities by these reformers.”

However, @mujtahidd said that he is not worried about his identity being leaked to authorities.

“I’m not afraid. Not because I’ve taken precautions but because I’m almost certain that the government knows who I am. But they don’t want to reveal my identity in fear of a scandal,” he told the BBC.