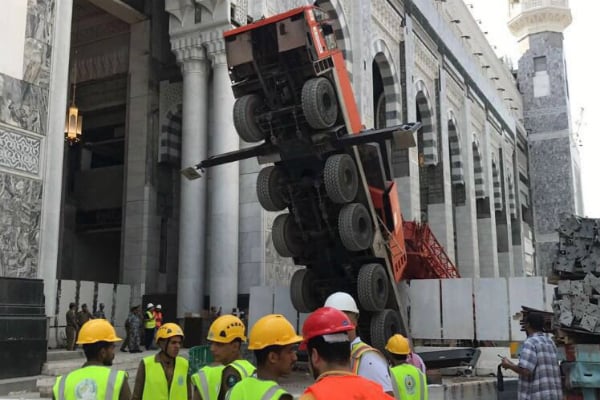 The manager of Makkah’s Grand Mosque has said a mobile winch collapsed on the premises on Sunday.

The incident followed a deadly crane collapse at Islam’s holiest site in September 2015, which resulted in the deaths of more than 100 people and injuries to nearly 240 others.

The General Presidency of the Grand Mosque and Prophet’s Mosque said that that the accident occurred at 2:30pm, according to Saudi Press Agency.

The mobile winch was working in an “isolated zone” in the vicinity of gate 160 of the mosque’s third expansion project and slipped “due to overload”.

The driver suffered “slight injuries” but there were no other reports of injuries nearby to workers or civilians.

In 2016, local media reports said an engineering consultancy firm warned of the risks associated with having numerous cranes around Makkah’s Grand Mosque in a technical report submitted to the Bureau of Investigation and Public Prosecution.

The 14 staff originally reported to be on trial were said to comprise six Saudis, including one billionaire, two Pakistanis, a Canadian, a Jordanian, a Palestinian, an Egyptian an Emirati and a Filipino.

Binladin Group’s defence team claimed the company could not have predicted the severe thunderstorm and violent winds that caused the crane to fall, according to Arabic newspaper Asharq Al Awsat.

Expansion work at Islam’s holiest site has since continued after a previous ban on government contracts enacted on Saudi Binladin as punishment was lifted.