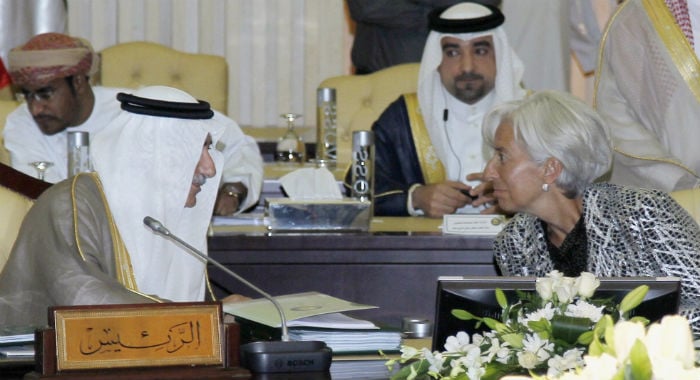 International Monetary Fund forecasts that Saudi Arabia’s budget surpluses will gradually decline before dropping into deficit by 2016 are a “doomsday scenario”, the Kingdom’s Finance Minister Ibrahim Alassaf said on Saturday.

The world’s top oil exporter has run large budget surpluses since 2009 but the IMF said in a report last month that falling energy prices would hurt the Kingdom’s fiscal position.

“They have been working on scenarios assuming, I would say, a doomsday scenario which I don’t agree with. But we appreciate they are raising these issues in order to be ready,” he told reporters after a meeting with IMF managing director Christine Lagarde in Riyadh.

In its report, the IMF said its base scenario envisaged a fiscal deficit of 0.6 per cent of gross domestic product by 2016, compared to the budget surplus of 12 per cent of GDP it predicts for this year.

Alassaf said Saudi Arabia was ready to tap its foreign currency reserves, equivalent to more than 100 per cent of GDP, if energy prices fell.

“We are ready for that, for these circumstances, through building the appropriate reserves in order to be ready for any adverse developments in the oil market,” he said.

The IMF has said its forecast was based on oil prices retreating as the Eurozone debt crisis weakens the global economy and saps energy demand.

It cautioned the forecast, which included the deficit widening to 2.5 per cent of GDP in 2017, involved great uncertainty.

Although Saudi Arabia has built large surpluses since oil prices crashed during the global financial crisis in 2009, its spending has also increased sharply, with significant additions to the government payroll.

Alassaf said he was not willing to speculate what Saudi Arabia’s budget surplus or deficit may look like by 2016.