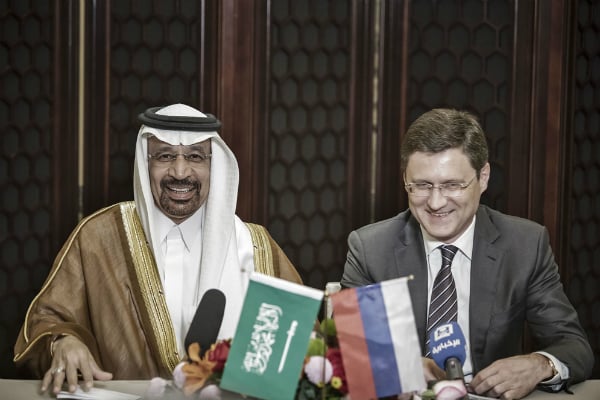 Saudi Arabia and Russia’s energy ministers have discussed amendments to current compliance monitoring as they prepare to increase production under an oil deal between OPEC and non-OPEC countries, state-run Saudi Press Agency reported.

The call comes amid confusion in global oil markets after the White House backtracked on comments from US President Donald Trump suggesting Saudi Arabia had agreed to increase oil production by 2 million barrels per day to lower global prices.

In a telephone conversation on Monday, Khalid Al-Falih and his Russian counterpart Alexander Novak discussed plans to increase oil production backed by members during a meeting on June 23.

Under the “reduction of production agreement” discussed, the average level of commitment to the production deal enacted in 2017 will be reduced from 147 per cent in May this year to 100 per cent from July 1, equivalent to an increase of about one million barrels per day, SPA reported.

The two also spoke of the need to “amend the current monitoring procedures to reflect the agreed target of adjusting the average gross commitment to 100 per cent” and “agreed to continue close coordination and consultation between them, and among other producing partners in the Declaration of Cooperation in the interest of producers, consumers and the global economy”.

Saudi Arabia had previously indicated it could step in to alleviate any shortfall in oil supply amid falling production in Venezuela and expected US sanctions on Iran.

Iran has opposed any oil production increase by other members of the agreement and said last month the June 23 meeting did not specify any rise.

Separately on Tuesday, UAE energy minister Suhail al-Mazrouei said that OPEC would aim to adhere to the group’s “overall conformity levels” for the rest of 2018, according to Reuters

He also stressed that the country was willing to step in to help alleviate any possible supply shortage.

The UAE’s main producer Abu Dhabi National Oil Company said in a statement it had the ability to increase oil production by several hundred thousand barrels per day if required and remained on track to reach 3.5 million bpd by year-end from current levels of 3.3 million bpd.

Reuters cited industry sources as confirming UAE production was at 2.87 million bpd in July, meaning it has the potential to boost supplies by 400,000 bpd.

International benchmark Brent has risen gradually over the last week from around $74 to just under $78 amid fears of a supply shortage.